Bluetooth devices that let you gab while you drive — Part 2

It’s about to get very expensive for Ontario citizens who like to yak on their cell phones while driving.

Read Part 1 of this story: How drivers can avoid getting a ticket for using a cell phone

CHECK OUT OUR SITE TOMORROW FOR THE THIRD AND FINAL PART OF THIS FEATURE.

This Fall, Ontario is joining other Canadian provinces and several U.S. states in banning the use of handheld electronic devices by drivers.

You could, of course, pay around $30 for a wired headset to get around the new rules, but most people I know hate being physically tethered.

With that in mind, we collected a few Bluetooth handsfree gadgets to see how they perform. Bluetooth, for the uninitiated, is a short-range radio technology developed to allow devices to talk to one another, and most cell phones (and many other devices) now contain a Bluetooth radio. Here’s a look at some of the ways you will legally be able to continue to gab while driving.

These little doodads are more earpieces than full headsets, and there are dozens on the market. They’re not only useful with cell phones; they can pair with Bluetooth-equipped music players as well. We checked out a few to get an idea of what you can expect at various price points. 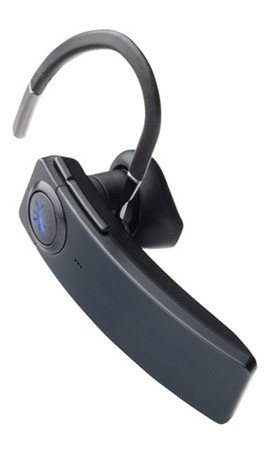 The BlueAnt Q1 is a sleek device, with only one button on the front (adorned by, yes, an illuminated blue ant) and volume controls on the side interrupting its smooth black curve. It comes with large and small ear gels (removable covers for the bit that goes into your ear), an earhook (which you may choose not to use), a USB cable and an a/c adapter.

It, like most of the others in this roundup, supports a feature called MultiPoint: it can store pairing information for eight devices, and can connect with two simultaneously. That’s really handy for people who have to carry both personal and business cell phones, or who use a cell phone and also want to use voice over IP (VoIP) telephony on a Bluetooth-equipped laptop without having to carry multiple headsets.

The Q1 has a little secret – it’s in part voice controlled. To answer a call, you can either push the button or just say “Answer” or “Ignore”. To hang up, double-click the button. I’m not crazy about the double-click part – the button has a relatively soft touch, but it’s still awkward double-clicking something stuck in your ear without dislodging it.

A single click of the button will result in a voice inviting you to “say a command”, and you can then ask about battery status, pair with another device, call one of eight speed dial numbers, or even turn the headset off. Noise suppression allows clear conversations despite wind noise. I found it doesn’t do as well with thumps as it does with a steady hum or hiss, however I stood right next to an operating air conditioner and the person I was speaking to didn’t hear the rumble.

The smaller of the two ear gels fit me relatively well, but the earhook was still useful (see my comment on double-clicking). The headset only weighs 8.7 grams without the ear hook, and 10.9 grams with. You get about 4 hours talk time, and standby is rated at up to 100 hours. 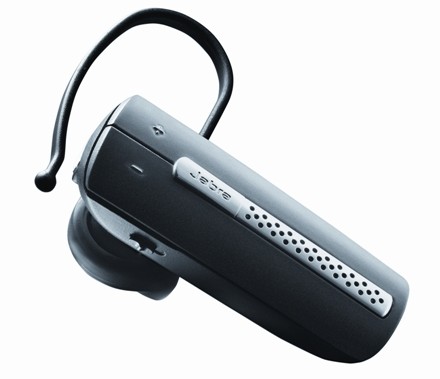 The BT530 is smaller than the BlueAnt or Jawbone, and has a line of shiny latticework down the centre of its black body that covers the main button and the microphones. Unlike the aforementioned duo, it has a dedicated on/off switch on the side; its volume controls span the top front of the unit (tapping a volume control while not on a call gets you an indication of remaining battery life). It sounds rather busy, but is actually quite attractive.

It, too, supports MultiPoint, and my BlackBerry reported it as a stereo audio device. Rated battery life is about 5.5 hours, with a whopping 250 hours of standby.

Sound quality was good and clear, with something called Audio Shock Protection to defend against sudden increases in volume that could damage your hearing. Jabra also offers noise suppression technology that does the trick in eliminating background noise in most conditions.

The controls were easy to manage. The basics are in the quick start guide in the box, though you have to visit Jabra’s website to download the full manual. If your phone offers advanced features such as voice dialing, the headset will support them.

I found this unit fit my ear very well, and external sounds were not muffled when I was not on a call as they were with some of the other units. It comes with a large collection of variously-sized ear gels, as well as two earhooks to choose from. 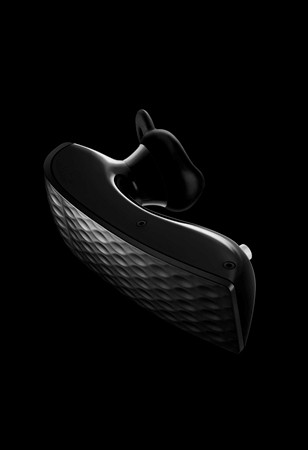 The Jawbone Prime is similar in size and shape to the BlueAnt, but its textured surface (available in black, or several designer colours; “Drop Me a Lime”, anyone?) is unmarred by buttons. Instead, a tiny crease marks the location of the main switch, and a second button, controlling noise suppression as well as a number of other functions, lives beneath the top edge. Even the Bluetooth light is hidden, although you can turn it on if you want to.

A white button (the Voice Activity Sensor) touches your face when the earpiece is in place, and detects when you’re talking.

Sound quality was good; it even coped in a busy shopping mall. However, despite a generous selection of six ear gels to choose from, I was unable to keep it from falling out of my ear without the included earhook (your mileage, of course, may vary). At 10 grams, the unit was certainly light enough.
Like the BlueAnt, the Prime supports Multipoint; it can pair with up to eight devices, and can be connected to two at once.

Its battery life is about average, at 4.5 hours talk time, and eight days standby, but it charges delightfully fast (less than one hour). Unlike the other units, which use some sort of USB connection for power, the Prime’s charging cable terminates in a little cradle that mates with contacts at the top of the unit.

My major frustration with the Prime was with the position of one of its buttons. Every time I grabbed for the earpiece as it fell out yet again, or tried to adjust it in my ear, I managed to click the top button. Since that button controls volume, last number redial and voice dialing, that caused some surprises. I also found it difficult to tell whether the unit was on or off, since there is no indication when you press the switch. 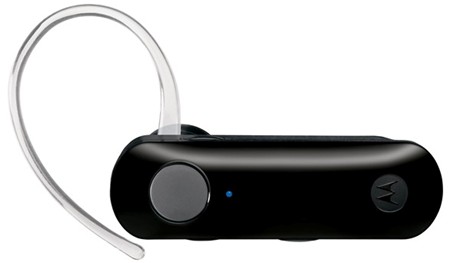 We checked out these two kindred Motorola units to determine what an extra few dollars would buy. 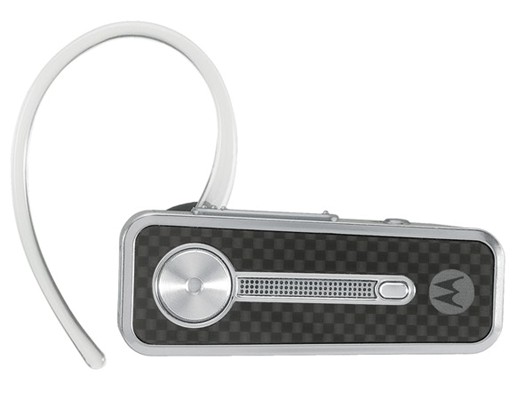 The higher-end H780 is about the same size as the Jabra, with retro-looking detailing on the front, while the H390 is slightly larger, and a more mundane plain black. Both have dedicated power switches, volume controls and call buttons. The H780 adds a Noise Cancellation button; it also supports MultiPoint.

Both units require earhooks. I found the H780 was a bit more comfortable to wear.

The big difference, of course, was in sound quality. Although the H390 did an adequate job, sounds were not as clear as on the H780, and in any but the quietest environments I noticed the lack of noise cancellation technology in the H390.
Battery life is up to a generous 7 hours talk and up to 8 days standby for the H780, and the less feature-rich H390 boasts up to 8 hours talk time, and up to 200 hours standby (just over 8 days).

For drivers who don’t want to always wear an earpiece, a visor-mounted handsfree device can be just what the doctor ordered. These units will not only pair with your phone, but with Bluetooth-equipped MP3 players. A couple even have built-in FM transmitters to let you use your car stereo’s superior speakers. 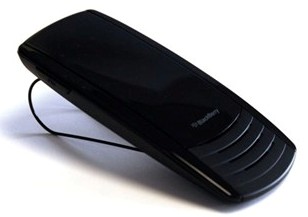 The new BlackBerry Visor Mounted Speakerphone (VMO) boasts a clean design and the ability to not only act as a speakerphone, but to stream music (or calls) through the car radio, thanks to its FM transmitter. It was amazingly easy to use.

Its top is one big button so you don’t have to take your eyes off the road to figure out what to push. It supports voice dialing, and when you receive a call it not only alerts you, it recites the originating number. It will also convey driving directions if you have a GPS application on your BlackBerry.

The device comes with a car charger only, and needs about two hours to juice up – an irritation for commuters who aren’t in the car that long at a stretch.

The curly cord isn’t long enough for it to charge while clipped to the visor.

The device can be charged with a BlackBerry smartphone’s travel charger as well as with its own car adapter.

Rated talk time is up to 13 hours.

The sound quality was clear, and it, too, offers the noise suppression and echo cancellation that is quickly becoming standard in all but the most bargain-basement devices of its ilk.
Although it takes advantage of BlackBerry features, it will pair with most standard Bluetooth phones and use whichever features they natively sport.

CHECK OUT OUR SITE TOMORROW FOR THE THIRD AND FINAL PART OF THIS FEATURE.

Lynn Greiner
Lynn Greiner has been interpreting tech for businesses for over 20 years and has worked in the industry as well as writing about it, giving her a unique perspective into the issues companies face. She has both IT credentials and a business degree.
Previous article
HTC Dream – a powerful iPhone contender
Next article
Five free apps that make project management a breeze

Several problems stand in the way of marketers and IoT utopia