Modern medicine and technology go hand-in-hand. For years, we’ve come to associate a hospital not only with the patients it houses and medical professionals who work there, but also the machines and gadgets that aid doctors and nurses in our care.

As we see in person, or on episodes of ER, we recognize the blood-pressure sleeves, the beeping heart-rate monitors, and IV machines. 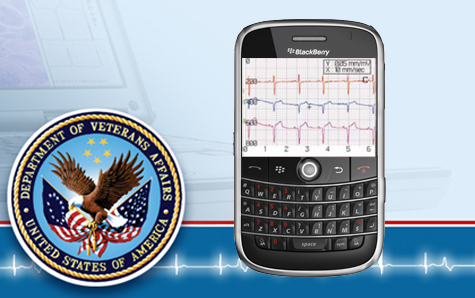 But wireless technology is really just now coming of age in the medical field. For example, emergency room physicians and surgeons are some of the few modern professionals who still carry around pagers. Yes, pagers.

That seems to be changing, however. In fact, doctors and nurses are surrendering their antiquated gadgets of yesterday in exchange for today’s powerful, cutting-edge smartphones, says Fraser Edward, BlackBerry-maker Research In Motion’s (RIM) Manager of Market Development for Healthcare.

Many medical professionals have resisted the move from traditional “feature” cell phones, pagers, recorders and other “old-school” gadgets to smartphones due to security concerns and comfort with existing technologies, says Edward. This made BlackBerry an attractive device for moving to the next wave of mobile technology. RIM has a reputation in the mobile industry of having the strongest (and most strict) security safeguards.

The Washington D.C. Veterans Affairs Medical Center is one of the U.S. Department of Veterans Affairs’ (VA) 153 nation-wide medical centers. The department also has some 737 community-based outpatient clinics, 225 vet centers, 135 nursing homes and 47 “domiciliaries.” (About half of all U.S. healthcare professionals have some sort of VA training, including more than 65% of practicing medical doctors, according to the VA.)

Aside from being big, the department has also made a lot of news the past year. During his campaign for the White House, President Obama made medical and psychiatric care for veterans a high priority in his platform. He wanted them to be operating in a more comprehensive way, and, as it likely implies, that means staff must communicate effectively. 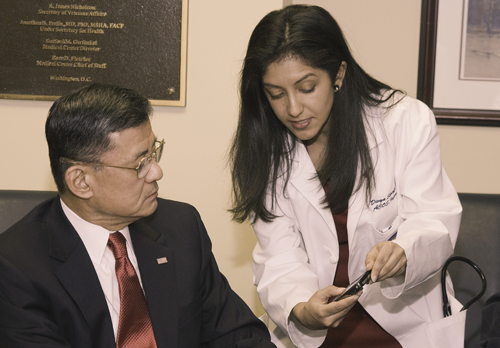 That’s where Dr. Shroff comes in. She came to DCVAMC as an internal medicine physician a little more than six years ago. She quickly “fell in love with the IT side of medicine,” and has become the center’s de facto “CMIO,” or Chief Medical Information Officer. She works closely with the center’s CIO, but still regularly sees patients.

“The U.S. VA has been on the cutting-edge of technology advancement for the past decade,” Shroff says, citing its widespread use of electronic medical records (EMR), as an example. The DCVAMC’s Electrocardiogram (EKG) Smartphone Project is just the latest illustration of the VA’s commitment to medical technology, according to Shroff.

Due to the department’s robust EMR initiative, much of its patient data is already available electronically. Such an online format creates fewer challenges in the effort to bring such information to mobile devices, Shroff says.

Why Cardiologists and Why mVisum?

In the consumer world, mobile devices are hot. Reviewers drool over Apple’s iPhone, the Palm Pre and BlackBerry handhelds. As she watched the evolution of smartphones, Shroff started to envision ways in which they could be used to help DCVAMC’s staff do their jobs better and more effectively.

After some research, perusing the available smartphone applications and the mobile platforms on which they run, Shroff decided on mVisum and BlackBerry. She saw huge potential in the app for cardiologists and their patients.

RIM’s proven security safeguards built into its BlackBerry Enterprise Server (BES) also made BlackBerry devices a natural choice–though Shroff was quick to note that neither she nor the VA is not stuck on BlackBerrys by any means. (Shroff and the cardiologists using mVisum all employ BlackBerry 8820 devices.) 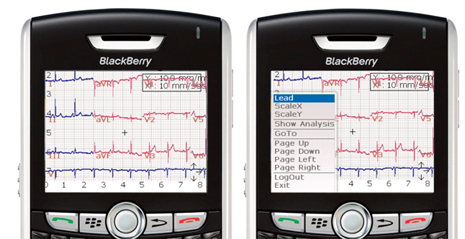 Dr. Shroff and her team at DCVAMC launched mVisum in January 2009. mVisum helps cardiologists remotely diagnosis heart-attack-types and quickly communicate with relevant people who are working to help the patient. mVisum can vastly decrease the time it takes to get patients into appropriate treatment by making high-quality–and secure–EKG readings available to cardiologists on their smartphones.

This way, they don’t necessary need to be inside the hospital. In the past, DCVAMC staff had to first locate–and occasionally wake up–off-site “interventional cardiologists” and then determine the quickest and most efficient way to distribute EKGs for diagnoses. One other upside: mVisum can also potentially reduce hospital stays for patients, saving time and money for all involved, and getting those patients home faster.

To sum up a fairly complex subject, there are various types of heart attacks, most of which require immediate treatment or else the chances of full recovery drastically decrease.

“A severe heart attack caused by a prolonged period of blocked blood supply that affects a large area of the heart. These attacks carry a substantial risk of death and disability and call for a quick response by many individuals and systems.”

A STEMI requires a “door-to-balloon time” of 90 minutes. This is the total time between when heart-attack patients arrive at the medical center admittance desk and when accurate diagnosis is made and treatment administered. If it takes longer, recovery rates drop dramatically. In general, the faster heart attack patients–especially victims of STEMIs–are tended to and treated, the less damage to the heart tissue and the better chance for a positive outcome, according to the VA.

mVisum securely delivers high-quality electrocardiogram (EKG) images, as well as built-in messaging capabilities, to cardiologists who are away from the hospital. It’s both simple to use and fully compliant with the Health Insurance Portability and Accountability Act (HIPAA).

mVisum integrates with a few existing DCVAMC systems, including the organization’s GE MUSE server, a cardiology information system, its VistA digital imaging system, and the DCVAMC’s BES. This is important for the continuity of information.

For example, an EKG taken in one of the center’s hospital rooms is simultaneously transmitted via MUSE to the VistA imaging system and the mVisum server on site. The BlackBerry server then retrieves that EKG when the appropriate cardiologists logs into the app and requests it. No EKG or other sensitive information is ever stored on physicians’ BlackBerrys. 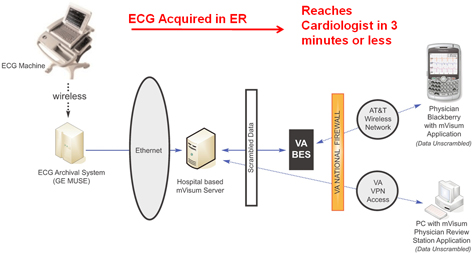 As for costs, mVisum says it depends on the nature and size of the configuration. Though not providing specifics, she said the price was “reasonable.” Interested parties should contact mVisum directly for more information.

The DCVAMC’s two main objectives in launching mVisum were to maintain security and preserve image quality while providing remote access to EKGs, Shroff says. On one hand, the DCVAMC must legally protect its patients’ personal medical information.

And on the other, provided you shore up the security angle, an EKG on your phone is worthless if it’s not readable or (worse) serves up inaccurate results, according to Shroff.

DCVAMC doesn’t employ any third-party BlackBerry security products or firms, because it feels secure enough relying on the safeguards built into both its BES and mVisum server.

“We put a lot of emphasis on patient security, but in reality it’s much more important to save their lives,” Shroff says “There’s no way you could do something like this and not prove that it works. Like a new drug, it must go through trials before approval. That’s the same concept that needs to be applied here.”

So that’s exactly what Dr. Shroff and her team did for mVisum’s clinical verification. DCVAMC cardiologists retrieved and analyzed 506 EKGs via BlackBerry smartphone with the following results:

Shortly after the trials were deemed a success, Dr. Shroff and her team went live with mVisum in January 2009.

While the DCVAMC chose BlackBerry smartphones because of the aforementioned security strengths, Dr. Shroff won’t limit the hospital to one phone or mobile platform; she’s interested in any device that helps doctors serve their patients–as long as those devices meet the VA’s strict security standards.

Devices with larger screens, like Apple’s iPhone, could be better suited for interpreting medical images and reading small text in the future, she says. She considered the touch-screen BlackBerry Storm, but concerns over hardware functionality quickly turned her off that option. 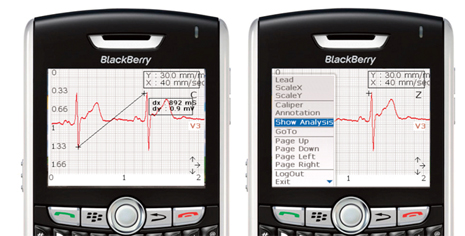 The motivation behind mVisum and any other mobile application DCVAMC might launch in the future is to improve patient-care overall, as well as to empower those patient to take a more active role in their own healthcare, Dr. Shroff says.

She sees many of the tasks currently being performed on laptops in medical settings making their ways to smartphone platforms as well. Possible future uses for mobile applications for physician’s include remote order entry, remote chart changes, and the ability to read and make notes in real-time on medical materials from anywhere, to name a few, Dr. Shroff says.

On the patient side, Dr. Shroff envisions a future where all or most of the paper work typically required when new patients check in could be filled out via patients’ smartphones.

This would reduce the need for paper, and further speed up the admittance process–though she admits such a reality is very likely a long ways away. That said, the DCVAMC is already working on an iPhone application for patients, though Dr. Shroff didn’t share specifics.

“Right now, we’re using [smartphone technology] in a really small application to see if we can make a difference,” Dr. Shroff says. “But the potential for much more is there.”

For stability and performance Snow Leopard is the cat's meow

Some slacking off can make you more productive at work