BlackBerry board ready to oust founders as co-chairmen: report

BlackBerry maker Research in Motion is reportedly on the verge of announcing a corporate shakeup that could see co-founders Mike Lazaridis and Jim Balsillie relinquish their titles as co-chairmen.

RIM agreed to review its corporate structure during its last annual general shareholders’ meeting, narrowly avoiding a public confrontation. The results of the review are due to be announced by the end of January, RIM told Techworld in an emailed statement. The board will then have 30 days to publicly respond. 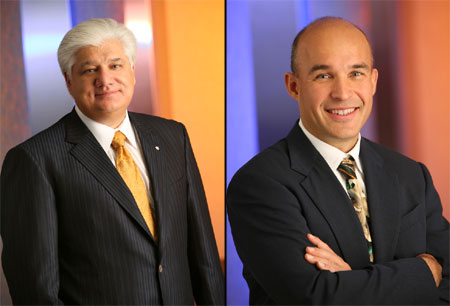 Mike Lazaridus (left) and Jim Balsillie are the embattled co-CEOs at RIM.

RIM did not comment on Stymiest being named a frontrunner to take over the chairmanship.

The rumours follow a turbulent year for RIM, with the company having to deal with a number of technical faults that left millions of customers around the world without their BlackBerry services. RIM has also been forced to delay the launch of its QNX-based BlackBerry 10 smartphones until the second hald of 2012, citing hardware issues. Rumours before Christmas suggest that the company simply doesn’t have a working product yet.

Meanwhile, RIM’s share price plummeted 75 percent last year, after a series of profit warnings and the botched launch of its PlayBook tablet computer. Some RIM shareholders are now calling for the company to put itself up for sale or be broken up.

The campaign is being led by the activist shareholder Jaguar Financial, which previously called for the company to sack its chief executives amid the devastating service outages last year. “It really is a propitious opportunity for value investors to step in, because RIM is worth a heck of a lot more than what it’s currently trading at,” the company’s chief executive, Vic Alboini, told the BBC.

Lazaridis and Balsillie could be difficult to shift, as they own 12 percent of RIM’s outstanding shares, making them the second and third largest shareholders the company. So far they have retained the support of the company’s seven independent directors, despite the numerous setbacks.

The company said last month that it plans to launch an aggressive marketing campaign in the first half of 2012, in an attempt to reinvigorate the BlackBerry brand.

Sophie Curtis
Previous articleRocketr science: How to make a winning
Next articleGoogle downgrades Chrome search results for breaking own rules