That’s what Jacob Blackstock bet on when in 2008 he founded Bitstrips.com, a site that provides online tools for the easy creation and sharing of user-generated comic strips.

To date, there are more than 200,000 subscribers to the free Toronto-based site which generates over 20,000 comics each day, or a total of about four million strips in the last two years. BitStrips is one of this year’s nominees to the 2010 Canadian New Media Awards (CNMA) for Promising New Company of the Year. It has also recently been adopted by some 32,000 teachers in Ontario as an alternative reading and writing instruction tool.

Bitstrips for Schools from Bitstrips on Vimeo.

“We certainly welcome the recognition. It’s good to know that someone is noticing us,” Blackstock says of the thumbs up from Ontario teachers and his company’s nomination to the CNMA. The awards show is now in its 10th year, and recognizes Canadian businesses that excel in several categories including: Best in Digital Media Technology; Best Mobile Application; Best Online Advertising; Best in Social Media; and Community Campaign of the Year among others.

While no monetary prizes are involved, exposure through the awards is a great boost for nominees and winners, according to Mark Greenspan, executive director of the CNMAs. He said it helps companies gain prestige and distinguish themselves from competitors.

Who said you need to be an artist to be a cartoonist? With BitStrips, users can pick a character from the site’s roster of online avatars and customize them to suit taste.

Users drag the characters to a composition window where they can add text or speech bubbles and incorporate backgrounds.

Once completed, the comic strips can be saved to an account and published online, or printed or emailed and even posted to a blog. From there, BitStrips becomes something like the YouTube of comics, where Internet users can view strips or follow their favourite artists. Some Bitstrippers also post their creations on their Web sites of Facebook pages.

“This is for the budding artists, those who want to practice a skill, people who just want to have fun or recapture their childhood,” said Blackstock.

BitStrips developed a Flash/PHP-based tool to generate the characters and comic strips. The company employs Amazon Web Services for storing all the data generated by the users.

“Cloud services have no cap on data size. Storage can easily be scaled down or up depending on the demand,” said Blackstock.

Learning to make comics in school

But comic relief might also have a place in the corporate world, Blackstock says. He foresees companies adopting BitStrips to create training materials for their employees.

While Bitstrips is free, the company has launched a paid subscription model which is now being used on schools in Ontario and in a few other Canadian provinces.

A single subscription to Bitstrips for Schools sells for $9.95/month. Principals and school boards get volume discounts at around $750/month for 500 students when they purchase more subscriptions for an entire school or school board, said Blackstock.

BitStrips for School comes with special administrative features that allow teachers to adopt the comic making tool as a teaching aid, he said. 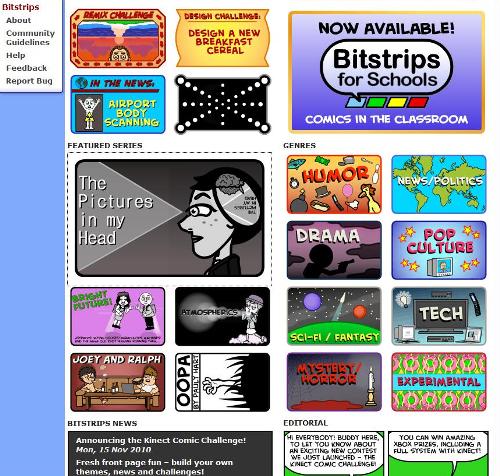 For instance, aside from creating and dressing up characters: users can import photos or get copyright-free images from Flickr; share, mix and collaborate online on projects; and access the comics from the classroom or home.

“Bitstrips for Schools is a great motivational tool for reluctant writers,” according to Lindsay Porter, a teacher at Byngmount, Beach Public School in Mississauga, Ont.

“Students who would normally shut down at the thought of a traditional writing assignment end up asking to stay in at recess to work on their comics,” she said.

Nestor Arellano
Previous article
Video Rewind: David Suzuki gets fired up about green IT
Next article
Choosing a secure cloud provider for your small business