Social intranet company Bitrix Inc. is the latest to enter the cloud storage and collaboration desktop application space with the release of new apps for Windows and OS X today, taking aim at some big brand players in the online space including Google Drive, Microsoft OneDrive, Dropbox and Box.net.

The twist added to the requisite online storage space that can be accessed via the web and mobile apps is a set of communication and collaboration tools offered by Bitrix24. There’s document sharing, editing, and collaboration tools that users of other cloud storage services will be familiar with. But there’s also instant messaging, group chat, VoIP telephone calling, and video conferencing integrated into the application. You could say Bitrix24 is trying to create the Swiss Army Knife of cloud collaboration apps – you can pull out the right tool to do any job. 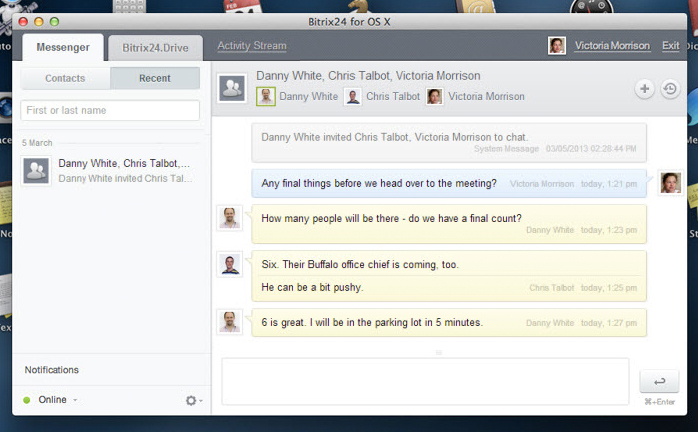 Another feature Bitrix24 offers to set it apart from other cloud storage apps is that it allows you to choose how you work with your documents. So you can choose to create and edit word processing files with Google Docs or Microsoft Office web apps, instead of being forced into one or the other.

Dropbox founder and CEO Drew Houston knew he'd arrived with his cloud storage and syncing service when Apple Inc. was interested in talking about an acquisition. Not interested in selling the firm, he

Harvey Medcalf's Toronto-based startup sounds familiar at first. After hatching an idea in their parents' basements, a group of 20-somethings have formed a team to take on Facebook with a bigger, better, more

Other updates coming to the Bitrix24 service in March include updates to the mobile apps, itemized billing for telephony, call history, and you can choose your own outbound calling number.

The free, entry level option for Bitrix24 offers up to 12 employees sharing 5 GB of storage per month. It doesn’t allow for external users. A standard, USD$99 per month plan allows unlimited employees and unlimited external users to access 50 GB of storage per month. A professional level plan for USD$199 per month bumps the storage level up to 100 GB. Credit for VoIP calling has to be purchased in addition to the plans. Bitrix24 has a special offer where it is free for business schools.

To win users, Bitrix24 will be competing with some appealing price points recently introduced by Google. It offers 15 GB free on Drive, then $1.99 per month gets you 100 GB, and $9.99 for 1 terabyte.

Tablets handy for SMBs, but they're challenging to deploy, survey says