British cyclist Chris Froome defended the yellow jersey and captured his fourth Tour De France championship for Team Sky yesterday. But after 21 grueling stages of the 2017 Tour De France the digital story may be more compelling than the actual race since Froome was the overwhelming favourite at 2 to 1 odds.

CDN Top 100 Solution Provider Dimension Data was tracking all the analytics during the race along with participating in the competition. Lead rider Serge Pauwels of Belgium finished in 19th place for Team Dimension Data more than 39 minutes behind Froome.

The technology team at Dimension Data may have had a tougher challenge that 167 riders who finished the entire Tour. Dimension Data had 27 people in the field for the three-week competition. This team travelled approximately 37,819 KM across four nations to capture data from all 21 stages. On the back end, Dimension Data had 33 people supporting the team on the ground who worked across five continents and in eight cities. The data was captured by GPS tracking devices underneath the saddles of each bike. The GPS tracked speed, position within the peloton, and distances.

Dimension Data built 21 digital workplaces utilizing one big data truck, a mobile client experience centre, a datahouse, five hospitality cars and 13 regional command centres. These centres used collaboration tools from Cisco such as Jabber, WebEx and Yammer. From Microsoft, they used Outlook and Skype for Business. Slack and What Apps were also used.

Over the course of 3,540 KM raced the average speed was 41 KM per hour. There were many long days at this Tour but Stage 12 took the cake with six hour and 27-minute race. There were seven more climbs year compared to 2016 for a total of 53 totaling 307.9 KM of which 31 racers abandoned. And, Col du Galibier at Stage 17 was the highest point of the Tour at a whopping 2,642 metres. 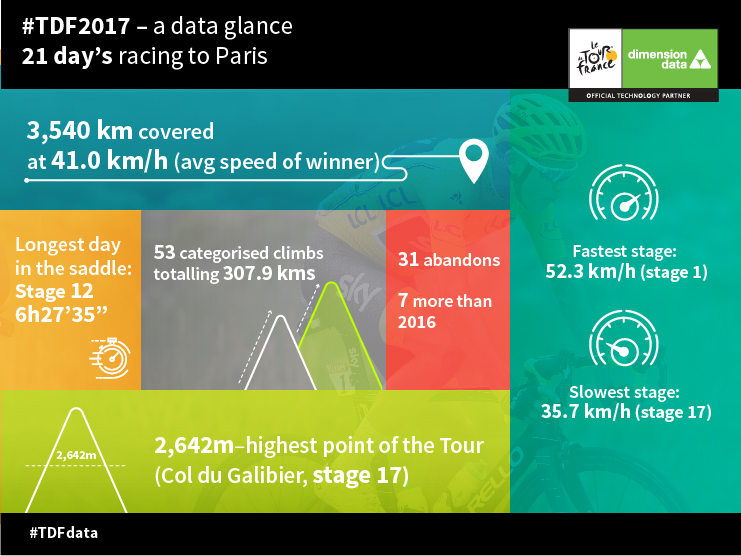 According to Peter Grey, Dimension Data’s Senior Sports Practice leader, machine learning was used along side its advanced data analytics platform and was able to integrate different sets of data. Complex algorithms were programmed into the platform that was able to calculate race possibilities in real-time.

Possibly the most astonishing insight from this data is that the tech team at Dimension Data could predict the top placed finishers with 71.4 per cent rate of accuracy. The team looked at data from six areas: rider form, historical performance, rider profile verses stage type, form of other riders, team composition and team form.  They predicted Froome to win his fourth title, which isn’t a stretch since he is the defending champion and highest paid rider, but the data also figured out that Fabio Aru of Team AST was going to beat Froome and take away the Yellow Jersey on two stages.

The data showed most of the top riders are evenly matched in the mountains, but where Froome shows his stuff is in the time trials. 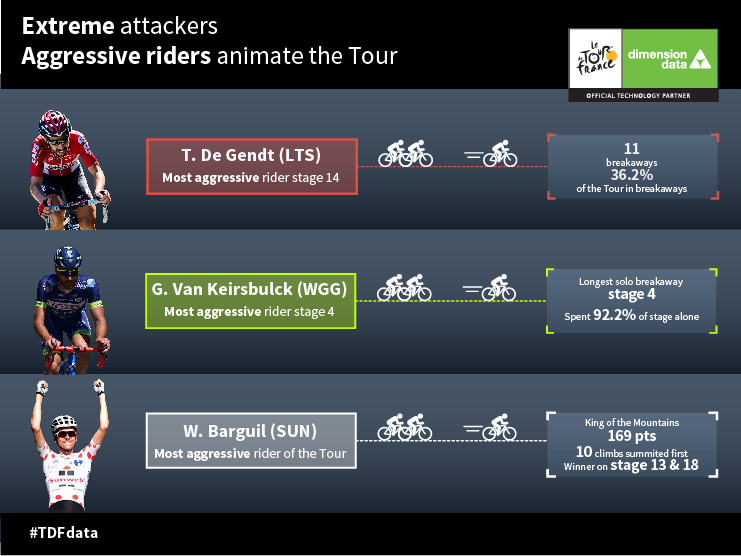 Another interesting insight from all the data captured was the performance of French rider Warren Barguil of Team SunWeb. Barguil managed a Top 10 finish but was also determined to be the most aggressive rider of the entire tour mainly because he could reach the top of 10 climbs and won Stages 13 and 18. Barguil may not have won the coveted Yellow Jersey but he did get the Polka Dot jersey which makes him the King of the Alps.

What was the hardest stage? That had to be Stage 9 with an elevation of 4.600 metres that made 13 competitors say “uncle”. The data that was tracked indicated the 2017 race to have extreme gradients of 15 per cent slopes some of which when for 890 metres. The average speed was 10.7 KM per hour. 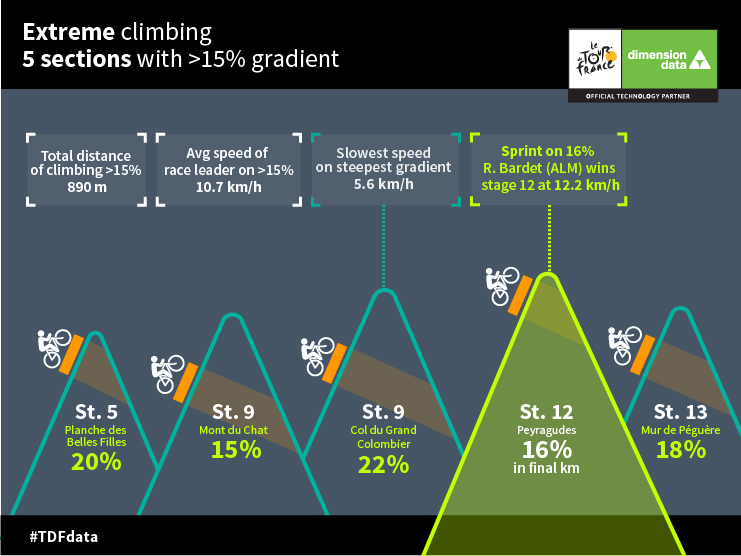 One of the more exciting moments in cycling is when a rider decides to breakaway from the main peloton to chase victory. This year’s Tour De France had a lot of those. But the question is does breakaway produce results. The answer is most of the time it does not.

Benoit Vittek, the data reporter assigned to cover this year’s race, found that while Geraint Thomas’ victory for Team Sky in Dusseldorf was an exciting breakaway the following eight riders who tried the same thing were not so fortunate. Some of these ended up in crashes.

In Dusseldorf Stage 1 of the Tour De France Thomas was averaging 52.3 KM per hour. Then during the chase eight riders crashed and most of the challengers where hitting their top speeds within 400 metres of crashing. One Spanish rider Alejandro Valverde of the Movistar Team hit speeds of 64.6 KM per hour just before crashing. Valverde was badly hurt after hitting a metal barricades and was taken to hospital.