Superheroes might protect you from the evils of the physical world, but according to Intel Security’s recent study, their super powers are useless on the Internet.

Intel Security recently released its third annual list of the Internet’s Most Toxic Superheroes. Aquaman slid into first place with Iron Fist and Wolverine following suit in second and third. Searches were conducted using SiteAdvisor technology, which “tests and rates nearly every trafficked site on the Internet and uses red, yellow and green icons to indicate the website’s risk level.”

Related
McAfee adds to legal chorus: Bieber is dangerous
Share your love, but not your password: McAfee

The end result is a list comprised of the top ten superheroes that are most likely to get you into trouble on the web. The following percentages indicate your chance of landing on a website that has tested positive for online threats such as spyware, adware, spam, phishing, viruses or other malware. 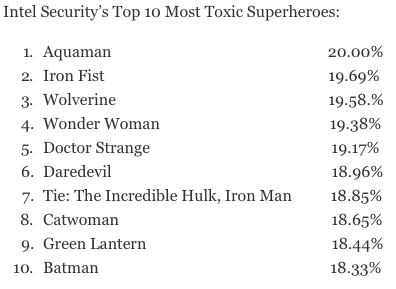 With new movies and franchises emerging all the time, the volume of superhero searches on the Internet is continually increasing. Aquaman is set to star in his own feature film in 2018, and according to this list, searching for him on the Internet leaves you with a 1 in 5 chance of landing on a corrupt site.

“[The goal of the list] is to educate consumers on how to best protect themselves when they’re searching on their smartphones and devices,” said Brenda Moretto, Canadian consumer manager at Intel Security.

Intel wants to offer a representation of the kind of things that could happen when searching, and provide insight into how to protect yourself. After all, we can’t let the Jokers and Magnetos of the world control the Internet. Intel Security has suggested a few precautions you can take to avoid any damage imposed by cybercriminals.

Be suspicious: Be wary of searches that turn up a link to free content or too-good-to-be-true offers.

Be cautious: Cybercriminals set up malicious, fake sites that will include inappropriate content and malware particularly for hot topics.

Read before you click: Look for misspellings or other clues that the link may direct you to.

Protect yourself: Use comprehensive security that is up to date with a safe search tool to identify risky websites in search engine results.

Comic-Con is starting up soon, and Moretto hopes that consumers will remember these precautions when looking up their favorite superhero. To protect yourself further, visit the SiteAdvisor webpage and download security software for free. 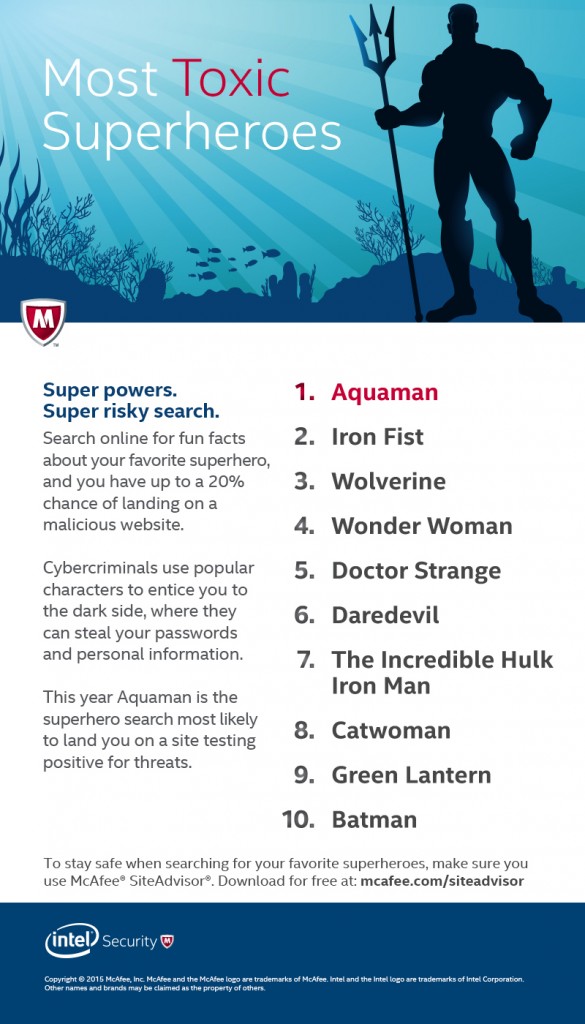 Jackie Atkins
Jackie Atkins is a competitive alpine skier, student and aspiring writer who primarily contributes stories about the intersection between technology and sports to ITBusiness.ca.
Previous articleDell’s vision for a future-ready enterprise
Next articleLinkedIn the social platform of choice for B2B marketers: survey

Think before you selfie – mobile malware might be watching