The ThinkPad X1 Carbon (2014) is Lenovo’s follow-up to what could be considered the first, and also one of the best, true business-class Ultrabook, the original X1 Carbon from 2012. While there is now a lot more choice when it comes to business Ultrabooks, the 2014 version of the X1 Carbon has been improved in a number of areas over its predecessor to try and keep its place on the top step.

The X1 Carbon is still a very thin machine, but the 2014 model but no longer holds the honor of being the thinnest – this year it is beaten by the HP 1040 G1, Dell XPS 13 and Toshiba Z30. Despite that, it does have a wedge shaped profile, so still tapers to an extremely thin 13mm at the front, and it is still the thinnest ThinkPad model. It has a 14-inch display, but Lenovo has impressively managed to squeeze it into a chassis that is similar in dimensions to many 13-inch Ultrabooks. As its name suggests, X1 Carbon is made mainly from carbon fibre and magnesium, making it very light (it starts at under 3 lbs), but also very durable – it passes eight MIL-STD tests. 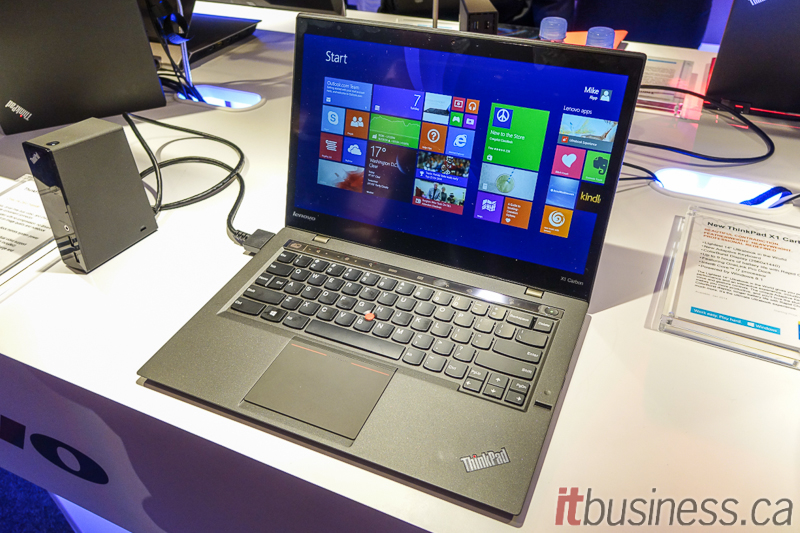 On this year’s model, the backlit keyboard is quite different, with island style keys in a new layout. Unfortunately, the keyboard on the 2014 X1 does not quite reach the standards set by the T440s since the keys are stiffer and have less travel. Like the T440s, Lenovo has done away with the touchpad’s physical mouse buttons, something we think is a bit of a step back, even if the new touchpad is aesthetically more pleasing. The X1 Carbon still has our preferred method of ThinkPad cursor control, the classic red ThinkPad TrackPoint.

One of the most noticeable new features of the 2014 X1 Carbon model is the new ‘Adaptive Row’ that replaces the f-keys with capacitive touch buttons that change to show different functions, depending on what application you are using. Examples would be volume and brightness control when watching a video, or microphone and camera controls when using Skype. You can, of course, manually cycle through the modes, including having the row act as traditional function keys.

The other big new feature is the super high-resolution Quad HD IPS display (2560 x 1440), which is the highest resolution of any machine in this list. The screen is gorgeous – it is super-crisp, bright, and has great viewing angles. Moreover, like the T440s, even the touchscreen model has an anti-glare coating on the screen. One disadvantage though of such a high DPI screen is that some Windows applications will not scale properly on it. 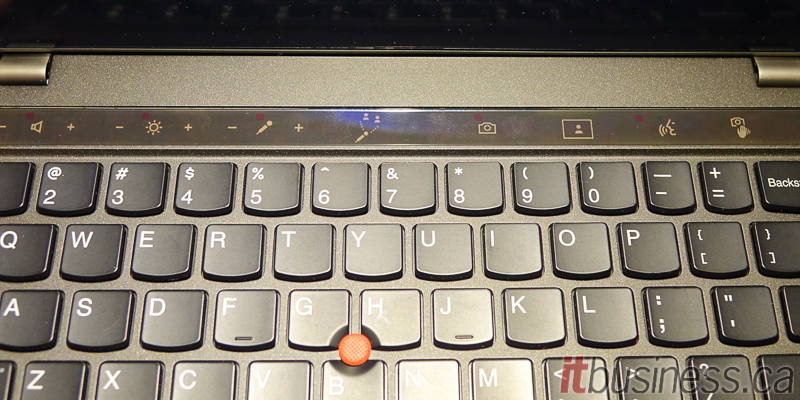 Just like the first X1 Carbon, in order to get it as thin as possible there had to be some compromises in how many ports it has – the X1 has two USB 3.0 ports, a full-sized HDMI and mini DisplayPort. Ethernet connectivity is provided by a dongle. We think Lenovo should have squeezed in a more useful VGA port instead of the HDMI, and for some reason, even though the 2012 model had one, there is no SD card reader.

This year’s X1 Carbon can connect to a docking station, with a Lenovo ‘OneLink’ port of the side. However, the Lenovo OneLink Pro Dock that hooks up to it is not one that the notebook sits on like the docks for the other notebooks in this list. It is an external box (shown off to the side in the picture above) that provides four more USB 3.0 ports, two USB 2.0, Ethernet, DisplayPort and DVI.

Like the other very thin machines in this list, the X1 Carbon’s battery is sadly not removable, and its life is only 7 hours, which is decent, but not great. Also, like last year’s model, neither the RAM or SSD are easily upgradeable – everything is disappointingly sealed up.