The 2010 version MacBook Air could be considered to be the first Ultrabook since it is the notebook that inspired Intel to create the Ultrabook category for Windows notebooks. While calling the MacBook Air a business Ultrabook is perhaps stretching it a bit, it is true to say that the Air is used by many business professionals, so we are going to include it in this list, since it is great choice for certain users.

As a Mac, it, of course, comes with OS X, which might not be the most suitable OS to work on, especially if your organization’s standard (like most) is Windows. However, if you need to run Windows apps on a Mac, there are multiple ways to do so, including installing Windows on the Air using Boot Camp or running it virtualized using Parallels.You still have to buy, or your company has to provide, a Windows license to do this.

Despite these software limitations, the Air is still a great tool, especially for creative professionals, who more than likely already work in OS X environments. Also, if you primarily just use Microsoft Office at work, and don’t want to install Windows on the Air, you can still get all your work done with Office for Mac. 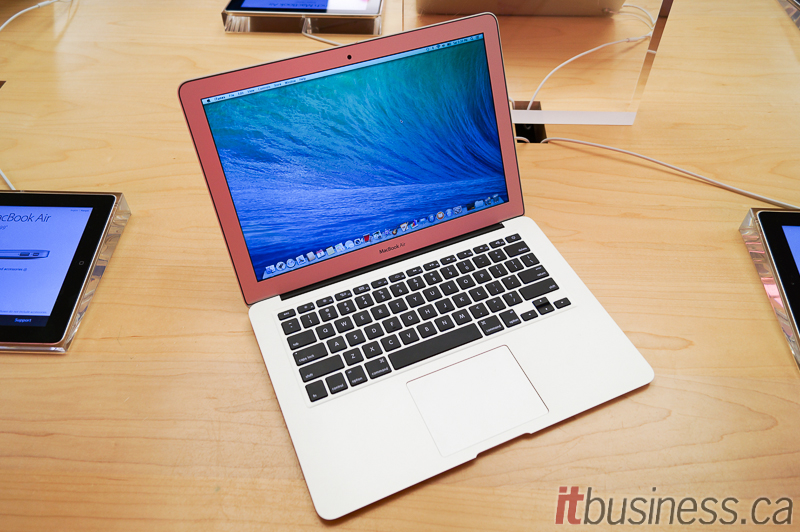 We included the Air in our Top 10 Business Ultrabooks list last year, and this year’s model has not changed much, apart from the upgrade to Haswell CPU’s.The 2014 model has the same wedge-shaped aluminium uni-body chassis, an iconic design that has inspired many Windows Ultrabooks. As its name suggests, it is very thin, measuring from 17 mm – 3 mm thick, and very light at 1.35 kg (2.96 lb). However, despite the premium materials and construction, it is not as durable as some of the other notebooks in this list – it has not passed any MIL-STD testing and its keyboard is not spill-proof.

The Air is available with either a Core-i5 or a Core-i7 Haswell CPU, and unlike most of the Ultrabooks here, it does have Intel HD 5000 integrated graphics, which is much better than the HD 4440 GPU found in most of the other machines in this list. Its 13.3? TN screen has a better than the average resolution of 1440 x 900, and has decent viewing angles, but it is still not an IPS display. There are other Ultrabooks with much better higher resolution screens in this round-up. This is the same screen Apple has been using for years in the Air, and it is time for an upgrade. It is also glossy, which is a big minus for business users. The well laid out backlit keyboard is excellent, with good, springy, decent-sized keys. The precise glass touchpad is one of the best of any laptop, with a smooth surface that supports multi-touch gestures.

The fact that the MacBook Air is first and foremost a consumer machine means it does not have any of the hardware features one would expect from a true business Ultrabook. Neither the RAM nor the SSD is user upgradable, and the battery is not removable. Also, there is no docking station connection, and it is not available with vPro CPU’s for Enterprise remote management. It also has a limited number of ports, with just two USB 3.0 ports, an SD Card reader and Thunderbolt (for video out and high-speed data transfer). If you want to connect the Air to VGA, HDMI or Ethernet, you have to buy expensive Apple adapters separately. 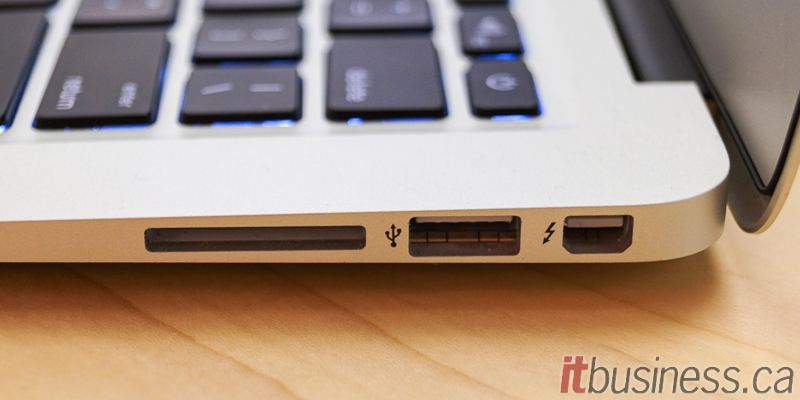 Despite those negative, one area that the Air has always been exceptional in is battery-life – last year’s model ran for about 6 hours, which was good for its time, and this year’s model doubles that number, running an unbelievable 12 hours with regular use. Of course, this is partially down to the fact that OS X is better at managing power consumption than Windows. When running Windows, expect to see the battery-life drop.

As for pricing, the Air is comparably priced to most of the Ultrabooks in this list, but isn’t as good value for money because it lacks many business-grade features, and only has a 1-year warranty out-of-the-box.