Which gender reigns supreme in the world of online professional networking? According to new data from LinkedIn, it’s the men-both in the United States and across the globe.

The reason: According to Nicole Williams, LinkedIn’s connection director and author of Girl on Top, women tend to equate networking with ” schmoozing” or handing out business cards. “In reality,” she says, “[networking] is about building relationships before you actually need them.”

A Canadian business and professional networking coach, however, says she is not convinced the findings provide an accurate picture.
“I’ll be the first to challenge that assumption. I believe there are many women who are just as good if not better than many at networking,” said Donna Messer, a networking “guru” and principal of ConnectUS Communications Canada, an Oakville, Ont-based coaching and mentoring service firm.

Messer is an avid user of social networking tools and encourages clients to create their own LinkedIn accounts, but she thinks the most recent LinkedIn announcement illustrates “differences in styles of using LinkedIn” rather than a weakness or strength.

Men might tend to view online networking as a hunting expedition and concentrate on accumulating the most online connections, Messer said.”Women tend to equate networking with face-to-face meetings, so they probably do of that before moving on to another online contact,” she said. 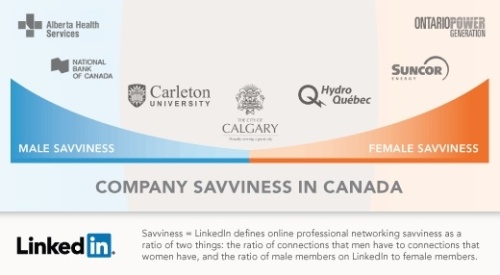 To declare a winner, LinkedIn developed an “online professional networking savviness ranking,” a formula that examines the ratio of connections that men have versus those of women, and the ratio of male members on LinkedIn to female members.

LinkedIn also sliced the data by industry, surfacing some interesting tidbits. In female-dominant industries, such as cosmetics for example, it’s the men who, once again, beat out the women in online professional networking.
According to LinkedIn, they’re the ones sending out more invitations to connect and they have larger networks.

Other top industries in which men are savvier online professional networkers include medical practice; hospital and healthcare; law enforcement; and capital markets.

On the flip side, in male-dominant industries such as tobacco and ranching, female professionals are savvier networkers than their male counterparts. Other industries in which females dominate networking include alternative dispute resolution; alternative medicine; and international trade and development.

LinkedIn data analysts say this could be because women have to work harder to break into male-dominated industries, and vice versa.

A few areas in which men and women were equally as savvy: market research; media production; dairy; individual and family services; and paper and forest products.

When asked for actual figures generated by survey, Danielle Restivo, manager of corporate communication for LinkedIn Canada said she had none and that the survey actually wanted to focus more on the industries where men and women were taking part in online networking.

The top five industries where Canadian women were most active in online networking were:

The top five industries where Canadian men were most active in online networking were:

Women excelling in networking in the shipbuilding industry and men doing the same in the textile industry might raise some eyebrows, but Restivo said that reaction could more a reflection of pre-conceived notions about the sexes.

“There could be many factors involved such as the social networking policies of the companies or positions of the people covered by the survey,” she said.

The actual nature of the industry also plays a role restive said. For instance, while the textiles are associated with women, the industry itself employs a sizable number of men.

Messer said for many firms and professionals the value of the survey is on how they can use it to improve the business and networking skills.

“Remember, in networking it’s not so much what you know as who you know,” said Messer.

For example, individuals can use the survey to help them determine which areas they should concentrate their professional networking on.

Would be online networkers should also avoid relying on a single tool for their networking. “Use all the tools available and appropriate for your purposes,” she said.

She finds Facebook more of a “party place” ideal for more social networking and LinkedIn geared to professional connections and Tweeter good for “putting the message out.”

Here’s what you can do to increase your “savviness ranking,” according to LinkedIn:

1. Prepare before events. Before you attend a conference or networking event, review where other attendants work, what position they hold, their tenure at the company and if you have connections in common. Also, be sure your own LinkedIn profile is complete with your work history, education and skills so others can learn about you as well.

2. Move beyond your networking comfort zone. While LinkedIn recommends that your network be made up of at least 50 connections that you know, it also recommends actively seeking new ones, such as by participating in LinkedIn Groups. Seek out groups based on what you’re passionate about so you can meet professionals who share your interests.

3. Give kudos to others. LinkedIn cautions that networking should not be solely about what you can get from others. Instead, treat your stream of connections’ updates as your professional dashboard. If you see that a connection just got promoted or landed a new client, send them a message to congratulate them to start some dialogue.

Nestor Arellano is a Senior Writer at ITBusiness.ca. Follow him on Twitter, read his blogs on ITBusiness.ca Blogs , connect with him on LinkedIn and join the ITBusiness.ca Facebook Page.