Banks can’t do mobile payments on their own: CenturyLink

As Silicon Valley-based competitors including Apple, Google, and Samsung are looking to bully them out of the mobile payments business, many Canadian banking executives are looking for help in standing up to these tech giants.

Almost half of C-suite level executives at financial services companies say they don’t think they have the IT infrastructure, systems, and processes in place to meet present consumer demand for mobile services, let alone where it will be in the future. That’s what CenturyLink’s Canadian Financial Services Survey found when, working with IDC Canada, it conducted a survey of 50 execs by phone between May 1-13. The numbers are reason to worry, says Roji Oommen, managing director of financial services at CenturyLink.

“The mobile banking boom is driving consumer behaviour and it’s hard to deliver a road map for how to meet customer expectations,” he says. “It requires a tremendous amount of flexibility of your infrastructure.”

The demand for mobile banking has been growing in Canada. In a country where web banking is near universal adoption, the Canadian Banking Association reports that 26 per cent of Canadians use mobile banking today. That’s up from just five per cent in 2010. Responding to the trend, all major banks now offer a mobile app and are expanding the services available to them. For example, the capability to deposit a cheque by taking a photo of it in the app has become a common feature in several banking apps over the past year.

“There’s a huge difference between doing it and doing it well,” he says. “Executives see a mismatch between the mobile banking experience and what they have the capability to deliver in-house.”

Forty per cent of execs said they don’t have the IT infrastructure in place to meet customer expectations for core banking services. Almost 70 per cent said their infrastructure for digital channels at least needs improvement. Banking execs are the most uncertain when it comes to providing a good mobile payments experience, with almost half saying they don’t feel they’re ready for it, and another 20 per cent saying it needs improvement. 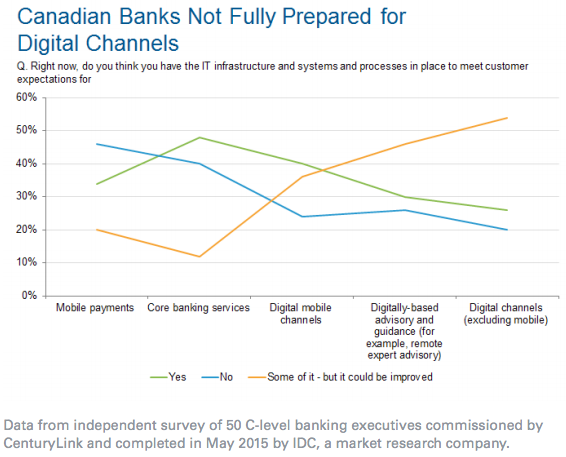 Part of that feeling of inadequacy may come from the challenges involved in supporting mobile service delivery, Oommen says. There’s a fragmented user market on Android, iOS, BlackBerry, and Windows Phone to start with. On top of that, people are accessing their banking accounts over public networks at coffee shops and the like.

“They want to be able to access these services when it’s most convenient, and even when it’s sometimes risky,” he says.

So how will banks solve this problem? Outsourcing is at least part of the answer. CenturyLink, itself a managed service provider targeting the financial industry, says that many aspects of IT infrastructure have become commoditized and banks should offload those in order to focus on core business competencies.

In the survey, many execs said they were already outsourcing for many areas. The most popular was cyber security (80 per cent), followed by infrastructure for mobile applications and services (62 per cent), and public cloud infrastructure (40 per cent.)

When asked what would make them outsource more, 70 per cent said customer demand for new mobile services or applications.

Even working with third parties like Apple Pay to facilitate mobile payments shouldn’t be ruled out, Oommen says. While banks in the U.S. have made a deal with Apple to facilitate its payments platform, no such announcements have been made for Canada.

“Just because you work with someone doesn’t mean you can’t compete with them too,” he says. “The idea that Apple is going to open up chequing or savings accounts doesn’t really make a lot of sense.”

To improve upon IT infrastructure for mobile services, banks should ensure a close working relationship between the CIO and the CEO, the CenturyLink report concludes.