A new survey of more than 250 U.S. marketing leaders by Beaverton, Oregon-based SaaS provider Act-On Software has discovered that despite the industry hype for demand generation, 37 per cent of marketers are still spending less than 10 per cent of their time on it — and that more surprisingly, those who spent less time on it were more likely to be among the top performers whose companies met or exceeded their revenue expectations.

The other key takeaways from Act-On’s survey, which the company released today, were that the most successful companies were more likely to invest equally across the top three marketing disciplines — brand, demand and customer — and that 69 per cent of respondents were neglecting at least one. 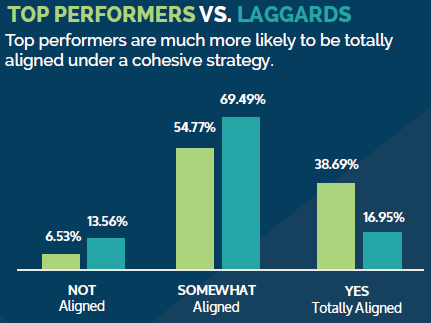 “Despite recent media hype, the role of the CMO is not to be (the) demand gen-centric leader, but instead to be the marketing ‘general manager’ and to facilitate success across all three functions of the marketing department,” the company wrote in its study report. “Successful B2B marketers understand… that an effective marketing strategy requires more than just driving demand for sales, it must also deliver a great customer experience from end-to-end.”

As for which disciplines were more likely to be ignored or emphasized over others, Act-On found that brand, demand generation, and customer expansion were roughly equally likely to be neglected by marketing teams, with around 30 per cent contributing 10 per cent or less of their staff time to brand marketing, nearly 37 per cent avoiding demand generation, and around 35 per cent investing poorly in customer expansion.

The cost for doing so was less evenly distributed, however: so-called “laggards” – marketers from companies which fell short of revenue expectations – were more likely to neglect brand or customer marketing, with 37 per cent of laggards dedicating 10 per cent or less of their time to the former and 42 per cent investing poorly in the latter.

And though 30 per cent of laggards invested less than 10 per cent of their time on demand generation, a higher percentage – around 38 per cent – of top performers did.

Meanwhile, in addition to being more likely to dedicate a significant portion of their time to brand marketing, top performers were more likely to allocate a greater percentage of their budgets to the discipline as well.

“Over the course of a lead’s lifetime they might come into contact with your sales, marketing, and customer success departments,” the report’s authors wrote. “However, from their point of view, they are interacting with one company, not multiple departments.”

Consequently, they wrote, the marketing leaders who meet or exceed their revenue goals are going to be the ones who understand that all three disciplines need to function symbiotically, and allocate their department’s time and resources accordingly.

Eric Emin Wood
Former editor of ITBusiness.ca turned consultant with public relations firm Porter Novelli. When not writing for the tech industry enjoys photography, movies, travelling, the Oxford comma, and will talk your ear off about animation if you give him an opening.
Previous article
Microsoft officially ends support for SQL Server 2005
Next article
IBM announces new video streaming software, partnership with CBC