Babylon VR Wants to Bring DIY Virtual Reality to Everyone 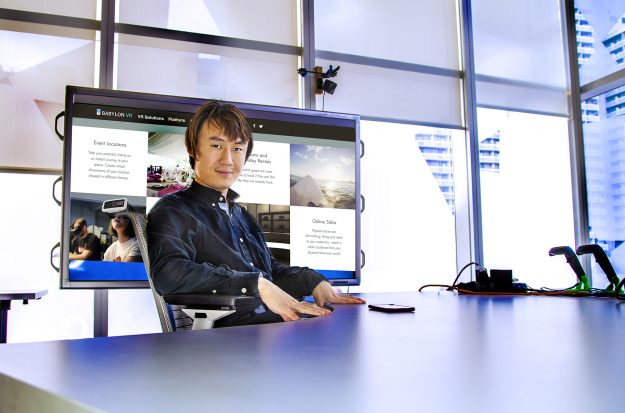 While the Markham startup has been working with clients to help them create VR experiences, Babylon VR hopes to launch software this year to allow anyone to create their own VR and augmented-reality experiences.

Imagine a drag-and-drop editing tool you could access from your PC or mobile device, giving you the ability to edit virtual-reality footage into a clip or film. You don’t need to hire any VR expert, but instead spend a few hours reading the software instructions and trying out its many features.

That’s the vision for Babylon VR, helmed by co-founder and CEO Jack Liu. “One of the factors holding back the VR industry is the lack of quality content, because the barrier to entry is perceived to be high,” he says in an interview. “Without coding experience, someone can make their own VR footage, much like how WordPress made creating websites easier.”

Conceivably, the editor would be able to convert regular film footage, meaning you wouldn’t need to shell out for pricey VR cameras.

While that tool is still under development, Liu’s many clients since the company began four years ago are often requesting “VR and AR [augmented reality] experiences about their product or service,” Liu says. For example, real-estate firms may want Babylon VR to create a VR-based walk-through of a listed property.

Other clients include hotels and museums, both of whom benefit from 360-degree viewings of their unique rooms and suites.

Babylon VR can work with photos or video, so with the former the team can stitch together multiple photos to create a VR-like experience.

Liu recognizes the untapped potential for VR, which is evolving beyond the specialized shorts and film-festival add-ons most common in the West. In fact, the VR industry was valued at approximately $2.02 billion US in 2016 and is expected to reach $26.89 billion by 2022, according to data from May 2018.

While VR is in the crosshairs for Babylon VR, the tech’s lesser-known cousin AR is fast becoming a hot segment of their business, Liu says. “Our current focus on the AR side is architecture visualization, where the user can scan a piece of a floor plan and showcase the interior design in 3D,” he adds.

Getting to where they want to go is still a challenge, Liu says, and it often comes down to funding. “Since this is still a new technology in the market, it lacks the market metrics that investors often look for,” he says. “As a result, it’s a high-risk investment to many investors here in Canada. While we are able to make enough revenue to sustain ourselves, the lack of funding prevents us from taking on opportunities to grow, such as creating marketing campaigns.”

Babylon VR worked with the Parkdale Centre for Innovation last year to beta-test several features and also gain some marketing and UX design tips. In exchange, Liu’s team shot a VR promo of the Centre’s work-sharing space in order to better market what this hub offers to Torontonians. “The Centre readlly helped us make this product ready for consumers,” Liu says.

When Liu considers who his entrepreneurial mentor might be, he replies. “I’d say Elon Musk…The reason is, his motivation for creating a product goes beyond just profit. His focus is to solve some of our biggest problems, such as sustainable energy, space exploration and AI safety, which further the human species as a whole. Not only that, he has the courage to go against the odds.”

As forward-thinking as Babylon VR’s upcoming VR software may be, Liu has even bigger plans for embedding VR deeper into our lives. “Imagine a VR-enabled Internet,” he gushes. “So instead of going into a regular website, you can actually immerse yourself in that site in VR. So if you went into Amazon, say, you would be walking into a shopping centre with all these stores around you. We’ve already seen this in gaming but why not everywhere else?