Axe falls at RIM as “hundreds” laid off in Waterloo

The axe is falling at Research in Motion.

Rumors that jobs will be cut at the Waterloo, Ont. firm are now areality.  At least one RIM employee in that city tweetedyesterday that “hundreds” of people were let go there onTuesday,according to reports in TechVibes and other media.

RIM officials have finally confirmed jobs are now being cut butdeclined to give exact numbers. 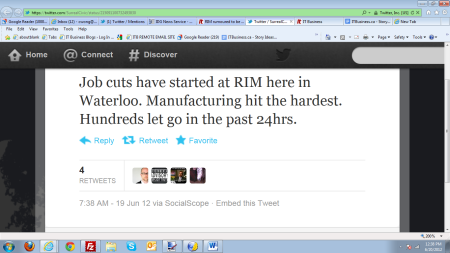 Waterloo, Ont.-based RIM employeeMartin Chmiel tweeted Tuesday that “hundreds” had been laid off there.

Related Story | RIM rumored to be cutting over 2,000 jobs

“RIM has reduced some positions as part of this program and maycontinue to do so as the company methodically works through a review ofthe business,” RIM spokesman Nick Manning said in emailed statementreported today by the Financial Post.

Industry insiders have estimated that up to 6,000 of RIM’s 16,000global jobs could be on the chopping block as the company struggles torebrand itself under new CEO Thorsten Heins and launchits newBlackBerry 10 operating system.

In May, RIM said it has hired JPMorgan Securities LLC and RBC CapitalMarkets to perform a strategic review of its operations.The companyposted a net loss of US$125 million for the fourth quarter which endedMarch 3.