A Toronto-based digital studio is putting flesh on the bones of dinosaurs and bringing the prehistoric beasts to life at the Royal Ontario Museum (ROM) for a public display opening June 23.

No, this isn’t “Jurassic Park” come to life. It’s an augmented reality app that’s been loaded onto iPads mounted in the displays at a new exhibit at the ROM titled Ultimate Dinosaurs Giants from Gondwana. At a media preview on Wednesday, early visitors peered at giant fossil casts through the lens of an iPad camera and saw them transformed into life-like reptiles. The dinosaurs even look a little bit hungry, like they might suddenly turn those giant teeth towards you and take a bite.

“The iPad is essentially a reverse X-ray machine,” says David Evans, palaeontology curator at the ROM, explaining the exhibit. “So you can imagine what that dinosaur would look like when it was alive.”

In addition to being used in the museum exhibit, the iOS app will also be bringing dinosaurs to life on the streets of Toronto. Those with an iPhone or iPad can point their device at a bus shelter ad for Ultimate Dinosaurs to see a Giganotosaurus (like a T-Rex, only larger) rip through the ad and flash its pointed teeth. 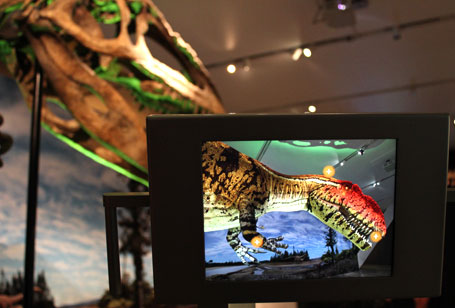 Meld Media is the software developer behind the app. It wasn’t the digital agency’s first time creating an augmented reality experience, says Ken Reddick, the creative director, but it was the first time doing so on a mobile device. Developing on iOS seemed like the best choice.

“It allowed us to create for a wide variety of devices on a singular platform of development,” he says. “The later generation iPhone and iOS devices are quite fast… giving us a rich development environment.”

The app is based on the String augmented reality software development kit for iOS. String recognizes framed images and is able to map them in 3D space. That allows developers to overlay graphics on top of the camera view and give them the appearance of existing in the real world.

“Visitors will be able to see the dinosaurs and how they moved, how they looked,” Reddick says. “We can see what their textures and skin looked like.”

Meld Media would like to take its experience with the ROM and apply it to projects with other educational institutions, he adds.

The ROM is using third-generation iPads in the exhibit. In addition to providing the augmented reality experience, they also serve up information for visitors to read about the dinosaurs.

Ultimate Dinosaurs exhibits dinosaurs that you’re probably not familiar with. It focuses on  species of dinosaurs that evolved geographically separate from other prehistoric reptiles. The creatures roamed modern-day Africa, Madagascar, and South America. The dinosaurs are unusual, and in many cases gigantic.

The exhibit is on for a limited amount of time at the ROM. Watch ITBusiness.ca for an upcoming video feature on the exhibit.

Brian Jacksonhttp://www.itbusiness.ca
Editorial director of IT World Canada. Covering technology as it applies to business users. Multiple COPA award winner and now judge. Paddles a canoe as much as possible.
Previous article
Axe falls at RIM as “hundreds” laid off in Waterloo
Next article
A third of all malware undetected by virtualized security networks