Asetek Inc., this week revived the promise of bringing liquid cooling to laptops, which the company is pitching as an alternative to noisy fans.

Air fans cool most of laptops today, but the heat they generate has been increasing as computers become faster. Fans are also spinning faster to dissipate heat, making laptops noisier. Asetek said the new liquid-cooling technology is a more efficient system than fans, and will allow PC makers to use faster processors while making laptops quieter. 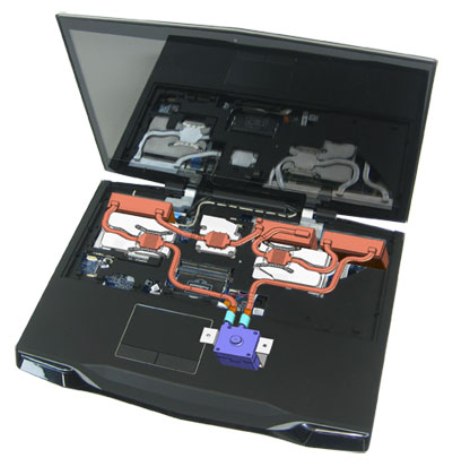 The company’s liquid-cooling system is most relevant to gaming laptops, which can generate excess heat through strain on the GPUs (graphics processing units) and overclocked CPUs, Asetek said.

“A typical way to fix it is to make laptops bigger and throw [in] more fans. But that’s a contrary way to why people want laptops,” McCarron said.

Under Asetek’s approach, all the components are connected through one liquid-cooling system that extracts heat as chips are stressed. Sharing cooling systems across components like CPUs and GPUs is a more efficient way to dissipate heat, Asetek said. Usually CPUs and GPUs have their own heat sinks and do not share cooling resources.

In a video demonstration, the company showed Dell’s Alienware M18X laptop with an Intel Core 2920XM processor running at 3.5GHz and an Advanced Micro Devices Radeon graphics card. The company was able to overclock the CPU to 4.4Ghz from 3.5GHz, and the GPU to 800MHz from 680Mhz. The liquid-cooling system connected all cooling systems and was able to dissipate the excess heat generated by the strained components without baking the laptop.

Current laptop designs mostly place the CPU and GPU on opposite edges of a motherboard from where the heat can be easily flushed through vents on the sides, McCarron said. Placing the chips next to each other puts excessive heat on each component. But with liquid cooling, motherboard designers have the flexibility to put the CPU and GPU anywhere, which could result in smaller laptop designs.

But liquid cooling is expensive and limited to a specific audience of enthusiasts, while air-cooling technology is cheaper and easier to implement, McCarron said. Liquid cooling also draws more power, which partly defeats the purpose of buying a laptop.

“The [liquid-cooling] thermal solution does nothing about fixing the battery,” McCarron said.

Asetek is targeting the technology at high-performance laptops, desktops, workstations and all-in-ones. This is not the first time liquid cooling is being offered in laptops.

Hitachi introduced a liquid-cooled laptop in 2002 that used a water tank to dissipate heat. The water-based system absorbed heat by running through a tube placed over chips. The laptop, called Flora, was priced at US$2,941 and had a mobile Intel Pentium 4 processor with a clock speed of 1.8GHz, 128MB of RAM, a 20GB hard drive and a 15-inch LCD screen.

Enthusiast PC makers also offer liquid cooling with the desktop gaming systems, and IBM has implemented liquid cooling at the Aquasar water-cooled supercomputer which is being used at the Swiss Federal Institute of Technology in Zurich.