With its sleek lines, thoughtful and minimalist design, large and beautiful screen, robust operating system, polished iLife suite of apps, and updated hardware, the new iMac is a great value for anyone looking for a desktop computer.

Earlier this month, Apple completed a round of hardware updates to its Mac Pro, iMac and Mac mini lines, offering up modest speed boosts, some pricing tweaks and — most importantly — the Nvidia 9400M chipset for graphics.

Best of all for iMac fans, Apple also made the 24-in. version of its popular all-in-one configuration a more tempting proposition by making it less expensive.

Smart move in the middle of a recession.

For those who’ve waited almost a year for an iMac update, the latest round of changes has made all of Apple’s computers Snow Leopard-worthy, putting in place hardware that can best handle Mac OS X 10.6, due out later this year.

With the Mac mini taking up the low-end of the Mac market and the Mac Pro on the pricey side of things, Apple’s flagship iMac line sits in the middle. 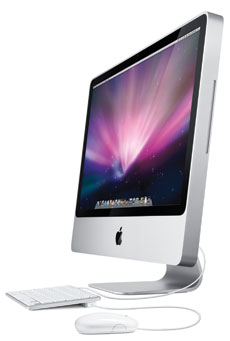 I’m focused on the least-expensive 24-in. version, which now sells for $1,799. That extra screen real estate should be a real draw for buyers looking to get the most for the least.

Apple sent over for review the basic 24-in. iMac, though there’s not much basic about this particular model. It runs on the same 2.66GHz Core 2 Duo processor used by the previous iMac at this price point.

(It’s also the same chip that’s in the entry-level 20-in. model.) But hard drive space has been doubled to 640GB; memory has gone from 2GB of 800MHz DDR2 RAM to 4 gigs of 1066MHz DDR3 RAM; and the graphics subsystem gets the new integrated Nvidia 9400M. Like other recent Apple products, it has no FireWire 400 port, relying instead on FireWire 800 for peripheral connections and for use in Target Disk Mode.

All new iMacs now ship with the Mini DisplayPort to which you can connect one of Apple’s 30-in. displays (with an adapter), a first for the iMac lineup; gigabit Ethernet; and four USB ports, which according to Apple officials operate on two controllers.

Having more than one controller is important for avoiding low-power warnings, given how dependent many people have become on USB to connect all their peripherals to the computer.

The iMac also has built-in stereo speakers, a headphone jack and an audio line-in jack.

Wireless connectivity includes Bluetooth 2.1+EDR and 802.11n Wi-Fi networking. All four iMacs ship with a SuperDrive, meaning they can read and write CDs and DVDs.

There’s still no sign of a Blu-ray drive, though, which would seem a natural addition to the iMac line given its stunning hi-def LCD screen. Screen resolution on the 24-in. model remains 1920-by-1200 pixels, with the smaller 20-in. version offering 1680-by-1050 pixels.

Of note, too, is the noise Apple’s been making lately about how green its products are. This machine gets an Energy Star 5.0 rating, marking the first time that the iMac — all of them, actually — has gotten an EPA gold rating.

Given the list of features included across the iMac line, there’s not much more you need. If you have more money to spend, the two pricier models offer the same refined aluminum-and-glass look, with faster processors and more video RAM.

They cost $2,099 and $2,599, with the top model offering a 3.06GHz Core 2 Duo chip, 512MB of video RAM and 1TB of storage space. Solid-state disk drives (SSDs) aren’t yet an option. That’s not surprising, given the higher costs for SSDs and Apple’s desire to keep prices reasonable.

Specs never tell the full story about a computer; time spent using one is essential. And while I’ve been working with this 24-in. for only about a week, I’ve concluded that what Apple has produced here is a solid system with a beautiful screen at a price point that makes this an attractive buy. Given the recent dip in sales of its desktop models, Apple is no doubt hoping the update will spur new sales.

Setup and the out-of-the-box experience is as simple as ever, especially when you’re already using Apple’s services or upgrading from an older Mac.

For instance, my preferences and settings for all of my applications, my passwords, my contacts, my calendars, my e-mail accounts, my notes, and my bookmarks were all automatically transferred once I entered my MobileMe e-mail and password in Mac OS X’s MobileMe preference pane.

For those who aren’t MobileMe customers, the Mac’s setup assistant helps transfer files and settings from previous Macs or Time Machine backups. With iMac customization automatically done for me, I was able to dive right into using the iMac.

The current iMac is a sight to behold, as were its recent predecessors. Even though the basic design hasn’t changed since the move to aluminum in 2007, it still manages to look modern and fresh.

The iMac may have been the biggest influence for last year’s “unibody” laptop makeover, as if someone at Apple looked at the iMac’s thin aluminum casing, its darkly framed glossy display, and said, “This. We need a portable version of this.”

Obviously, the big, glossy screen dominates the design, with an emphasis on glossy. These screens, while producing vibrant colors and deep blacks, reflect back a lot of light, almost like a mirror under normal conditions.

To some people, Apple’s decision to settle on glossy screens as the standard has been controversial, because the screen reflections can be distracting and annoying.

Personally, I don’t mind glossy screens. In fact, I prefer them. Unlike some vocal Apple fans, I don’t think Apple’s move to glossy was a devious plot against the old matte finish; it was no doubt meant to streamline production and follow the market.

Desktop keyboards, by definition, aren’t going anywhere, so portability is hardly a factor, especially given the wired nature of the keyboard. On the positive side, typing on the keyboard feels nice, as the throw doesn’t seem to be as short and abrupt as the wireless keyboards I’ve tried.

You can still order a keyboard with the number keys with your iMac, for no extra cost. But I can’t shake the feeling that Apple’s looking to weather the current economic storm with annoying little cutbacks: a FireWire port gone here, a redesigned keyboard there, no Apple remote in the box.

And the remote, should be included with the iMac, as it makes such a perfect machine for watching videos, and DVDs — especially in places where screen size is important, yet space is at a premium, like a dorm room.

I’m certainly happy that the iMac still has Target Disk Mode capability, meaning you can enable it to act as a big FireWire hard drive by holding down the T key at startup. This has always been seen as a major differentiating feature between a PC and a Mac, and it’s incredibly handy as a troubleshooting tool.

With an eye on performance, I ran the iMac through a series of video conversion tests to see how it would do.

With the 24-in. screen, the iMac could be exactly what a budget-conscious videographer or designer might choose. I stacked it up against another recent Apple offering, my 15-in. 2.53GHz MacBook Pro, a favorite for mobile video editors and designers.

And exporting a fairly complex 50-minute video produced in iMovie 09 took about two hours and 15 minutes on the iMac, 15 minutes longer using the MacBook Pro. (The iMovie file was exported using Apple’s “Large” settings, resulting in an h.264 m4v file with the resolution of 960×540 pixels.)

I also ran a quick benchmarking test using Xbench. It returned an overall score of 141, the same as my own MacBook Pro. For comparison purposes, my laptop has a faster 7,200-rpm hard drive and both the integrated Nividia 9400M graphics chip and the 9600GT processor with 512MB of discrete video memory.

As noted earlier, the biggest under-the-hood change with this iMac release is the inclusion of the Nvidia graphics chips. That may not seem like much at first glance, but it actually completes the transition of Apple’s computer lineup to full Snow Leopard compatibility.

Snow Leopard is the code name for Mac OS X 10.6, which is due out by mid-year. The next generation of Apple’s rock-solid OS doesn’t offer lots of whiz-bang new interface features, but instead streamlines and adds to the foundation laid by Mac OS X 10.5.

All Macs running on Core 2 Duo processors (or any newer chips) will be able to utilize Snow Leopard’s 64-bit architecture, but it wasn’t until this round of updates that all desktops could take advantage of OpenCL and Grand Central, two major features in Snow Leopard.

Briefly, OpenCL allows software developers to tap into a computer’s graphics processor for general processing, putting the GPU to work during times when it normally sits idle. (And who doesn’t want more processor firepower available if needed?)

Grand Central is a new set of multi-core optimized APIs built into Snow Leopard, allowing developers the ability to allocate tasks across all available processors and cores easily and much more efficiently.

If those technologies don’t sound exciting, consider this: while a Core 2 Duo chip features two 64-bit cores, in Snow Leopard, those cores will play in concert with the processing cores of the Nvidia 9400M GPUs, of which there are 16! (The Nvidia GeForce GT 130 that ships in higher-end models has 48 processing cores, by the way.)

The current crop of iMacs, continues the same design theme rolled out in 2007.
While that doesn’t mean your Mac will be 16 times faster with the advent of Snow Leopard, developers who take advantage of the technology in their apps can certainly produce notable performance increases — even on the same hardware.

I’ve seen a couple of updated application demos (under a non-disclosure agreement, so I can’t hash out details), and I was very impressed by what I saw. The performance increases are very real.

With these latest hardware updates, Apple has increased the overall value of its entire iMac lineup. Since their performance will improve with the next release of Mac OS X, Apple is actually extending the real-world life span of these machines.

The latest models are at least as fast as the previous generation, and they stand to gain yet another boost in speed with the release of Snow Leopard.

The bottom line is this: With its sleek lines, thoughtful and minimalist design, large and beautiful screen, robust operating system, polished iLife suite of apps, and updated hardware, the new iMac is a great value for anyone looking for a desktop computer.

Michael deAgonia is an award-winning writer, computer consultant and technologist who has been using Macs and working on them professionally since 1993. His tech-support background includes tenures with Computerworld, colleges, the biopharmaceutical industry, the graphics industry, Apple and as a Macintosh administrator at several companies.