The new Mac Pro unveiled by Apple CEO Tim Cook during an Oct. 22 keynote will be available to buy starting tomorrow, Apple announced in a press release.

Apple says the professional-grade desktop computer is built around a “unified thermal core” intended to draw away heat from the CPU with minimal noise.

The aluminum unibody design that’s a signature of Apple’s hardware takes the shape of a cylinder for the Mac Pro. There’s a single, large fan that sits atop the computer and pulls air upward from the bottom of the computer to cool it. Apple says it will run as quietly as the Mac mini.

Apple says its designed the Mac Pro with expansion in mind, but outside of the desktop enclosure. There’s an array of four USB 3.0 ports, six Thunderbolt 2 ports, two Gigabit Ethernet ports, and an HDMI 1.4 output.  Wireless support for 802.11ac WiFi and Bluetooth 4.0 are also included. 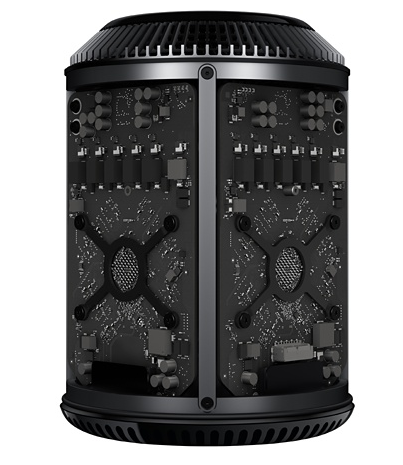 The entry-level Mac Pro is a 3.7 GHz quad-core Intel Xeon E5 processor that can run at up to 3.9 GHz with Intel’s Turbo Boost feature; dual AMD FirePro D300 graphic processors with 4 GB of total video memory; 12 GB of RAM; and a 256 GB PCIe-based flash storage drive. It is priced at $3,099.

An upgraded model with AMF FirePro D500 GPUS with 6 GB of total video memory and 16 GB of flash storage is priced at $4,099. Buyers can customize their desktops in a number of ways, including opting for a more powerful multi-core processor (8-core or 12-core Xeon E5s) or the AMD FirePro D700 GPUs, and up to 1 GB of flash storage.

Mac Pro computers may be used by professionals that need a lot of horsepower under the hood of their computer case and is most often associated with the creative industry – those working in video production, photography, media, and architectural professions.

Brian Jacksonhttp://www.itbusiness.ca
Editorial director of IT World Canada. Covering technology as it applies to business users. Multiple COPA award winner and now judge. Paddles a canoe as much as possible.
Previous articleRon Deibert: Internet freedom comes down to a ‘clash of two world views’
Next articleFederal government to set rules on domestic roaming rates