If you’re looking for the performance of a <a

href=”http://www.itbusiness.ca/it/client/en/home/news.asp?id=48538″target=”blank”>MacBook Pro without the Pro price, then you’re going to like Apple Inc.’s newly updated MacBook.

The MacBook, unveiled with updates to the iMac and Mini lines last month, is still priced at $999 — $200 less than the 13-in. aluminum-clad MacBook Pro. But compared to the model it replaces, Apple’s latest entry-level portable delivers an updated architecture, a beefier hard drive and a higher-quality screen.

The biggest change from the old model is the redesigned plastic housing, which is created using Apple’s “unibody” manufacturing process. While still encased in the shiny white plastic that has been the hallmark of the line for years, Apple’s latest MacBook forgoes the boxy look in favor of flowing lines, swooping angles and a precision fit.

A really simple way to turbo-charge your MacBook

The end result is a solid laptop that feels sculpted instead of assembled and has the processing power users need.

Not only is it curvier, but the MacBook now weighs in at 4.7 pounds — 0.2 pounds lighter than before. It’s still just over an inch thick when closed.

The screen size is the same, 13.3 inches, with a native resolution of 1280 x 800 pixels. But the new model features an LED backlight, improving the picture dramatically. It’s brighter and offers a better viewing angle from side to side than its predecessor, minimizing color. The contrast ratio is the same as the pricier MacBook Pro, although the Pro screens have a 60 per cent greater color gamut and a glass display.

Speaking of glass, the redesigned MacBook now features the larger glass-coated multi-touch trackpad found in the MacBook Pro and Air models. This trackpad offers support for the two-, three- and four-finger gestures Apple has popularized in its other laptops, and they work just as well here. 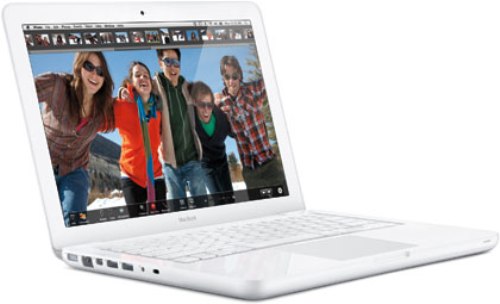 * The MacBook has a brighter LED backlit screen and a glass-coated trackpad (photo © Apple Inc.)

The keyboard, too, is virtually the same as the keyboards used in the more expensive Pro and Air models, except that the MacBook’s keys are not backlit. Typing feels just as solid as it does on Apple’s other models, although I noticed that when the MacBook is in heavy use, you can feel heat rising through the keyboard. (It still doesn’t get as warm as my 15-in. MacBook Pro.)

Internally, the MacBook has much in common with the low-end MacBook Pro. Both feature a 64-bit 2.26GHz Intel Core 2 Duo with 3MB of on-chip shared L2 cache running at the same speed as the processor, 2GB of 1066MHz DDR3 SDRAM, and a 1066MHz frontside bus. (You can double the RAM to 4GB for $100.)

Video is provided by the Nvidia 9400M graphics processor, which borrows 256MB from main memory for video RAM but still supports OpenCL and Grand Central Dispatch. Those two technologies in Mac OS X 10.6 Snow Leopard allow the GPU to be used in concert with the main processor

For users planning video chats, the MacBook has the now-common iSight camera built into the bezel above the display. And, as in the previous model, the MacBook’s ports are all located on the left side, with the optical drive on the right.

In addition to the Magsafe power adapter (which looks more like the Air’s magnetic plug than those that come with Pro models), the MacBook offers gigabit Ethernet, a Mini DisplayPort, two USB 2.0 ports, a single port for audio in/out, and a slot for a hardware lock. Apple has now consolidated the audio in and out ports, and the MacBook will work with an iPhone headset that has a built-in microphone.

With this version, however, Apple dropped the FireWire port. For most people, USB 2.0 is fine for connecting external drives and digital cameras. But if you have a FireWire 800 peripheral that you absolutely have to use, you might have to step up to the MacBook Pro.

The stock hard drive holds 250GB of data and spins at 5,400 rpm. It represents a nice bump from the 160GB drive on the previous model, but if you need even more room for your files, you can upgrade to a 320GB model (for $50 more) or a 500GB drive (for an extra $150). Too bad none of those is a 7,200-rpm drive or a solid-state drive. Either would offer a speed boost, but likely conflicts with Apple’s effort to keep prices down.

Rounding out the feature list are 802.11n-based Wi-Fi networking, Bluetooth 2.1+EDR and the now-standard, slot-loading SuperDrive that reads and writes to both CDs and DVDs. 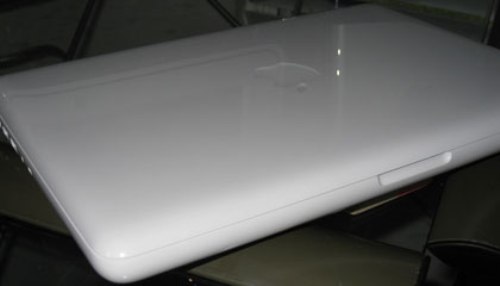 Taken all together, the well-equipped MacBook represents largely incremental updates to the architecture of the previous model.

Apple has continued the trend toward sealed, non-swappable batteries that debuted early last year in the MacBook Air by adding that kind of battery to the MacBook. While the battery can be accessed — after removing eight screws — it is definitely not swappable on the fly.

Although Apple estimates the battery is good for seven hours, I found I could stretch that time out over the course of a nine-hour work day — as long as I put the machine to sleep when it wasn’t in use. If you’re using it continuously, the 60-watt-hour lithium-polymer battery lasts closer to four hours, depending on how hard you tax the CPU and hard drive. As always with battery use, your mileage will vary.

How long will the MacBook’s battery last? Apple says it’s good for up to a thousand recharge cycles, or about five years under normal use. The built-in battery is part of Apple’s green technology efforts — its logic being that a non-removable battery can be larger, thus increasing overall battery life. Apple charges $129 for battery replacement and “responsible disposal” of the older battery if it wears out. Given that the built-in batteries are fairly new, it’s too soon to say whether Apple’s longevity estimates are optimistic.

Apple has been touting its environmental friendliness for the last few years, and company officials note that the MacBook is free of brominated flame retardants (BFRs), polyvinyl chloride (PVCs) and mercury; uses an arsenic-free display; is made of recyclable polycarbonate and comes in packaging that’s 20 per cent smaller than before.

The MacBook meets Energy Star 5.0 requirements and has been rated EPEAT Gold. In other words, you can buy a MacBook with a good green-technology conscience.

The rubber material Apple uses on the bottom provides just enough resistance so that the MacBook doesn’t slide off desks — or laps. And unlike some of Apple’s earlier laptops, the MacBook can be used on laps without making your legs too hot.

How does it all stack up? Programs on this MacBook, whether you’re running iMovie, iPhoto, Mail, or Apple’s Safari Web browser, zip along quickly. A MacBook will never be a performance machine, but it’s not supposed to be.

What matters is that it delivers enough performance for mainstream users.

Applications launch quickly; QuickTime movies play without a hitch, even at high resolutions; and the sealed-in battery holds up admirably in daily use. 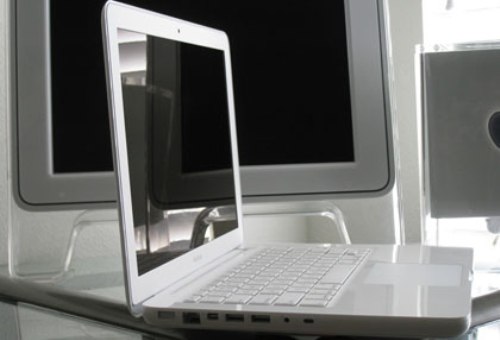 * The MacBook’s ports are all on the left side. Note the reflective screen

So is the MacBook right for you? It is, if you’re looking to trim costs as much as possible but still want a high-quality Apple laptop. All things considered, the MacBook’s build quality, LED screen, updated components and, of course, Snow Leopard make it a solid deal at $999. Of course, for $200 more, the 13-in. MacBook Pro offers an aluminum case, a display enclosed in glass, a backlit keyboard, up to 8GB of memory, an SD slot and a FireWire port.

Personally, I think every Apple computer should offer a FireWire connection, since that allows you to take advantage of Target Disk Mode. For the uninitiated, Target Disk Mode allows a Mac to function as a hard drive, bypassing Mac OS X, when the T key is held at startup. That makes it easy to plug one Mac into another using a FireWire cable for file transfers or troubleshooting. It’s a feature that’s just as useful for mainstream buyers as it is for IT support staffers. (Even without FireWire you can still connect Macs using an Ethernet or USB cable – or a wireless connection — to transfer files — but it’s a less elegant solution.)

It’s important to note that the MacBook comes in only one size. So if you need something larger than a 13-in. screen, you’re going to have to move up to a 15-in. MacBook Pro. You get a lot more computer with that model, but it costs $1,699. (Apple once offered its entry-level laptops in two sizes: a 12-in. model and a slightly larger 14-in. model. Those were discontinued when the MacBook line was introduced in 2006.)

Also be mindful that the MacBook comes only in white; the black model was discontinued a year ago. From my experience, earlier models — especially the old iBooks that pre-dated the MacBook line — had a tendency to yellow over time. After a few years, they were more of an ivory white than bright white.

If you can live with that minor caveat and don’t need any of the features on the MacBook Pro, then you’ll be more than happy with the new MacBook. It offers a compelling computer at a compelling price. Performance is close to that of the low-end MacBook Pro, and the hardware is designed to get the most out of the operating system.

And the new unibody construction offers an air of elegance that earlier models can’t match. The updated look, with its rounded corners and sleek lines, is what will draw buyers’ attention, but the beauty is more than skin deep.

Michael DeAgonia is an award-winning writer, computer consultant and technologist who has been using Macs and working on them professionally since 1993. His tech-support background includes tenures at Computerworld, colleges and Apple, and in the biopharmaceutical and graphics industries. He has also worked as a Macintosh administrator at several companies.