Apple Inc. revealed the newest iteration of its MacBook line today, adding a range of upgrades including the latest Intel processors, improved graphics card performance, faster flash storage, an additional hour of battery life, and a fourth colour that users can choose for the product’s aluminum finish – rose gold.

Touted by Apple as the company’s thinnest, lightest notebook yet, the updated MacBook features a 12-inch display, full-sized keyboard, and all-day battery life, in a device that weighs only two pounds and is only 13.1 mm thick.

Powered by sixth-generation dual-core Intel Core M processors, with turbo boost speeds of up to 3.1 GHz, and a new Intel HD Graphics 515 card that performs up to 25 per cent faster than the previous MacBook generation, it’s also a powerful computer in its own right. Also like the line’s previous generation, it remains cool enough to not require a fan. 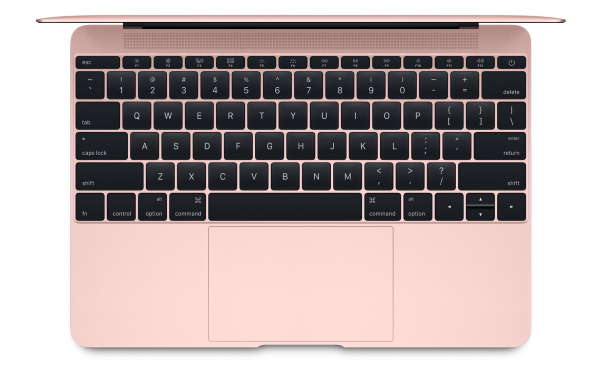 Another feature that users might want to make note of is the MacBook’s reliance on a USB-C port, which allows for charging, data transfer, and video output in a single connector, but is also one-third the size of a traditional USB, though you can purchase accessories such as the (poorly reviewed) USB-C Digital AV Multiport Adapter, which includes HDMI and standard USB ports, to address this concern.

The device is also wireless ready, with built-in 802.11ac Wi-Fi and Bluetooth 4.0 hardware, and like all Apple computing products, comes with (the well-reviewed) OS X El Capitan, artist-friendly software including iMovie and GarageBand, and the iWork suite.

The new MacBook is available through Apple’s website starting today, and in the company’s retail stores starting tomorrow at a price ranging from $1,549 to $1,899 depending on the processor and amount of memory chosen.

Eric Emin Wood
Former editor of ITBusiness.ca turned consultant with public relations firm Porter Novelli. When not writing for the tech industry enjoys photography, movies, travelling, the Oxford comma, and will talk your ear off about animation if you give him an opening.
Previous article
Rogers introduces new high-speed Internet service for SMB market
Next article
Now you can stream live 360-degree videos on YouTube