Santa Clara, Calif.-based Filemaker, Inc., an Apple Inc. subsidiary, is releasing a series of free guides for companies interested in using its software to develop their own in-house apps.

The first, Plan, which the company said will be followed by two future publications, was released as a downloadable eBook today.

With companies relying on an expanding number of devices, including tablets, laptops, smartphones, and desktop computers, to conduct business, in-house custom apps are an increasingly valuable tool that can be used to keep track of spreadsheets, media files, documents, reports, and custom information.

To help them, Filemaker is dividing its guides based on what it calls the “three steps” to building a successful in-house app: plan, create, deploy.

The 37-page Plan divides the first step into five stages:

The full guide, which breaks each stage down into a series of easy-to-digest infographics and bullet points and could easily be used as the basis of a presentation, provides a series of guidelines to follow and questions that would-be developers should ask themselves, such as who will be using the app, where they will be using it, and what they need it to do (the journalistic “five W’s and H” provide a useful framework in general, the guide notes).

When it comes to goals and app requirements, Filemaker recommends focusing on user needs rather than features or organizational goals, as the former will naturally lead to the latter: 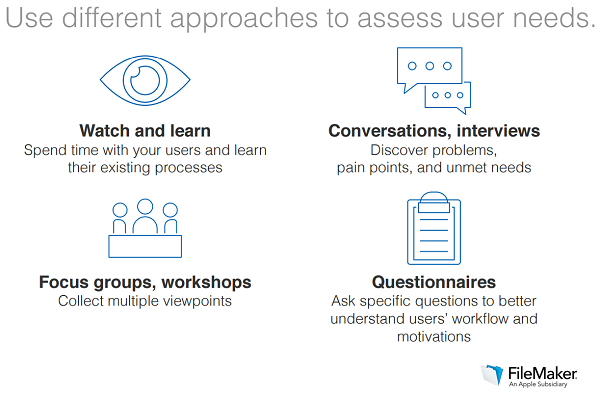 With security and integration, Filemaker recommends that development teams consider the sensitivity of data being processed, and whether the data sources used are owned and controlled by the company developing the custom app, or provided by a third party, as the latter will necessarily increase the app’s complexity.

Eric Emin Wood
Former editor of ITBusiness.ca turned consultant with public relations firm Porter Novelli. When not writing for the tech industry enjoys photography, movies, travelling, the Oxford comma, and will talk your ear off about animation if you give him an opening.
Previous articleNew Facebook tool lets marketers target audiences based on individual interests
Next articleTwitter takes on trolls with new Trust & Safety Council