Apple has revealed that the iOS 4.1 update will be launched today.

For a brief time over the weekend, the company’s U.K. site stated that the update, which CEO Steve Jobs said would be released this week, would be available Wednesday, Sept. 8.

The site was quickly revised to show a notice saying only that the download was “Coming soon,” the same message that has been posted on Apple’s U.S. site since Jobs introduced the operating system upgrade and touted its new features last week.

Along with new functionality included with iOS 4.1 — ranging from “high dynamic range” (HDR) photography that produces more detail in over- and under-exposed areas, to the launch of Apple’s Game Center multi-player online network — Jobs also promised that the update would fix some of the bugs in iOS 4.0 that users have been complaining about since that version’s June 21 debut.

Owners of older iPhones, especially 2008’s iPhone 3G, are hoping that iOS 4.1 solves the slow-down problems many have experienced since they upgraded this summer.

Jobs listed “iPhone 3G performance bugs” last week when he ticked off the fixes to expect in iOS 4.1.

According to Lifehacker.com, which got its hands on an unauthorized version of iOS 4.1, the update outperformed iOS 4.0 in informal tests, although the speed improvements were sometimes minor.

Unlike rival OS developers, such as Microsoft, Apple doesn’t issue updates on a specific day of the week. Apple released iOS 4.0 on a Monday, iOS 3.1 on a Wednesday, iOS 3.0 on a Wednesday, and iOS 2.2 on a Friday.

Leaked developer builds of iOS 4.1 weigh in between 308MB and 590MB, but it’s unknown how large the production versions of the upgrade will be tomorrow.

Apple releases its mobile operating system updates via iTunes. Users will have to download iOS 4.1 to their Windows PC or Mac using iTunes, then sync their iPod Touches or iPhones to the machine. 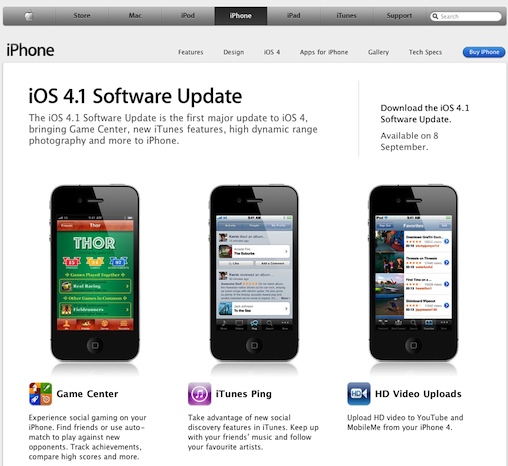