If Apple was to develop a smartwatch, Apple diehards would slap it on their wrist. That may seem like an obvious statement, but now there’s research to back it up.

A new study from 451 Research shows what the research firm calls “strong consumer interest” in a rumoured Apple iWatch, particularly among consumers already loyal to the Apple brand.

More on smartwatches that are real, not just rumoured
Are smart watches really a smart idea?
Pebble gives first sneak peek at its record breaking smartwatch

“Apple’s track record of delivering ultra-convenient, easy to use products with a perceived ‘cool factor’ is driving pre-release demand for the rumored Apple ‘iWatch,'” said Andy Golub of 451 Research’s ChangeWave service, in a statement. “While an ‘iWatch’ doesn’t yet exist – and if it ever does it will have to live up to super high expectations – it has the potential to be another huge success for the Cupertino, CA manufacturer.”

The rumoured device (Apple has filed a patent, with the image above), as envisioned by analysts and observers, could sync with an iPhone or iPad to handle tasks such as phone calls and texting, and could also include mobile payments, Siri digital assistant and health monitoring sensors.

When asked if they’d buy an Apple iWatch if and when one becomes available, five per cent if respondents said it was very likely and 14 per cent somewhat likely. 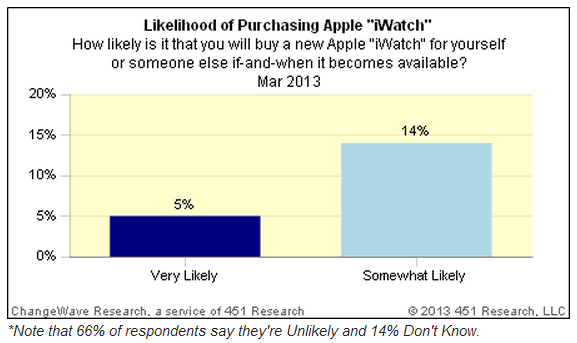 The numbers don’t seem high, but they mirror the interest level recorded before the launch of the Apple iPad tablet in 2010. 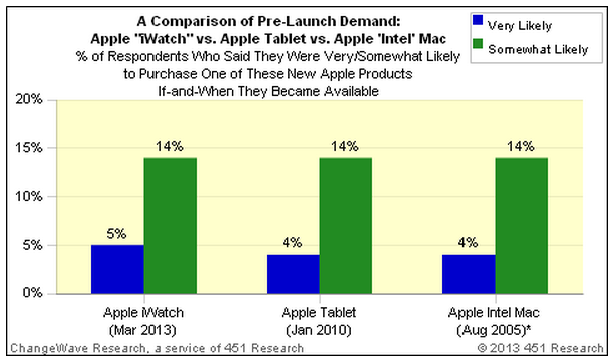 And when restricted to current Apple product owners, the numbers rise higher, to seven per cent very likely and 18 per cent somewhat likely.

While an Apple smartwatch is still speculative, several very real offerings are already on the market, with varying levels of functionality and smartphone integration. There’s the Pebbe, a crowdfunding darling that raised $8 million on Kickstarter to fund its launch, as well as the Motoactv, a fitness-focused tool from Motorola Mobility. Another is the Cookoo Smart Watch, another crowd-funded smartwatch. Several other vendors are also looking at or are entering the space.

Jeff Jedras
Jeff Jedras is a technology journalist with IT World Canada and a member of the IT Business team. He began his career in technology journalism in the late 1990s, covering the Ottawa technology sector for Silicon Valley North and the Ottawa Business Journal. He later covered the technology scene in Vancouver before joining IT World Canada in Toronto in 2005, covering enterprise IT for ComputerWorld Canada and the channel for Computer Dealer News. His writing has also appeared in the Vancouver Sun & the Ottawa Citizen.
Previous articleEnterprise vendors must know how to triage before marketing to SMBs
Next articleHow green is your IT?