Apple Inc. has started billing its Canadian customers more than American customers to download apps as it comes off a record-breaking year for revenue.

An email sent by Apple to developers on Wednesday said a price increase could affect App Store users in Canada, Norway, and European Union countries within 36 hours. On Friday morning, Canadians saw a minimum price hike of $0.20 per app, so an app that was previously $0.99 is now $1.19. The reason behind the price hike is the falling loonie, which sits at about $0.85 cents to one US dollar at time of writing.

Meanwhile, Apple announced today that the first week of January set a new record for billings from the App Store, reaching nearly half a billion dollars world wide. New Year’s Day was the single biggest day for App Store sales history. Perhaps people were busy redeeming the gift cards they opened for Christmas.

That record-breaking start to 2015 follows a record-breaking year for the App Store in 2014. Apple says billing rose 50 per cent and apps generated about $10 billion in revenue for developers alone. (Given that Apple does a 70/30 split with developers on app sales, you can project that Apple made about $4.2 billion off those sales.)

When the App Store launched July 10, 2008, the Canadian dollar was practically at parity with the greenback. Since then it has seen the dollar drop to around $0.77 USD for a brief period, and climb up to more than $1.05 USD. In recent weeks, the Canadian dollar has been trending downwards compared to the US dollar as resource prices are sliding back to recessionary levels.

App Store price hikes stand to impact individual users marginally. Although seeing apps priced at $1.20 or $1.30 might have some psychological impact, those extra pennies probably won’t break the bank for most Canadian with an iPhone or iPad in tow. But for businesses that are buying apps en masse for a few hundred or thousand corporate users, that extra 20 per cent could be meaningful.

But how much would an Apple policy of hiking prices for Canadians make a difference between typical App Store pricing variations as a result of changes made by app makers? After all, apps aren’t priced statically – just like any other product, they are strategically changed to try and meet demand. To get a sense of what sort of app price fluctuations we might see normally, we took a look at three of the most popular paid apps in the Productivity or Business categories on the App Store. Take a look at the results just for 2014: 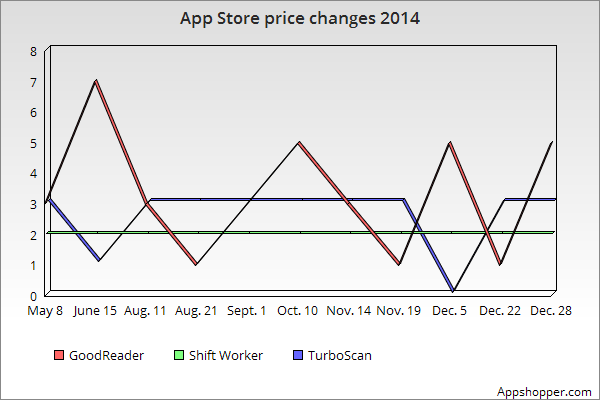 According to price tracking from AppShopper.com, GoodReader (used for reading PDFs and other documents) changed its price 11 times in just one year. It went as high as $6.99 to as low as $0.99 in that period (with that price being available for the shortest time periods). TurboScan changed its price five times in 2014, varying a bit less, but even offering its app for free for a brief period. Another app, Shift Worker, stayed consistent at a price of $1.99.

The point is that while Apple’s price change will make every app in the App Store more expensive for Canadian buyers, the real cost savings could come from waiting for manufacturers to drop their prices, even if it’s for a promotional stint. In situations where an app has to be acquired for an entire organization, if companies are not already negotiating for a group licencing fee, it might be worth it to track prices. You can even set up alerts using sites like Appshopper.com to let you know when an app hits your target price.

Brian Jacksonhttp://www.itbusiness.ca
Editorial director of IT World Canada. Covering technology as it applies to business users. Multiple COPA award winner and now judge. Paddles a canoe as much as possible.
Previous article
Tablet users are set to grow to more than 1 billion in 2015, but that number is due for a slowdown: eMarketer
Next article
Video consumption – and therefore advertising – set to grow on social media in 2015