Wikipedia and others who participated in an unprecedented Internet blackout Wednesday have brought their sites back online with the promise to keep their battle going against the contentious Protect IP Act (PIPA) and the Stop Online Piracy Act (SOPA).

In a messageon its Web site, Wikipedia thanked the people who supported itsblackout yesterday, but said, “We’re not done yet.”

Wikipedia was one of several large Web sites participating in theInternet “strike” yesterday. The site blacked out its content andreplaced its usual homepage with a message warning visitors about thetwo anti-piracy bills. Other sites that did much the same thingincluded Reddit, BoingBoing, Tucows and an estimated 10,000 ormore smaller websites. 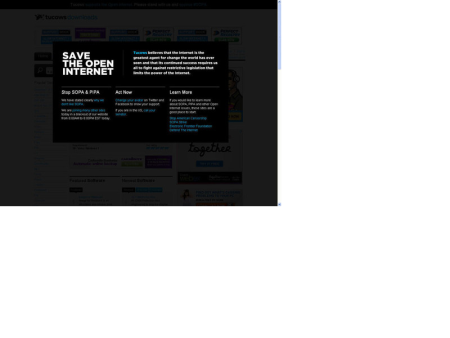 Search giant Google participated in the protest, too, but did not blackout its site. Instead, it blacked out its main logo.

Fight for the Future,one of the groups that organized the protest said that four of the top10 Internet sites, 13 of the top 100 and another 40,000 smaller sitestook part in the blackout. Of those numbers, 37,000 of the sites thatwent dark were on WordPress.com, the organization said.

It also offered an onlinerundown of statistics related to the online protest.

In all, more than 4.5 million signatures were collected and two millionemails sent through groups such as the Electronic Frontier Foundation(EFF), Demand Progress and Fight for the Future, the group said.

According to the EFF, between 9 p.m. Tuesday and this morning, nearly396,000 people signed its online petition, resulting in close to 1.2million emails to Congress.

“Our next action against the blacklist legislation is a call-in day tosenators on Monday,” said Rainey Reitman, activism director at EFF.”We’ve seen incredible successes in the last 48 hours, but we need tomake sure this proposal is good and dead before we let up. Ideally, I’dlike to kill this bill so thoroughly that Congress won’t even think tointroduce a replica.”

Tiffiniy Cheng, co-founder of Fight for the Future, said the groupplans to carry on its protests until both bills are dropped.”Unfortunately, the Protect IP act is still scheduled for afinal vote this Tuesday” in the U.S. Senate, Cheng said. “We haven’theard from Sen. [Patrick] Leahy yet that he is pulling the bill.”

Fight for the Future plans to ask Interent users to flood the phonelines of their local representatives starting Jan. 23. The group’s mainWeb site will also host a live audience participation stream whereprotesters can submit their concerns to a handful of senators who planon filibustering the vote, she said. The group is also trying toorganize a series of in-person meetings with senators around thecountry, Cheng added.

Brock Meeks, communications director of the advocacy group the Centerfor Democracy and Technology (CDT), which also participated in theblackout, said traffic to its site increased 10-fold on Wednesday.

“As of this morning, the traffic is still running close to thatincrease,” Meeks said. He added that CDT plans to stay engaged with thenew “geek lobby” that appears to have sprung up in opposition to SOPAand PIPA. “We will continue to be active in monitoring the legislativeprocess going forward and will make our expertise in this areaavailable to congressional staff, if they choose to call on us.”

Despite the protests, the bills are far from dead, Wikipedia cautioned.”SOPA and PIPA are symptoms of a larger issue. They are misguidedsolutions to a misunderstood problem.”

Security vendor ZScaler yesterday pointed to a noticeable increase intraffic to Wikipedia’s site during the blackout — mostlyfrom Internet users apparently curious to see what the site looked like.

While the number of users rose, the number of transactions per uniqueuser was much smaller compared to normal, ZScaler blogger Mike Geidenoted. “This behavior could be described as ‘online rubber necking,'”Geide noted in his blog.

Many also fear that the bills give too much power to content owners topursue sites that they deem are infringing on their rights. They arguethat the provisions in both bills would chill innovation and enable asort of Internet censorship and prior restraint in speech.

The growing crescendo of opposition to the bills has resulted in adramatic erosion of support for both SOPA and PIPA over the last fewdays. But both bills, though weakened, are still alive. The vote onPIPA is scheduled for Jan. 24 while SOPA is scheduled to be marked-upin early February.