Organizations that look to protect themselves against attacks launched by the Anonymous hacktivist collective should make sure that their Web applications are secure before deploying anti-DDoS (distributed denial-of-service) solutions, says security firm Imperva in a new report.

The report analyzes a 2011 Anonymous attack against an organization that Imperva declined to name, but claims is well-known. “This is the first time we’re aware of someone chronicling, from cradle to grave, a full Anonymous attack,” said Rob Rachwald, director of security strategy at Imperva, in a blog post on Friday. 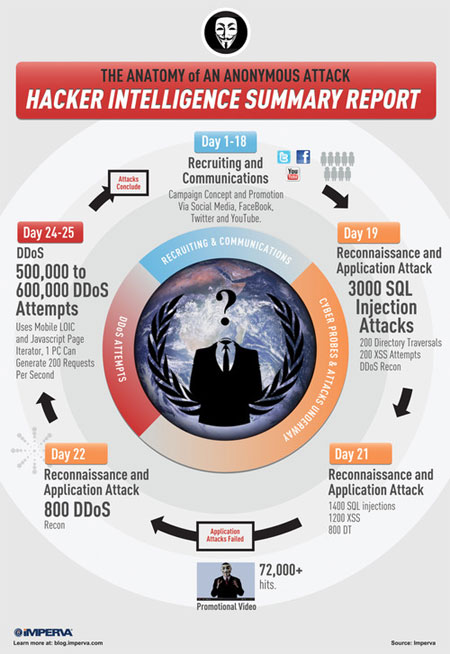 The report analyzes a 2011 Anonymous attack against an organization that Imperva declined to name, but claims is well-known.

Given the decentralized nature of Anonymous, anyone can start an action in the group’s name. However, for it to have any real effect, it needs to be promoted and eventually supported by a considerable number of individuals.

“There was an extensive usage of various automated tools for web application vulnerability scanning,” Imperva said in its report. “These scanners are general ‘off-the-shelf’ products and weren’t coded specifically for this attack.”

Anonymous members have learned from previous operations that data breaches have a bigger impact on companies than DDoS attacks, so they will first try to hack into their Web sites, Imperva said. “Possible attack victims should make it their priority to mitigate application vulnerabilities, even before mitigating DDoS attacks.”

One thing that distinguishes hacktivists from financially motivated attackers is that hacktivists generally announce their plans publicly, which gives targeted organizations time to prepare, said Amichai Shulman, Imperva’s CTO, in a phone interview. Companies should therefore monitor websites like Facebook, Twitter, Pastebin or YouTube in order to learn of potential attacks against their infrastructures.

Analyzing the server logs while the attackers are performing reconnaissance is also very important because it gives organizations an idea of what kind of attacks to expect and how to block them, Imperva said in its report.

Anonymous was viewed as little more than a nuisance a couple of years ago, but has since grown to be considered a real threat. Experts from various cybersecurity companies, including Imperva, are expected to speak about Anonymous and hacktivism at the RSA Conference 2012 in San Francisco this week.

In the overall picture they are still a nuisance because their attacks are pretty basic and are temporary, Shulman said, adding that Imperva detects more sophisticated and persistent attacks from financially motivated hackers every day. However, Shulman agreed that Anonymous is a lot louder and its actions get more publicity.

'Self-healing' cloud that detects, destroys threats in the works at MIT

Browser bible: How to choose the right software for Web surfing

CoinSmart and Needls co-founder thrives on treading into new frontiers