If you’re in the market to buy a new Android smartphone and want to avoid device crashes, consider Sony. If you want the most up-to-date OS, then consider Motorola, according to a new manufacturer report from Apteligent.

The mobile SDK provider for app developers probed its data across tens of thousands of mobile apps, representing hundreds of millions of app launches, from October 2015 to July 2016 to compare device stability and speed of delivery for new versions of Android. For the updates speed, Nexus devices weren’t included since the Google-branded handsets always get Android updates on the day they are made available. 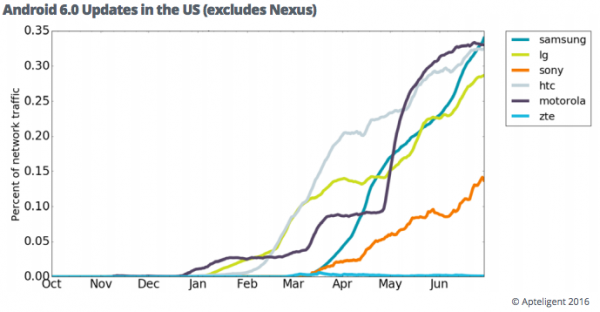 Based on U.S. data, Motorola was fastest to upgrade its devices to Android 6.0 Marshmallow. It first tested the update on its Moto X Pure Edition and X Style, then moved on two months later to roll it out widely. Other manufacturers to push out Android 6 M within three months were LG and HTC. Samsung and Sony both waited more than five months before pushing the update, and ZTE has only made the update available to a small number of its devices so far.

While Apteligent didn’t provide Canadian-based data in this report, it compared U.S. device updates to those in India and found a similar pattern.

To analyze how often a device crashes, Apteligent limited its data to apps that see at least 500,000 loads per day – in other words, widely used apps that are optimized and regularly updated. Newer devices were the focus of the survey as well, to avoid older models contributing high crash rates to the data.

In this area, Sony’s devices performed the best with a crash rate of just 0.08 per cent, followed closely by Motorola at 0.09 per cent. Samsung had a rate of 0.11 per cent, along with LG. Samsung’s devices have the most number of device types with more than 500,000 app loads per day.

What Android are you looking for?

Based on device stability and speed of updates, Apteligent recommends that those in the market for a new Android smartphone this year consider the next HTC Nexus device to get access to Android 7.0 first, or Motorola’s Z and Z Force devices if you want a good balance of stability and device updates.

Of course, Apteligent’s data here isn’t taking into consideration other factors that drive smartphone sales – the number of features available on the phone, the speed of its processor and amount of memory offered, the look and feel of the device, etc.

Worldwide marketshare of the Android smartphone market is currently dominated by Samsung, which shipped 23.2 per cent of smartphones in Q1 of 2016. That’s more than Apple, shipping 14.8 per cent, and Huawei in third at 8.3 per cent. HTC, Motorola (now owned by Lenovo), and Sony would all be shared the remaining 44.8 per cent of the market left after the top five.

Check out our Top business smartphones of 2016 series for more information about what smartphone is right for you.

Brian Jacksonhttp://www.itbusiness.ca
Editorial director of IT World Canada. Covering technology as it applies to business users. Multiple COPA award winner and now judge. Paddles a canoe as much as possible.
Previous articleGoogle Duo shows you video before you answer the call
Next articleLess than 1% of enterprises running Windows 10: Softchoice