AI will infiltrate every industry and businesses need to be prepared, experts say

If you think the disruptive nature of artificial intelligence (AI) will spare your particular industry, you’re wrong, according to the AI panel at ITWC’s seventh annual Technicity event held in Toronto on Dec. 12.

Whether it be interactive chatbots on enterprise websites or more sophisticated analytics platforms, chief architect at Amazon Web Services Glenn Gore says that every industry is or will be using some form of AI going forward.

The concept of AI, however, is more of an umbrella term that encompasses any research into machines doing intelligent work, the experts say. One popular subset of AI is deep learning or neural networks, which wants to mimic how human brains interpret and draw intelligence from data, while another specific research area, machine learning, looks into how technology platforms can learn new abilities by themselves without specifically being programmed to do so.

With that being said, Gore expands on his point, adding that most companies like Google and Amazon and other smaller tech businesses are actually playing in the machine learning space and attempting to use the innovation to solve complex business problems, like fraud, traffic management, etc.

GM, for example, is researching machine learning and how it can be applied to self-driving vehicles. Convincing talent to choose an automotive manufacturer over tech giants like Google or Amazon, however, has been a challenge.

“We’re hiring engineers to work on autonomous vehicles, but of course we have to compete with the rest of the tech industry,” says Ted Graham, head of open innovation at GM. “What we hope is compelling for them is that we’re not using AI to optimize clicks or make money with targeted ads and whatnot, we’re going for a moonshot; we want a car to drive itself and AI can help with that.”

GM is not alone in its open struggle to find AI talent. The industry is facing such a shortage of qualified workers that new graduates are often offered a seven-figure salary right out of school by corporations that can afford it – leaving little room for competition, the panel says.

Feeling the pressure is Yevgeniy Vahlis, head of the applied machine learning group at Borealis AI, RBC’s institute for AI research, who says finding talent in the “AI war” has been a battle but that it too, is playing to its unique strengths to entice engineers.

“It’s definitely a battle to find talent, but what’s appealing about us is the openness of the direction of our institute,” he tells the audience at Technicity. “We’re not necessarily business-oriented, we’re trying to have an impact on all of society. We also have a really great fun and open culture and we think young people finishing their studies especially would be interested in us because this is just a continuation of their university world.”

A new directory launched this month will help pave the way for businesses across Canada to participate more easily in one of the country's fastest-growing industries. Developed by ITBusiness.ca parent company ITWC, industry

However, Andrew Graham, CEO at fintech company Borrowell, points out that most companies don’t even need AI experts immediately. He suggests companies build an AI business strategy and look around at some of the corporations with AI services already available to the public.

“We’re in the early stages of applying AI to business, but you don’t need to hire someone like Geoffrey Hinton [the “godfather of deep learning”, Emeritus Distinguished professor at the University of Toronto, Google researcher, and chief scientific advisor at the Vector Institute for AI] to have an impact,” he explains. “You can get pretty far in implementing AI without breaking the bank to hire an expert. Look at how the cloud has developed – you don’t need to build your own, you can lease cloud services from Amazon or Google. I believe AI will work in a similar fashion.”

For those who have yet to enter the AI space, Vahlis encourages companies to forge partnerships with those that have AI experience.

“If you’re new to AI, you probably don’t know who all the players of the industry are, so build relationships with those that might and work together to make progress,” he adds.

Borrowell’s Graham, on the other hand, recommends businesses need to “just get started” – and Gore expands on this thought.

“Take the leap and get started. Things like AI image recognition, text-to-speech, and video translation are all available now, so there isn’t much holding you back,” he says. “It doesn’t take months anymore; I’ve seen companies go from nothing to a business idea and having an AI-enabled service like a chatbot work in two or three weeks.”

So if you’re a business considering jumping on the AI bandwagon, take some expert advice and just do it. 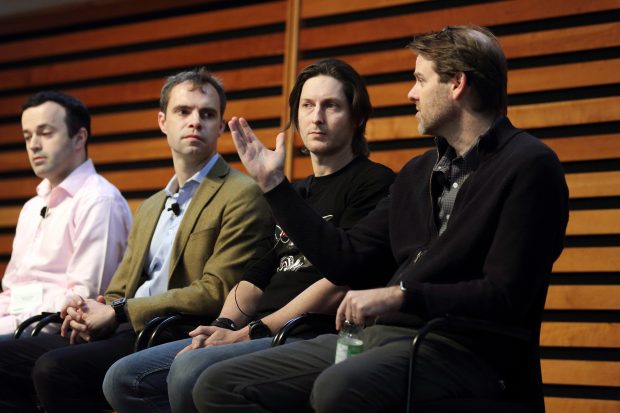 A fresh editorial look at ITWC for 2018

Mandy is a lineup editor at CTV News. A former staffer at IT World Canada, she's now contributing as a part-time podcast host on Hashtag Trending. She is a Carleton University journalism graduate with extensive experience in the B2B market. When not writing about tech, you can find her active on Twitter following political news and sports, and preparing for her future as a cat lady.