Acrobat.com is a suite of Adobe applications that allows users to create, store and share documents and PDF files — as well hold conferences and collaborate — online.

Up until now the service was in beta development, and its applications available free to users who signed up for an Acrobat.com account

Today, as the beta period ends, Adobe has announced a subscription-based Acrobat.com service, which includes an upgraded and expanded version of its popular ConnectNow online conferencing application.

ConnectNow allows participants to collaborate with text and audio chat, video conferencing, whiteboard, screen-sharing and collaborative remote control of any of the participants’ computers, with their permission.

During the beta period, ConnectNow’s free service could be used for online meetings with up to three participants.

“The free service will continue,” noted Rick Treitman, entrepreneur-in-residence at Adobe. “We want everybody to have an [Acrobat.com] account, create documents, presentations and spreadsheets.” Treitman is former CEO of Virtual Ubiquity, the firm Adobe acquired in December 2007 primarily for its Buzzword offering. 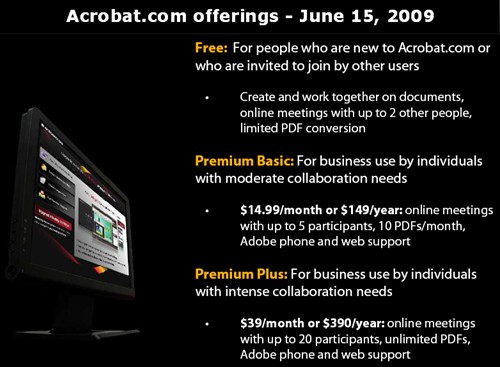 He said for online meetings involving three people or fewer, the service will continue to be free.

However, for larger work groups, Adobe is now offering a paid subscription to Acrobat.com, with expanded capabilities and enhanced support.

Starting today, Treitman said, customers will be able to book subscriptions, selecting from among two plans:

Premium Basic – Priced at US$14.99 a month, or $149 a year, this plan supports meetings with up to five participants, and enables the creation of up to 10 PDFs a month.

Premium Plus – This US$39-a-month (or $390 a year) plan supports online meetings with up to 20 participants, and allows creation of an unlimited number of PDFs.

Both the Basic and Plus plans come with Adobe phone and Web support. (Users of the free service rely on e-mail and forums for customer support).

Treitman says a broad range of knowledge workers and teams could benefit from these offerings, including consultants, product managers, and writers – who currently rely on e-mail as their primary mode of collaboration.  “These people say improved collaboration could make them 50 per cent more productive.”

A Spreadsheet with a View

Another banner announcement from Adobe today is the release of an early version of its Spreadsheets service — on Adobe Labs.

“Such a spreadsheet usually lives on a server some place, and only one person at a time can open the document and change it. But when you bring that document to the Web, multiple people can be in it, viewing and changing it.”

While such simultaneous editing solves many problems, it can also create a few, he noted. For instance, a “sort” done by one member of the team on a shared spreadsheet could complicate things for another team member, he said.

“If while Bob is looking at a particular row, I filter the material by region (say), because I only want to look at North American sales — this could just blow Bob out of the water. He wouldn’t know where he is.”

Adobe’s solution to this conundrum is including a feature called Private View.

In Private View, Treitman said, “any filter or sort I apply to the spreadsheet, will only be seen by me. Everybody else is looks at the spreadsheet the way they want to.”

Besides Spreadsheets (that was added to Labs today), Presentations is another in-development app placed in Labs a couple of weeks ago. It will continue to be accessible to anyone with an Acrobat.com account.

This free service, which was also in public beta, enables users to build Flash presentations through their browsers.

Presentations created with this application can be enhanced with multimedia and transitions. It uses the Adobe’s Buzzword word processor — a Microsoft Office Word competitor — to edit text on slides.

Unlike Buzzword, Treitman noted, Presentations supports simultaneous editing. “Many people can be editing a slide at the same time. I may be working on graphics, someone else on text, and so on. As we do, little icons will communicate our presence to everyone in the group.”

Future capabilities to be included in Presentations, includes links to Photoshop.com and to Kuler – Adobe’s online application for creating colour themes.

“In a subsequent release [of Presentations] we will be connecting to Kuler,” Treitman said, “so users will be able to pull colour sets directly from the service.”

He said upcoming releases of Presentations will also enable users to share and pull assets – such as images – from various image sites. 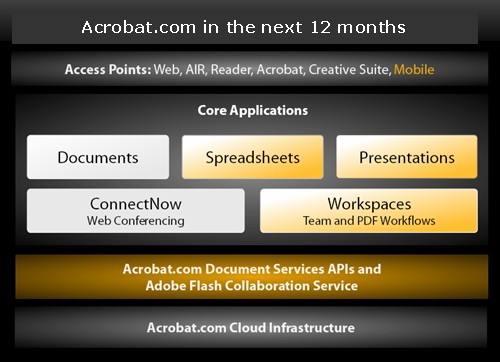 “Right now Presentations doesn’t have a filter for importing and exporting PowerPoint slides. We know it should have this and are hard at work to make it happen.”

Treitman said new functionality would added to collaboration applications while they reside in Adobe Labs. “We will work on them until we think they can come over to Acrobat.com and be part of the suite.”

He said both Presentations and Spreadsheets would live on Labs for a while as they aren’t yet complete.

Meanwhile, paid subscribers and users of the free service would be able to access other core Acrobat.com applications including Buzzword.

This online word processor allows users to create and collaborate on text documents.

The Buzzword “sharing bar” feature is one that users find particularly useful, Treitman noted, as it tells them who has rights to the document, and if someone is currently active in it.

When someone views document, the status button besides their name is green. “If the person were to start typing, it would turn red to tell everyone on the team that the document is being edited.”

The Sharing bar is included across all the other key Acrobat.com applications, including ConnectNow and Presentations, Treitman said.

He said the History bar enables users to compare multiple versions of the document, and see what’s been added, or deleted over time.

The ability to insert inline comments is one of the most compelling features of Buzzword, the Adobe executive said.

“When you work with a team, comments are a big part of the normal workflow. Rather than forcing you to get into the menu and select Insert Comment, each time you want to comment, we just allow you as you move through the document.”

Treitman said the user just needs to mouse over and click a little comment bubble on the right margin and it opens up.

“I can then type a comment. It will be time stamped and have my colour – and anyone working on the document will be able to see it.”

Over the course of this year, he said, Adobe would be releasing other products to further enhance online workgroup collaboration on Acrobat.com. These include:

Organizer – a tool that allows users to put documents created in separate Acrobat.com applications into collections … much like play lists. This will be available in the fall.

Workspaces – slated for a winter release – will be a collection of admin and management tools that participants in a workgroup would need to collaborate and keep track of documents and meetings.

Today’s announcements are the latest in a series of Adobe product and service offerings targeting the “collaboration” space.

Software “not a solo experience”

The social dimension of software development was a key theme emphasized by Adobe’s chief technology officer (CTO) Kevin Lynch in his keynote at the Adobe Max Conference in San Francisco, in November 2008.

“The reality today,” Lynch said, “is that software is no longer a solo experience. It involves your friends, and humanity around you.” He said Adobe’s goal is integrate this social dimension in all the software developed by itself and its partners.

“That means real-time collaboration with people in your network – whether through audio and video streaming, messaging, data sharing or asynchronous collaboration.”

At the Conference, Lynch demoed a technology called CoComo that enables developers to build collaborative features into their Web application.

Adobe’s hosting of services such as Photoshop.com and Adobe Acrobat Connect Pro – software for Web conferencing and e-learning is driven by the same philosophy, Lynch suggested.

But at least one industry observer believes uptake for collaborative services such as Photoshop.com will be mainly among users already committed to the underlying application (Photoshop).

“Adobe’s collaboration services definitely have some competition, for example Live Mesh from Microsoft, and I think that will reduce uptake,” noted Alan Webber, principal analyst with Cambridge, Mass.-based Forrester Research Inc. in an earlier interview. “I think uptake will be consistent but not necessarily significant in the near term.”

Webber sees a lot of potential in CoCoMo “due to the flexibility of the platform.”