Consulting firm Gartner Inc. has released its latest quarterly survey of global smartphone sales, and the results do not have good news for Samsung Electronics Ltd.

Fourth-quarter unit sales for the South Korean tech giant, whose leader is still being investigated for alleged ties to its impeached president’s corruption scandal, declined for the second time in a row, by eight per cent – a result at least partly related to last year’s Galaxy Note 7 disaster, Gartner research director Anshul Gupta said.

“Samsung’s smartphone sales started to drop in the third quarter of 2016, and the decision to discontinue the Galaxy Note 7 slowed down sales of its smartphone portfolio in the fourth quarter,” Gupta said in a Feb. 15 statement. “The withdrawal of the Galaxy Note 7 left a gap in its large-screen phone range.”

Samsung’s loss was Apple Inc.’s gain. The Cupertino, Calif.-based icon had an especially healthy quarter, thanks partly to the decreasing demand for Samsung products and partly thanks to healthy sales of its newest devices, the iPhone 7 and iPhone 7 Plus.

“The last time Apple was in the leading position was in the fourth quarter of 2014, when its sales were driven by its first ever large-screen iPhone 6 and 6 Plus,” Gupta said. “This time it achieved it thanks to strong sales of its flagship phones.”

However, Gartner noted that the gap between the world’s two leading smartphone makers has never been closer, with only 256,000 units separating them. 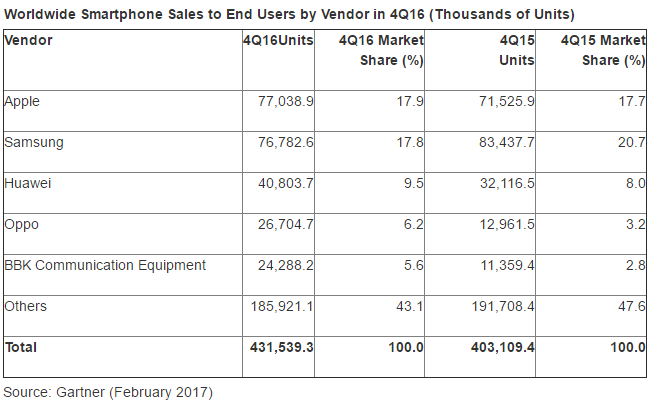 The company’s survey of smartphone operating systems, meanwhile, contained bad news for a different mobile icon: BlackBerry Ltd.’s flagship OS now effectively commands zero per cent market share (according to Business Insider, its exact market share was 0.0481 per cent), bringing its days as a viable alternative to iOS and Android to a definitive end. 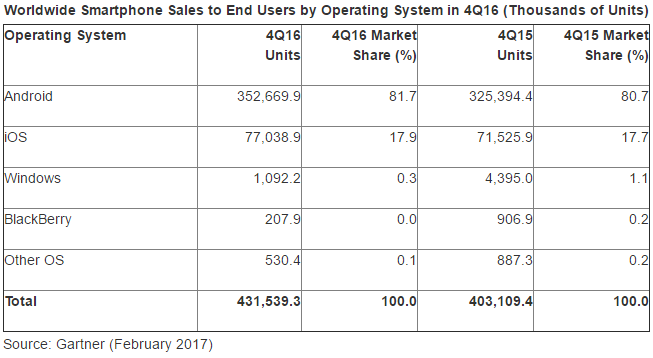 To be fair to BlackBerry, the company had long seen the writing on the wall, which is why it officially exited the hardware market last September, and why future BlackBerry-branded phones will run on Android rather than the last version of its OS, BB10.

Eric Emin Wood
Former editor of ITBusiness.ca turned consultant with public relations firm Porter Novelli. When not writing for the tech industry enjoys photography, movies, travelling, the Oxford comma, and will talk your ear off about animation if you give him an opening.
Previous article
Data breaches could cost Yahoo up to $350M USD, Reuters says
Next article
Samsung heir arrested on bribery allegations