To find a fellow Torontonian video games-entrepreneur that could mentor his own Toronto-based startup Uken Games, CEO Chris Ye had to go to New York City.

That’s where he met Daniel Sennet, a fellow Toronto native now working as director of operations at Arkadium Inc., a game development studio that develops popular Facebook and Web-based Flash games for various media sites. Its games are played by more than 8.5 million people per month. But there were a lot of challenges overcome on the way to that success, and Ye says he was lucky to benefit from that wisdom.

“I spent at least three hours with Daniel on my initial trip” to New York, Ye says. “We’ve been speaking on e-mail ever since.”

Sennet’s advice helped the Uken Games CEO determine what his developer’s focus should be on. He encouraged Ye to think bigger about potential opportunities and to not be afraid about dedicating a lot of the firm’s resources to a project that held promise – even if that meant cutting back on other projects that were already in the works.

That mentorship was the most valuable part of his participation in the Canadian Technology Accelerator (CTA) in New York City. Ye was one of six companies in the first cohort to participate in the federal government program designed to help Canadian tech firms access global markets, using the Big Apple as a conduit. The program was officially announced in early February at a press conference held by Ed Fast, the federal minister of international trade.

Run by the Canadian Trade Commissioner Service in New York City, the CTA is modeled after a Silicon Valley-based initiative of the same name. It provides promising tech firms with office space in General Assembly, a building that is the unofficial startup hub of the metropolis. Participants are also introduced to mentors and potential investors. ITBusiness.ca spoke with staff and the consulate on background. 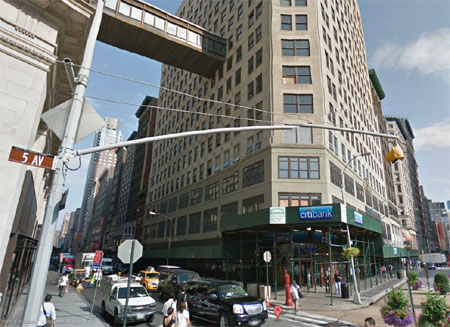 New York offers a different sort of startup culture than Toronto or Montreal, says Amber Lee, the co-founder of NYC-based marketing agency BRKLYN Haus. Lee also hails from Toronto, and has produced Web videos for the CTA. Namely, the difference comes down to two things – a collaborative work atmosphere, and access to cash.

“In New York there is a pretty strong community and a lot of resources,” she says. “New York has so many venture capitalists at your disposal. A lot of angel investors are coming together and investing heavily.”

Much of that collaboration occurs in the 17,000-square foot building General Assembly. CTA members get a three-month membership to use the shared office space and attend startup education and networking events. Uken Games was impressed with the space, Ye says.

“I was pretty blown away with how active and lively the space was,” he says. Ye attended a panel of notable startups that he found useful. “If we didn’t have this opportunity, we’d be oblivious to what was going on there.” 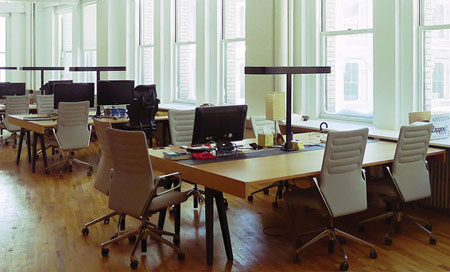 General Assembly’s work space is all about collaborating.

The CTA doesn’t provide its members with funding direct support for expanding operations, but focuses on helping to make partnerships. It assesses each entrepreneur with a one-on-one interview to determine their needs, and also helps them gain visibility by planning events. With a population of just 30 million, Canada doesn’t offer a huge market to digital firms that often rely on generating revenue from a large user base. Many are already expanding operations to large U.S. markets, and now the government is helping them get a foothold there.

“It’s about bridging these two communities together rather than uprooting them from Toronto to New York,” Lee says.

Uken Games won’t move its base from Toronto though, Ye says. Going to New York was an opportunity to tap into networks there, not set up shop permanently. Ye plans to travel south one more time before the program’s end, to meet with develops and attend gaming conferences.

CTA has closed recruiting for its second group of applicants, who will begin their placement at the end of May. But there will be two more cohorts for the program this year. If the program is judged a success, the government may launch more accelerators in other international tech meccas.

“Don’t be afraid to ask for what you want,” Ye advises entrepreneurs in the next cohort.

To improve the program, Ye recommends handing out a general list of people in the CTA network to all the entrepreneurs. Currently, the practice is to give each entrepreneur a select list of contacts. It’d be helpful to have a wider selection of contacts to pull on, Ye says.

After all, you never know where you’ll find your next mentor, and Ye found his in New York City.

Brian Jacksonhttp://www.itbusiness.ca
Editorial director of IT World Canada. Covering technology as it applies to business users. Multiple COPA award winner and now judge. Paddles a canoe as much as possible.
Previous article
Android OS to lead in Canada: IDC
Next article
Demand your data from Internet companies: Berners-Lee

Finger Food investment in Calgary a ‘call to action’ for tech companies...