Whether your laptop is a state-of-the-art screamer that cost you thousands of dollars or a budget model that cost just a few hundred, chances are its speakers make it sound about as good as an AM radio in the shower.

Notebooks have always come up short on sound because space and power limitations have meant everything is downsized, from audio chips and analog-to-digital converters to amplifiers and speakers. The result is tinny and distorted sound that never gets loud enough.

There is a better way. Just about every part of the laptop audio ecosystem can be improved. I’ve found nine audio enhancers that are easy to install and cost less than $130 each. You probably won’t want to buy all 10 products, but you can mix and match to best meet your needs.

I tested them all on a Fujitsu LifeBook A6220 with Windows Vista and a Think Pad R52 with Windows XP; the hardest to install took all of 15 minutes.

The difference can be like night and day, with richer, clearer and more vibrant sound. Regardless of whether your listening tastes tend toward the BBC’s Internet radio channel, videoconference chats or downloaded alt-rock, it’s time to sound off for better notebook audio. 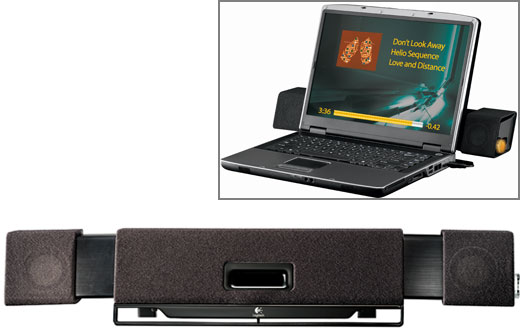 When I get back to my office after a road trip, the first thing I do is plug my laptop into a full-sized set of speakers. Logitech’s AudioHub does this one better by combining high-quality speakers with a USB hub, all via a convenient USB connection.

The AudioHub adds a 30-watt amplifier to a pair of 2.2-inch adjustable pull-out speakers and a 1.3-inch subwoofer. It delivers richer audio with warmer midrange tones and stronger bass than any notebook speakers can. The lighted power button doubles as a volume control knob. On the downside, AudioHub lacks a remote control and a headphone jack, and the three USB ports are hidden in the back.

Setting it up takes a couple of minutes, and the AudioHub is good for both PC and Mac notebooks. It comes with a two-year warranty; if you shop around online you can find it for about $75, which sounds like a bargain to me.

Digital all the way: Samson StudioDock 3i speakers 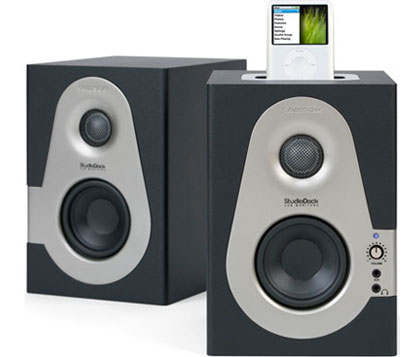 The beauty of USB-connected speakers is that the audio signal stays digital longer and sounds better than speakers plugged into the laptop’s headphone jack. Samson’s StudioDock 3i speaker set works with PCs and Macs (it also includes an iPod dock) and takes about 3 minutes to set up.

The speakers are powered by a 30-watt amplifier and each tuned port speaker case has a 3.25-inch woofer and a 1-inch silk dome tweeter. They pump out well-balanced sound that’s more than loud enough to annoy the neighbors. The set includes a three-year warranty.

Price: $110
Available from: a variety of audio retailers 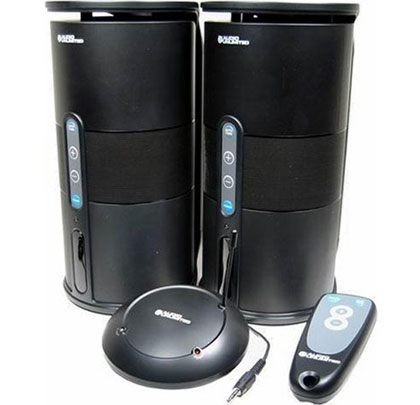 There’s nothing worse than trying to hide cables for speakers; where they sound best is rarely the most convenient spot. Forget about taping the wires to the wall or fishing them under carpets — the Audio Unlimited wireless speakers send sound over thin air.

Each speaker mini-tower has a 3-inch woofer and 2-inch tweeter to deliver improved midrange and crisp high-end response. In the typical office or home, the speakers have a range of just over 100 feet, and they come with a remote control that can turn them on and off and adjust the volume. The set includes a one-year warranty. 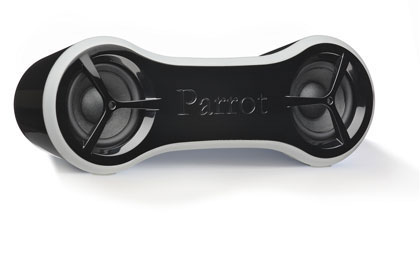 With a name like Party, you’d think that Parrot’s Bluetooth speaker system wouldn’t be serious enough for business. That couldn’t be further from the truth. This stereo speaker set weighs just 1.4 pounds and can go wherever you and your notebook go, making it a great tool for on-the-road presentations (not to mention celebrations).

It can connect with any notebook or digital music player with a standard audio cable or via its built-in Bluetooth radio that can use Near Field Communications technology. Parrot connected on the first try with my notebooks and a cell phone, but its range is limited to about 20 feet and it doesn’t get particularly loud.

Parrot may look like a large black dog bone, but it has a 6-watt amplifier and pair of speakers that combine for surprisingly sharp and vibrant sound. I really like the system’s Stereo Widening and Virtual SuperBass digital effects, which can make a low-quality audio source sound richer and more life-like.

The Party comes with a one-year warranty. In my tests, its battery lasted for nearly 7 hours of continuous use — perfect for a picnic or day of back-to-back presentations. 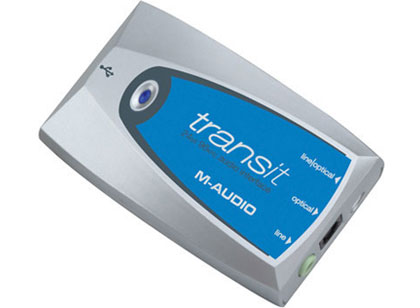 We usually think of USB as a way to attach keyboards, mice and printers to a laptop, but it can also be used to upgrade the laptop’s audio ecosystem. M-Audio’s Transit card plugs into a USB port and replaces the notebook’s audio chip and amplifier, creating a 24-bit sound superstar that leaves CD-quality sound in the dust.

The device comes with a slew of high-end software that takes about 10 minutes to install. It works with Macs and PCs, although not Vista systems, and includes a one-year warranty. Once it’s set up, Transit takes over your notebook’s audio, delivering clearer, more accurate and lively sound.

You can connect an MP3 player or other external audio source, headphones or speakers to the Transit via standard audio jacks or high-quality SPDIF digital optical cables; with the latter you’ve got the best sound this side of a desktop PC.

The downside is that the device is a bit clunky for a small notebook, but it’s worth it if you’re a digital audiophile on the go. 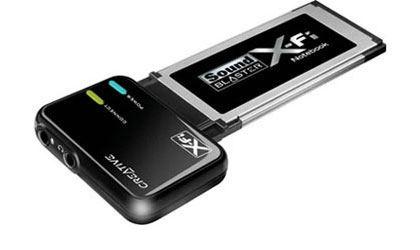 Like M-Audio’s Transit, Creative Technology’s SoundBlaster X-Fi Notebook sound card can transform laptops into audio powerhouses, but it uses the Express Card interface instead of USB. After you plug the X-Fi into the Express Card slot and let the drivers load, the laptop is able to faithfully reproduce crisp and balanced 24-bit audio. Figure on spending 10 minutes to get it going.

The card’s Xtreme Fidelity digital effects can help poorly recorded or converted digital tracks sound more realistic and dynamic, with greater clarity. The X-Fi offers the expected microphone, speaker and headphone jacks, and it can also beam whatever is playing on the notebook as far as 100 feet away to a $70 Creative wireless receiver (you can buy the sound card and receiver together for $150).

While it’s not as clunky as the Transit, the X-Fi sticks out of the laptop by about an inch and a half, and works only with Windows XP or Vista PCs. It’s covered by a one-year warranty. 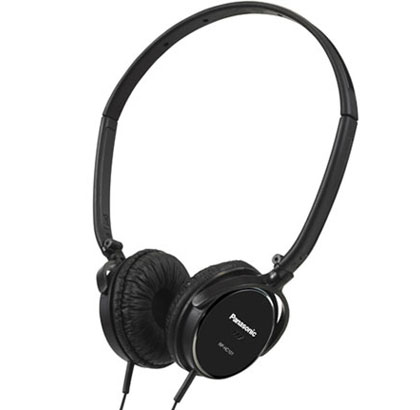 The worst part of a notebook’s sound system is that it can’t compete with the racket — from cubicle conversations to street traffic — of the real world. That’s where noise-canceling headphones, like Panasonic’s RP-HC101, come in.

The RP-HC101 listens to the world around you and creates an opposing waveform that cancels out the most offensive ambient sound, reducing the hum of an air conditioner or the rattle of train wheels to next to nothing. The headphones have a slim design; they fold flat and weigh just 3 ounces, making them more suitable for travel than many other noise-canceling headphones. The best part is that you can wear them for hours without discomfort or headaches.

The noise-canceling circuit has an on-off switch as well as a volume control; it requires an AAA battery. The RP-HC101 headset plugs into any laptop or digital music player via the standard audio jack and lets the music shine through. Too bad the warranty only lasts for 90 days. 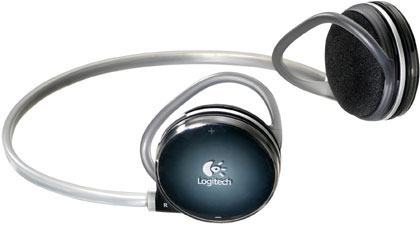 Wires get in the way of music, and cordless headphones can give you the independence to move around without losing your groove. Logitech’s FreePulse headphones weigh just 3 ounces, fit comfortably over the back of the head and can connect via Bluetooth.

Don’t worry if your laptop doesn’t have Bluetooth, because the package includes a rechargeable transmitter that plugs into a standard audio jack. An AC charger and six plastic adapter plates for a variety of iPods are also included.

There’s no software to load and the headphones connect in a few seconds, providing rich and accurate audio. They’re light and comfortable for listening to a single song or all of “Quadrophenia.” Logitech includes a two-year warranty.

Note, however, that the wireless range is limited to 33 feet — which means you can use them across a room or two but not throughout the house — and the internal batteries run down after 5 to 6 hours of use. 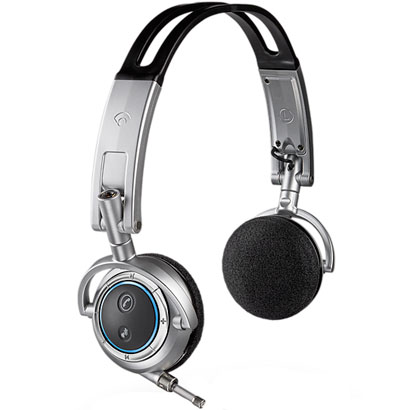 Do you constantly switch between listening to music on your laptop and making and taking calls on your cell phone? You don’t have to give up top-quality sound to talk on the phone — the Plantronics Pulsar 590A headset excels at both. It includes a rechargeable Bluetooth transmitter that plugs into your laptop’s audio jack and an AC adapter.

The headset interrupts the music from your notebook when a call comes in on your Bluetooth-enabled cell phone. I quickly got used to working the buttons on the right earmuff for controlling the music and taking calls. Pairing a new Bluetooth device requires turning the device off and on.

The sound is crisp, clear and balanced, and the microphone picks up every word. The set worked with both my laptops and a Sony Ericsson W580i cell phone, ran for nearly 9 hours on a charge and had an exceptional range of 50 feet.

Pay no attention to the Pulsar 590A’s $250 retail price tag; the product is being phased out (but should be available in stores until well into 2010), and you can find it at a variety of online outlets for about $130.

Price: $130 at many online stores
Available from: Amazon.com and other online retailers

Brian Nadel is a frequent contributor to Computerworld and the former editor in chief of Mobile Computing & Communications magazine.

How to use your smartphone as a Wi-Fi hotspot

14 Windows 7 widgets to monitor your PC