When my iPhone 4 couldn’t cut it anymore and I was given free reign to pick my next smartphone I did a lot of research. It was pretty close between the HTC One, Samsung Galaxy S5 and the Nexus 5.

I decided to go for a pure Android and picked the Nexus 5. I liked the flexibility of the OS as well as the device’s form factor. The Nexus 5 has a very big screen, but also a very thin and sturdy portable size. I found the Galaxy a little large, the HTC One very brittle, and iOS was just too rigid for my liking.

My setup consists of my main apps on the home screen but not cluttered, just the dock and 4 commonly used icons. The other screens are grouped by type. My Gmail inbox widget takes a full screen (not shown). Another screen is for social apps and common tools. Lastly, I have a screen for sports and weather alongside lesser-used icons.

One fated morning I woke up and started my routine as per normal. I put on a pot of coffee, chose my clothes from my wardrobe for the day, and went to grab

I was using Nova launcher for a few months and really liked it but have more recently done an app cleanup and switched back to the default Google Now launcher. I like the ability to add a launcher and transform my phone’s UI and will probably explore a few more when I grow bored. 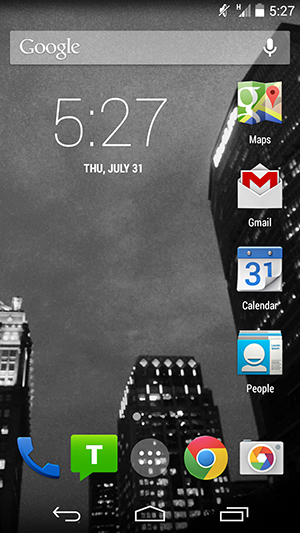 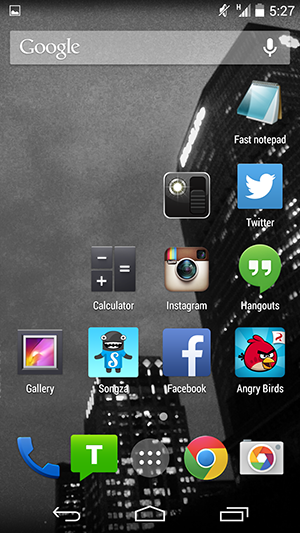 The majority of my configurations were related to extending the battery life of my device. My goal was to be able to forget my charger for a weekend away and be able to make it to Sunday with some juice left. By default, my battery life was around 16 hours after these tips I was abel to extend it to around 48 hours of regular use. 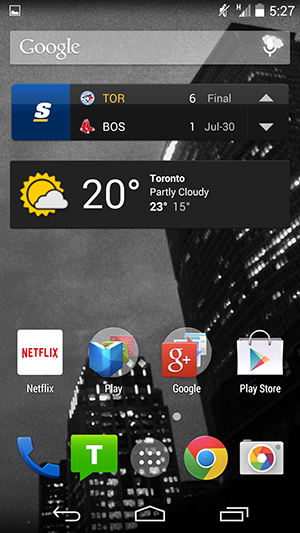 From the top of the Settings menu, tap Wi-Fi. Be sure to hit the actual word “Wi-Fi” and not the toggle button to the right of it. From the next screen, hit the three-dot menu button and select Advanced. Select either “Only when plugged in” or “Never.”

If you don’t use it then turn it off in Settings -> More to extend battery life.

The biggest improvements I noticed in regards to battery life were all screen related. It makes sense, as the massive screen is the largest drain on the battery. Adjusting the sleep time to trigger after 15 seconds of inactivity from the standard one minute made a huge difference right away.

You can turn off auto brightness and adjust it to 25 per cent or so and that will also make a huge difference. I also found that selecting a very dark image as a background makes a noticeable difference.

To enable ART on your Nexus 5: Settings > About Phone, then tap “Build Number” seven times (yes, you read that right). Then back out and go into the new settings sub-menu that appears, Developer Options, and select ART instead of the Dalvik Runtime.

Turn location reporting and history off

Turbo Tip : When you are charging your phone put it in airplane mode and it will charge in half the time.

Google finally hangs up on Hangouts, says auto migrations to Chat begin in 2021