With its massive 10-foot body, sporting intake and exhaust components, and six red propeller blades — each measuring 4.5 feet, one would think all the contraption needed were wings to lift it off the ground.

Alas the dazzling display is earthbound and a mere plastic mock-up – albeit the first ever full-scale turbo prop aircraft engine model.

All 188 components of this counter-rotating aircraft engine were “printed” out of moulded plastic on a car-sized 3D printer.

The parts may move as they should but they’d certainly melt if you ever try to fire up the engine.

Yet if a production model were ever to be manufactured, this dummy — it’s creators say — would have already saved the builder 97 per cent in expenditure and 83 per cent in production time. 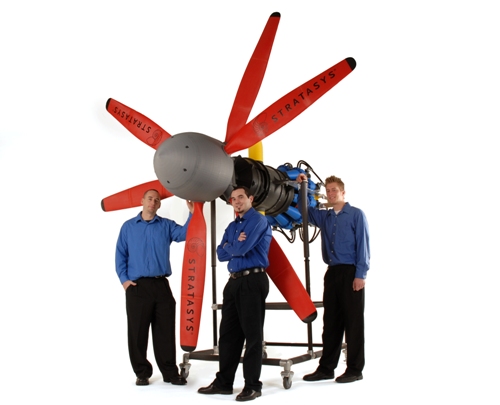 The model meant to serve as a proof-of-concept for all these cited benefits was created by Stratasys Inc. an Eden Prairie, Minn-based maker of additive fabrication machines.

The design was provided by Nino Caldarola, Winnipeg-based applications specialist and engineer for Imaginit Technologies.

He said using 3D modeling software from Autodesk Inc., designers were also able to calculate stress loads and determine performance parameters of the design even before proceeding to the physical production phase.

Traditionally, designers and engineers would need to make expensive working models, built to scale, to determine the feasibility of an engine design.

“Hopefully this project will make manufacturers aware that a designer can conceive and design a product this significant, and have it physically modeled within six weeks,” he said.

The need to design a counter-rotating turbo prop engine was felt strongly by Caldarola a long time ago.

“My passion has always been aircraft design,” the Imaginit engineer said.

He said he thought of grafting the counter rotating propeller design on Italian made Piaggio Avanti II aircraft engine some two-and-a-half years ago.

Counter rotating propellers makes use of a set of blades that push forward and another that pushes pulls back.

The result, Caldarola said, would be power gains of about 20 to 45 per cent for turbo prop engines without the energy cost associated with pure jet engines.

Caldarola designed his engine on Autodesk’s 3D mechanical design tool Inventor and then brought that drawing to Fortus 3D Production System, the middleware developed RedEye on Demand, a prototyping and modeling subsidiary of Stratasys.

Caldarola estimates he spent about 250 hours drawing the design. The team spent about three weeks printing the 188 individual thermoplastic components and about two weeks to assemble them together.

Without the use of 3D design software, Caldarola believes he could have easily spent three to six months on drawings alone.

Other design tools specifically made for the aeronautics industry were also available. However software tools from industry standards Catia and Unigraphics NX, were more expensive said Caldarola. 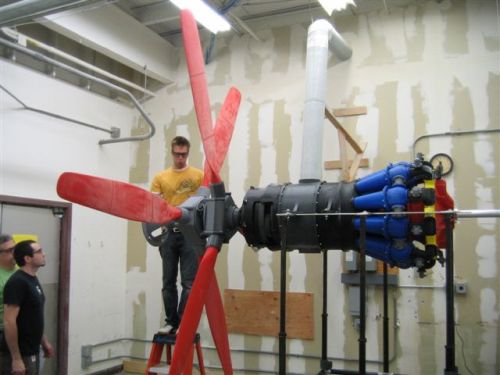 “Inventor was more used in the automotive and machine industry and saddled with being associated with the 2D tool AutoCad,” the designer said.

He said AutoCad is considered an excellent 2D tool but a rudimentary 3D tool, and he wanted to prove that Inventor was producing something comparable to what the big players produced.

“I got a nice surprise when I realized Inventor was able to turn out exceptional rending in components such as rotors, casings and turbine blades,” he said.

But Inventor was not all about eye candy. The software’s digital prototyping features also enabled Caldarola to determine if his design could perform in the real world.

“Features in the software enabled me to calculate factors such as stress loads and help me determine how the design would perform in certain real-world conditions,” he said.

He calculates this feature saved him as much as 60 per cent in the cost of manufacturing a working model.

Caldarola’s engine still need a manufacturer but the designer is sure he’s baby will fly when that time comes.