As I mentioned in my previous blog, I have selected three smart watches to review. These were the Timex Move x20, Garmin Vivosmart, and the Polar A360. I planned to assess each watch after trying them out for at least a month, to give enough time for the good, bad and ugly features to become more apparent.

All three of the watches met my mandatory criteria:

This month I’m reviewing the Garmin Vivosmart, and my final review next month will focus on the Polar A360. The watch is sleek and modern looking, has a small band that displays the time, measures fitness efforts, and provides alerts for incoming phone, texts and Facebook alerts.

The Vivosmart looks like a fitness band rather than a watch. It comes in five colors and costs $105 at Best Buy. To operate it, you double tap on the band or move your wrist.

The double tapping works more often (but not always) than the wrist movement. Once activated, the band displays a wealth of information. This includes the time, date, steps walked, distance and smart notifications. Sub-menus are displayed by holding the band for a couple of seconds. Tapping on the sub-menu symbols reveal additional information such as battery level, Bluetooth connection, synchronization and sleep tracking.

The watch has all the smart watch functions listed above and an indicator alerting that you have been sitting for an hour, encouraging you to move. Though, this can be turned on or off.

Data synchronization is automatic and fast. It can also be manually initiated, using one of the icons on the sub-menu. The Garmin Vivosmart is the only one of the three watches that requires an internet connection to sync the watch with the smart phone.

The biggest issue I had with the Vivosmart is the display. It is small and difficult to read when two lines are displayed such as the date or notifications, especially since the letters are distorted. It would work better to have just one line displayed with an option to display more text. Also, the display stays on for about 5 seconds, not long enough to see and definitely challenging to take a picture of the text distortion.

Below is my attempt, one showing the time and date (which should read THU 07) and the other a text received.

Charging the Garmin Viviosmart is easy compared to the Timex M20 described in my previous blog. It has a unique charging connector that can only be used for the Vivosmart. I had to charge the Vivosmart every 5 days, but the charge didn’t last as long as the watch description promised of 7 days. The charging is the slowest of the three watches I tested and can take over two hours.

The symbols are not always obvious, like how a triangle with an exclamation mark enables vibration notification. The step length can be customized (just like on the Timex) based on the number of steps walked during a specified distance. The documentation is average, but their help desk is knowledgeable and helpful. 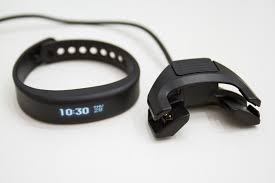 The other issue is that the watch vibrates when it loses connection to the smart phone. According to the help desk, the vibration indicator can not be turned off. In my case, when my iPhone was in the kitchen and I was in the living room (about 10 feet away) when I raised my arm, the watch vibrated as it ceased to have Bluetooth connection and vibrated again when I lowered my arm because it reconnected. It was funny the first two times, rather annoying after.

The Garmin Vivosmart is an adequate watch and fitness band with smart phone features. While the issues I described above are irritating, they are not show stoppers.

Neither of the two watches I have reviewed have a heart rate monitor. The Polar A360 I will review next does.

Stay tuned next month for my final review!