Yes, all good things must come to an end! This is the last of my three part series on smart watches. As mentioned in my previous blogs, I have selected three smart watches to evaluate. These were the Timex Move x20, Garmin Vivosmart and the Polar A360. I assessed each watch after using them for at least two months – and the moment of truth will come by the time you’re done reading this blog.

The first time I became aware of the Polar watch was at the Consumer Electronics Show in Las Vegas last January. I talked to one of their representatives who was very helpful in explaining all the features. His description of the watch’s features convinced me this must be one of the watches I should include in my watch review blogs. I received a demo watch a couple of months ago and have been wearing it since then.

The watch has the largest display of the three and is in color. But the biggest difference between this and the others reviewed is that it has heart rate monitor! It is not something I was looking for but found it useful to determine how hard I was working during my Zumba classes and treadmill journeys.

But let’s start with the basics. The Polar A360 watch face is about .7″ by 1.5″  almost twice as large as the other two watches. It has a color touch screen that is unique to this watch. That plus the heart rate monitor could be the cause of its relatively high price. It is available at SportChek for $274.99 or the Polar website for US $199.95 or $274.99 on their Canadian site. I noticed that the cost on their Canadian site changes as the exchange rate fluctuates and has been as low as $239.95. The cost of this watch is more than double the cost of the other two watches.

For fitness junkies, this watch is heaven-sent. The watch display is activated by either turning your wrist or pushing the button on the lower right side of the watch face. There are different types of watch faces available. The one I chose displays date and time and shows the daily exercise progress through a blue line that is not too obvious for those taking a peak at your watch.

The “training” icon measures specific activities such as group exercise, walking, swimming, strength training, cycling, running and other indoor/outdoor activities. The information displayed for each activity is different. For example, the calorie count for each are counted differently based on the exercise type. Each of these activities have their own specific screens that displays different types of information in different formats such as time and heart rate, or time distance and level of exercise.

At the end of the training, it displays summary screens showing the level of activity, average heart rate, maximum heart rate and heart rate zones showing degree of effort. One of the big differences between this and the other watches I tested is the measuring of activity intensity. The device uses an internal 3D accelerometer to record movements. It analyses the frequency, intensity and regularity of the movement.

The picture below shows the effort expended (by showing the heart rate) during a training session. 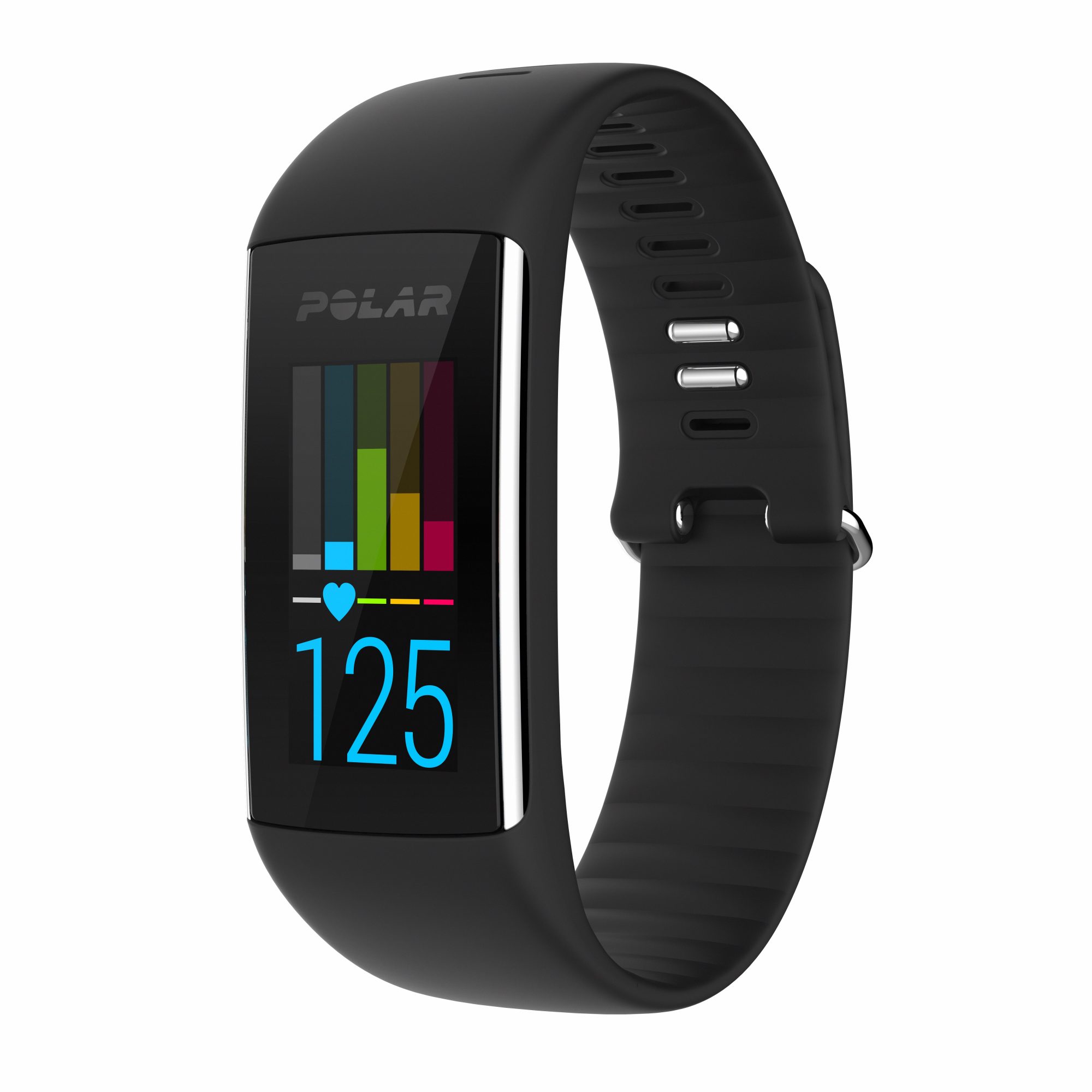 Charging the watch is the simplest and fastest of the three watches I reviewed. It has a standard micro-USB port, a cable that I am already using to charge other devices. This eliminates the need to carry a special charger just for this watch when traveling. The watch only has to be charged once every 6-7 days.

There is a cap that covers the watch’s USB connection, however, it is flimsy and easy to lose. Synchronization has to be initiated with the button on the watch. The Polar A360 doesn’t do background synchronization and it can take up to two minutes to synchronize, in contrast to the other reviewed watches that did so in 30 seconds or less. But the Polar does synchronize with just a Bluetooth connection while the Vivosmart requires internet connection for the Bluetooth synchronization to work.

The activity tracker information, the heart rate monitor and the color touch screen (and the price) features puts the Polar in a different category than the other two watches I evaluated. So I tried to compare it to a watch that also has a heart rate monitor and meets the requirements I mentioned at the beginning of the blog. I spent three weeks looking at the Garmin Vivosmart HR. It is closer to the functionality, size and cost of the Polar A360. The Vivosmart HR is $179 (Polar $279), and is slightly smaller than the Polar. One of the advantages of the Vivosmart HR is that the time and date is always displayed while on the Polar is displayed only if the wrist is moved or a button pushed. 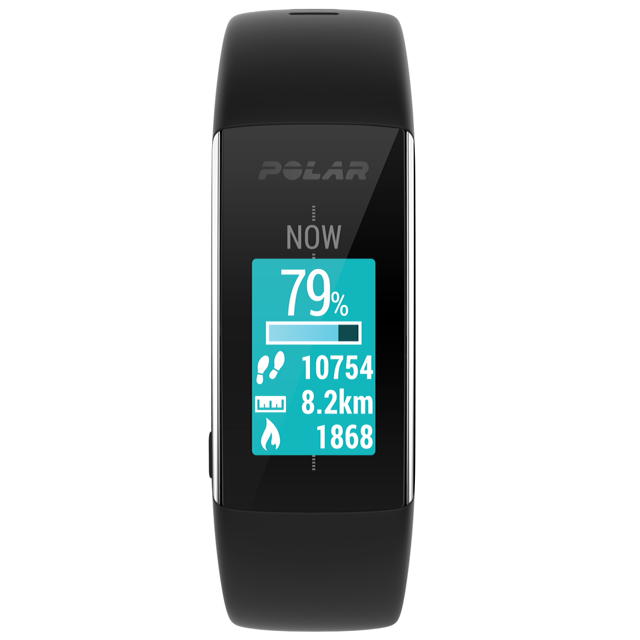 The activity tracker and training mode are not comparable. The Vivosmart HR only has running or cardio mode, while goals are assessed only on the number of steps and flights of steps walked. And the Vivosmart HR has the same issue as the Vivosmart has, Bluetooth synchronization works only if there is an internet connection. This is a real hassle, not just when trying to synchronize if there is no internet coverage but also when traveling on the plane and changing time zones.

Just like on the other two watches, the Polar A360 has statistics on the quality of your sleep. I had no problem wearing any of the three watches while sleeping, though wondered about the accuracy of the statistical reporting on whether I was in a deep or light sleep. So I compared the sleep statistics provided by Polar and Vivosmart HR. While both show the same length of sleep, the Vivosmart HR shows 1:53 hrs of deep sleep while the Polar shows 4:55 hrs of restful sleep. The pictures below show the screenshots of the Vivosmart HR and Polar reports from the same sleep cycle.

While in training mode, the watch measures the heart rate but does not show the heart rate while in “my-day” mode. As well, the statistics shown in “my-day” mode is not available during training. This maybe a disadvantage for people who want to see how much of their daily goal has been met. This information is not available until the training mode is exited.

Also while in training mode the phone call alert works but other smart notifications don’t. That means that you don’t get text notifications until back in “my-day” mode.

If I am inactive for more than an hour, I get a “time to move” message on the watch with vibration as if there is a phone call or text coming in. You can just imagine what this does to me while I’m sitting in a meeting and this message is displayed on the screen and stays there until I either cancel it or get up. To make matters worse, it gives “inactivity stamp” icons (when I don’t get up and move) that the watch tracks and displays as part of the ongoing fitness tracking. But I found out quickly that the “time to move” feature can be turned off, and then the “shame badges” (inactivity stamp icons) don’t show up.

The Polar watch is the only one that doesn’t show the text messages in full as part of the smart notification. It displays the first line and that can’t be expanded. The other watches have a “more” option to display the full message.

Though, the above issues can be easily corrected and don’t take away from the versatility of the watch. It is a feature rich, good looking activity tracker that shows time and date and does smart notification.

So let’s award some honours!

I started this blog because I was looking for a smart watch. So which did I choose?

I was torn between the Polar and the Vivosmart HR. I liked the Polar’s screen, fitness statistics and information. But I chose the Vivosmart HR mainly because the time is always showing on the watch, is smaller in size than the Polar and my exercise program consists of walking and Zumba classes, hence do not need the extensive features that Polar has.

It is amazing how much smart watches have changed since I last looked at them two years ago. There are a lot more features and better statistical reporting. What to expect two years from now? Longer lasting batteries would be a good start! I am hoping there will not be a lot more features just for features sake rather than usability, that the watch sizes won’t increase and that the companies designing smart watches remember that the primary function of a watch is to show time.

I hope you found my suggestions helpful!