I am not a great fan of the ubiquitous pitch competition and have worked along with Derek Anderson, Founder of Startup Grind to try to re-imagine them.

So let’s be clear about what 120mins in the Zone is and is not.

What it is not is an answer to Paul Singh’s recent wondering if “the incredible amount of non-dilutive capital available across Canada” has led to “smart people working on ‘zombie’ companies for too long.”  The evaluation criteria and stated purpose of the event did not ask judges or audience members to consider the viability of the 23 startups that presented, each with 60 second elevator pitches.

I have to admit that part of my disdain for demo days and pitch competitions comes from the personal challenges of being a startup founder myself. It was not me on the spot, trying to boil my life’s work into a 60 second pitch. But I felt vicarious pain as I watched friends like mobd founder, Eric Rogness do a tremendous job leading off the first set of 13 more advanced early stage companies that I was able to catch.

It was obvious that the audience and judges also felt a certain empathy for the courageous founders. In a disproportionate number of cases the green bar that signalled “I’m sold” instant feedback flashed up on screens around the room. Statistically different results for sure than if local venture capitalists and angel investors, many of whom were on hand for the event, were actually casting their votes with their own money or reputation. 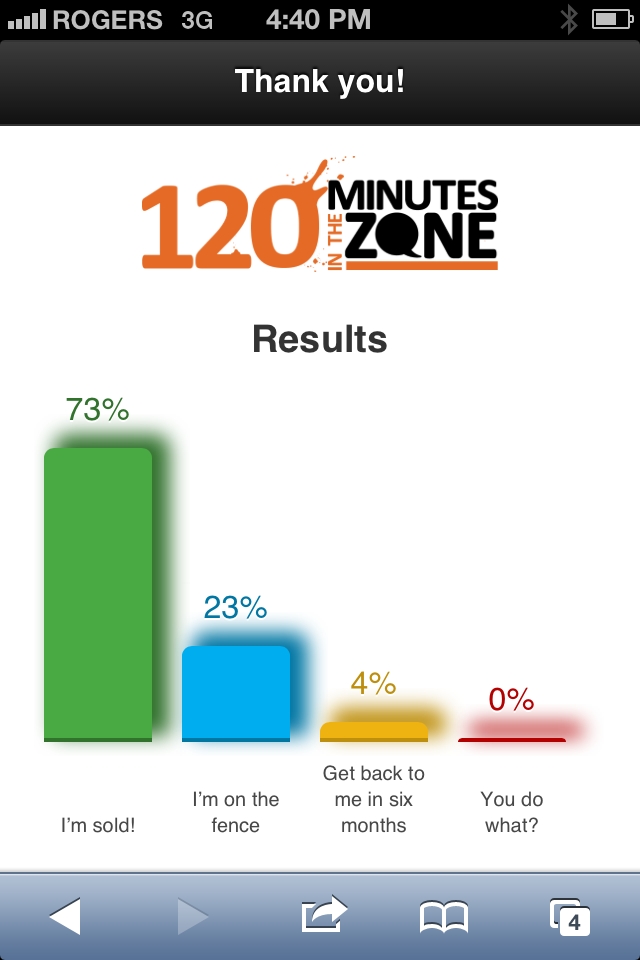 120mins in the Zone is a fantastic effort to re-imagine the traditional pitch competition as a broadcast event fit for the busy media landscape. It leverages all of the strengths of Ryerson’s long-held core competency in journalism and media production studies.

I have seen various efforts to get instant voter feedback technology working properly and almost always, they fall victim to Murphy’s Law. This time it worked! As you entered, you used your smartphone to scan a posted QR code, which guided you into a voting web-app. The screens were perfectly timed to appear so as not to draw your attention away from the pitch. Then everyone voted at once and within seconds results were up on the video wall and monitors around the spacious facility. Exciting!

Discomfort or not, these founders are lucky. Clearly they have all received great coaching to iron their 60 second pitch into a work of art. And DMZ crew, a sea of blue t-shirts at the event, delivered a full house of movers and shakers from across the Toronto startup ecosystem.

Internet gambling: Play at your own risk

Having attracted over US$50-million in investment and closed over $21-million in pre-launch sales for startups in China, the USA and domestically, Michael is living the struggle of the self-funded, pre-revenue Founder in Canada. He understands the pace of global innovation. He founded & funded the Ontario Cross-border Technology Innovation Ecosystem (OCTIE) study and he designed and taught the first, post graduate level, social media course in a full time program in Canada: crowdsourcing over 100 global experts as mentors. Cayley is the Founder of Cdling Capital Services Inc. (pronounced "seedling") a ratings agency that measures risk and builds trust between Founders, Investors and Experts in the era of low cost, globally funded startups and he is the Founder & Director of Startup Grind Toronto.

Dialog with Debow: serial entrepreneur on his new product ‘AM radio for the Internet’