Another first week of January brings another wonderful edition of the International Consumer Electronics Show (CES). The world’s largest annual electronics expo expects to see yet another 150,000 or so attendees and more than 3,200 exhibitors from around the globe. 2014 marks my fourth visit to Las Vegas to attend CES and there is a lot to soak in.

Since I arrived on Sunday, a lot has happened between an exclusive product showcase dubbed “CES Unveiled,” where about 100 or so manufacturers showcase their products exclusively for media and Monday’s day dedicated as a press day.

What will become the top newsmakers of this year’s show? If you were to ask me this question now, before the doors of the 47th CES officially open at 10:00 AM PST on Tuesday, January 7, here are my top seven picks:

Just stepping foot at the CES Unveiled event on Sunday, you could tell wearable technology was going to be a hot topic of CES just based on the number of attendees wearing Google Glass. Aside from the tech attendees are wearing among themselves to the show, manufacturers like Sony are proudly showing wearables such as their Action Cam that competes directly with recording devices like GoPro. At the Sony press conference on Monday, it was amusing – and cute – to see among the accessories available for their Action Cam is a harness for dogs.

At Samsung’s press conference, an executive hinted the Gear smartwatch will one day become a central command device where a user could let Gear know she/ he is leaving the home, and automatically the central air and lights all turn off. We can expect to see more devices like smartwatches release and read more about features enhancements to present models.

A blossoming category last year for Future Shop was fitness. From Fitbit tracking devices to the Jawbone Up bracelet, Canadians scooped them up in advance of New Year’s resolutions to get fit, as holiday gifts, or have a better system to track fitness and lifestyle habits. With mobile devices and apps making it easy and in some cases cool to brag socially about meeting fitness goals, fitness products, including going beyond the bracelet trackers we saw emerge in 2013, will be prominent on the CES show floor.

Ultra High-Definition (UHD) televisions made an impact last year through major releases from manufacturers like Sony, Samsung and LG. The stunning picture quality and premium price points caught the attention of many consumers and next generation sets are making their debuts this week at CES. They were already showcased prominently by major TV manufacturers at their press conferences on Monday.

Organic Light-Emitting Diode (OLED) televisions was introduced to Canadians late last year by the Korean electronics titans Samsung and LG, and we will see more advancements – including curved form factors. 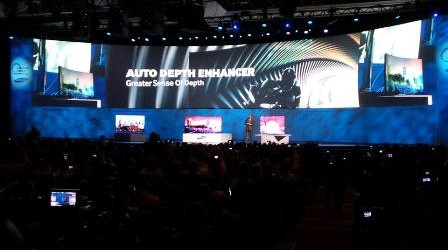 As an ‘80s kid growing up carrying Optimus Prime everywhere I went, I love Michael Bay and his creative and explosive work with the Transformers series. Yesterday, Samsung once again held an exciting press conference, packed wall-to-wall to showcase the latest among their business units, including next generation UHD, televisions. To celebrate the latest curved UHD, Bay was hired to help hype curved UHD and after some apparent teleprompter issues shortly after being introduced by a Samsung executive, he apologized and left the stage. It was one way to get media talking about Samsung UHD – it was a highly Tweeted and written about topic. To read Bay’s statement in response of what happened, read his personal blog here.

Tablets have proved they are not just a fad and indeed a valuable third or fourth screen to Canadians. Their popularity is feeding innovation and manufacturers like Samsung are further expanding their lineups to include even more sizes and functionalities. For example, the new Galaxy Note Pro and Tab Pro offer 12.2” of ‘super clear’ LCD screen real estate and pack a lot of power. The WiFi and 3G versions of the Note Pro is powered by an Exynos 5 Octa processor and the LTE model is equipped with a 2.3 GHz quad-core Snapdragon 800 chip. The front-facing camera offers 2-megapixels and the rear-facing camera has 8-megapixels with LED flash. All this is about 750 grams of device weight. Powerful stuff. 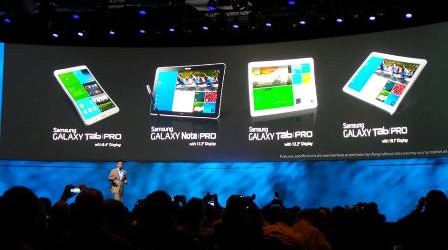 Most big and small kids alike have an affinity for robots. Manufacturers of robotic toys seem to grow in numbers at CES with manufacturers like Parrot making a lot of noise. During CES Unveiled, Parrot attracted media with two new toys aimed for indoor use: the Mini Drone and the Jumping Sumo. 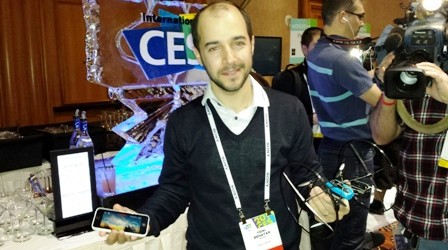 The app controlled Mini Drone flies and is smaller than its predecessors, but the impressive feature is it features two large wheels on each side that allow it to scale along the floor, walls and even ceilings for those who like to fly high.

Aside from its fun Jumping Sumo isn’t a Japanese figurine. It’s an app controlled robot with a built-in QVGA-resolution camera and can calculate and jump amazingly high, up to three feet. It was on display showcasing its hops, carefully maneuvering from one step into a basketball net. See video below:

Each year, CES always brings its share of celebrities. Michael Bay aside, we’ve already seen retired NBA all-star, Shaquille O’Neal make an appearance with Monster Products to promote his partnership of the credit-card slim PowerCard smartphone charging device. He’s been the biggest name to hit the CES floors so far. Entrepreneur and American’s Got Talent show host, Nick Cannon would be a close second, along with movie director, Michael Bay.

Today, CES 2014 kicks off at the Las Vegas Convention Centre. The top seven newsmakers will undoubtedly continue to make noise the rest of the week, but so will other areas, including automobile, health, music and home audio – including headphones makers with their mega celebrities behind them.

What products do you think will shine at this year’s CES? Comment below.