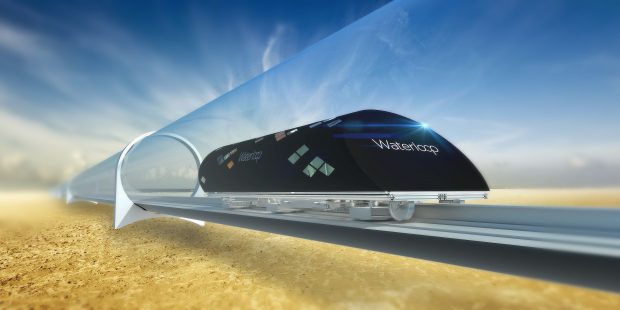 The University of Waterloo’s student engineering design team, “Waterloop,” has earned a place as finalists in the SpaceX Hyperloop Pod Design Competition. The team is now fabricating and will be testing their final prototype pod on a one­-mile test track, outside of SpaceX headquarters in Hawthorne, California later this summer.

“The Hyperloop is a radical new method of transportation, gaining inspiration from the train, the plane and spaceships!” says Waterloop team member, Natalia Zigante. The ambitions for a vacuum tube transit system were re-ignited a few years ago by SpaceX Co-founder, Elon Musk. Initially proposed as a new form of transportation, the idea of a Hyperloop has grown into an international goal, gaining the aspirations from not only industry professionals, but also thousands of students around the world.

Funded and backed by SpaceX, “The Hyperloop Pod Competition” – which is a global challenge – was started in 2015 when University students pledged to help bring The Hyperloop to life.

The competition is separated into 3 rounds. The first one was held in late December, where selected teams sent in their initial designs to be reviewed. From there, 180 teams were chosen to compete at Texas A&M University. Each team set up a booth and a panel of judges critiqued them and chose 31 teams to move onto the final build and test stage.

“The Hyperloop is meant to be a new form of high speed transit. By placing a floating pod inside of a near-vacuum tube, it is possible to go at very high speeds, over long distance, with minimal energy. At Waterloop, we have designed a prototype that is about 8ft long with a 3ft diameter, and is expected to weigh in at around 650lbs. The pod will be designed to reach speeds approaching 360 km/hr.”

A defining feature on the Waterloop pod consists of a 2×2 array of aircaster levitation modules, providedby Airfloat, Align Production Systems. This levitation assembly is capable of lifting a total of 8000 lbs, and allows the pod to glide on a frictionless cushion of air.

When travelling at such high speeds, it is critical that the pod has a method of bringing itself to a full stop. For this reason, the Waterloop prototype employs an eddy current braking system; the same technology used in roller coasters and high speed trains. Eddy current braking is an efficient, non-contact method, using permanent magnets and non-ferrous, conducting rails; It requires no on-board power and provides variable deceleration force dependent on the speed the pod is travelling and the proximity of the magnets to the track’s surface.

“Following our design philosophy, we have been utilizing well understood technologies for our pod to ensure reliability and simplicity. While the technology in the Waterloop vehicle is not fundamentally new, the way in which it is being used, is. For instance, aircaster technology is meant for heavier loads at much slower speeds; but instead, we are reducing the load per caster, increasing the speed by 2 orders of magnitude and putting the entire assembly inside of a vacuum. This will be a world’s first!”

Advancements like this, however, does not come without roadblocks. The Waterloop team is in a particularly unique situation due to the constant fluctuation amongst the team members. The University of Waterloo offers an excellent co-op program, meaning that about 50 per cent of the team is consistently working off campus.

“While this presents a great opportunity for everyone to gain industry experience, it means that building

momentum within the team’s dynamic is much more difficult. Couple that with the fact that this technology is pushing us far beyond the classroom, and we have a very exciting, fast paced, learning environment.”

“There is a tremendous amount of energy from the Kitchener/Waterloo Region’s tech and innovation ecosystem. We can both harness from and contribute to this atmosphere by being at an institution that is at the centre of it all.”

Waterloop’s marketing outreach has gained notice in multiple news outlets and media stations, such as Time Magazine, Betakit, Techvibes, CTV news as well as many University of Waterloo articles. “As we have come a long way since Texas, we recognize that the support and sponsorship from various entities, including Kik, Paypal and League, has been instrumental in helping us move forward.”

“Landing a blog here on ITBusiness presents a fantastic opportunity for our team to keep you up to date on everything Hyperloop! We are hoping to show you how this technology is going to be changing your lives, very soon.”

Check out more of our progress to see updated designs, concept details, or to partner-up with Waterloop and help fund the final fabrication of our prototype. Previous article
Smart watches: It’s time to be picky (part two)
Next article
What you need to know about Pokémon Go