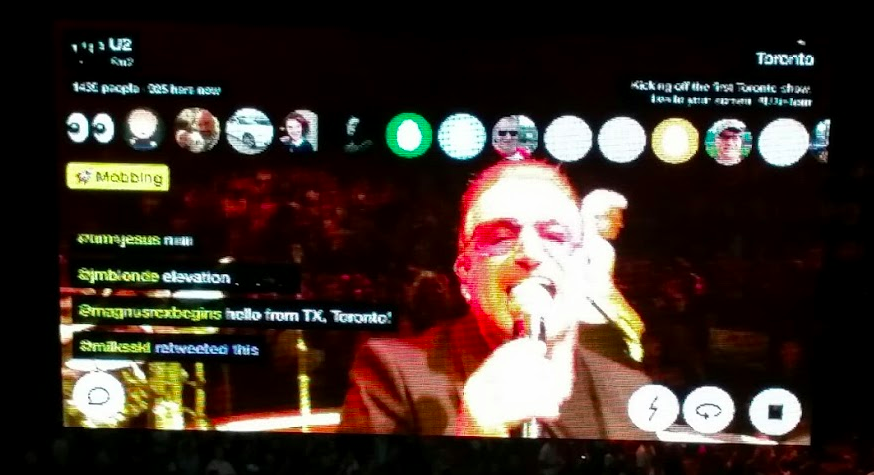 Earlier this year we were introduced to livestreaming apps Meerkat and then Twitter-owned Periscope. While Meerkat grew out of the popular South By Southwest conference in Austin, Texas, Periscope launched as the more polished app, backed by Twitter. After six months in market it seems that Periscope has become the default winner.

However, in these days of social media where things can change on a daily basis, we would be wise to not count out Meerkat (hey, Bono likes it). Here’s a look at how both of these apps have been used to amplify and extend a brand’s presence online.

During their recent tour across North America, Irish rockers U2 took to Meerkat to livestream portions of various concerts. In Toronto, the rock band used the mobile app to livestream their entire show.

U2 has long experimented with social media and technology to reach out and engage with fans. The most notable example was working with Apple to have free copies of their album downloaded for free onto millions of unsuspecting user’s iTunes accounts. So partnering with Meerkat to broadcast their shows so that people could watch and engage band seems to be modus operandi for Bono and the band. The MeerKat stream was even incorporated into the onstage performance, being displayed on a large screen above the band.

After 40 years, U2 continues to invest in ways to stay relevant. Not just with their established fan base but with newer and younger fans.

In my opinion, brands will have an easier time (for now) using Periscope as part of their social media program. And this is due in large part of the tight integration Periscope has with their parent company, Twitter.

Similar to Meerkat, Periscope users are able to livestream events (large and small) from their smartphone. When the recording begins, a tweet can be automatically published from the user’s account to their followers timeline. The final livestream recording is then available to the public to view for up to 24 hours. The broadcaster can choose to save the recording of the livestream to their smartphone for use in subsequent campaigns.

Related
Up Periscope, down privacy? Twitter’s live streaming service bound to cause controversy

Perennial early adopter brands such as Mountain Dew and Red Bull have already taken to Periscope to promote their brand and associated lifestyles. Nestle-owned Drumstick (USA) became the first brand to use Periscope and Twitter in an integrated social media campaign.

Using a combination of owned media and social media influencers, Drumstick launched their ice cream cone treats in conjunction with the summer solstice in a campaign called #FirstDayOfSummer.

Throughout the day, Drumstick amplified tweets of these influencers which led to increased brand awareness. While the results shown above are just a part of the story, one has to assume that a healthy investment in promoted tweets should have led to mass brand awareness and engagement.

Meerkat and Periscope may be the first and most popular livestreaming apps available today. However, like most social media platforms (and other digital media tactics), the best campaigns will be those that are used in a holistic manner rather than “one-off” tactical executions.