Last year when Asus launched the T100 it became an editor’s choice on many review sights as the hybrid tablet and notebook that provided the most value for your dollar. At Computex Taipei buyers, distributors and the public got a chance to see the successor to the Asus Transformer Book Series the T200 which was announced in late May.

So what’s different about these sibling Transformers? For starters the T200 rocks an 11.6-inch screen IPS HD display, although I wasn’t able to confirm the resolution since it’s still a few months from launch. Unlike the T100 it has a rear 5MP camera in addition to a 2MP front facing camera which is an improvement over the 1.2MP front camera of the T100.

One nice thing about the tablet itself is that it has a textured back which makes it easy to hold without feeling like you are about to drop it as could be the case with the T100 whose shiny plastic case could make it feel like it could slip out of your hands at any inopportune moment.

As a bigger tablet there is more space for an even larger battery to power its ever larger screen and more power hungry processor. The T200 has a 2 cell 38 Whrs Polymer Battery compared to a 2 cell 31 Whrs battery for the T100. The spec sheet with the T200 says its battery will last for 9 hours compared to 11 for the T100.

It comes with a similar port and button layout as the T100. The keyboard dock on this pre-production model did have 2 USB ports on the dock.

One thing that I wish they would have changed on the T200 is the location of the home key which on most windows tablets is a button on the screen that will take you back to the start screen like the home button on an iPhone.

Here like the T100 it’s located on the left hand back side of the screen where the volume rocker is. When you’re using the T200 in notebook mode it doesn’t really matter because there is a start key built right into the keyboard but when using it as a tablet it is a pain to use. It is just far enough from the edge that you have to reach for it in order to press it.

We’ve gotten so used to having a button at the bottom of our devices, I instinctively tried to press the centre area to take me back to the start screen. This instinct makes it even more annoying but if you plan on using it more as a notebook then it may not matter as much.

The speakers have holes through the case which should make them a little better and hopefully louder than the speakers on the T100 which were completely covered by the plastic cover.

Overall it looks like a solid but more design oriented change with the T200 being faster, bigger and just a little sexier than the T100. About the only practical difference is that you can take pictures from the back camera on the T200. 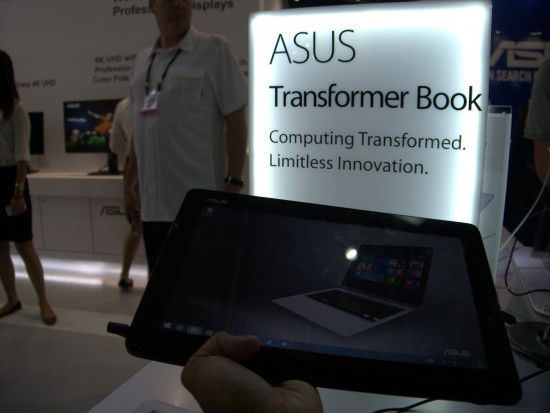 Asking the representatives they would only give a Q3 release window. If it was launching next month, Asus would have probably said so, given that I would think it would launch in late August or early September to coincide with the launch of the school year in North America.

Pricing was not announced but given the similarities to the T100 I can’t see it being just above the T100 but we won’t know until the launch details are finalized and released. So what do you think of the newest hybrid in the Asus Transformer Book line? Would you get it or are you looking for something else?

What Batman can teach you about enterprise CSR
About Eric Floresca

Eric Floresca is a writer who is passionate for technology and currently a world wandering backpacker. He loves uncovering how entrepreneurs are changing our lives through innovation and what it takes to turn their ideas into reality. Eric has a degree in Business from the University of Windsor and has written for Techvibes, The Ad Buzz, and Marketing Magazine among others since he started on his own writer's journey.

Remote work is here to stay in the software and IT industry, says Commit