Apple Inc., the world’s most valuable technology company by market cap, finally turned its innovative energy onto its own Board of Directors, electing its first woman director.

Wagner is eminently qualified.  She graduated with honours from Wellesley College with a BA in English and Economics, and earned an MBA in Finance from the University of Chicago, co-founded BlackRock, an asset management company, in 1988.  She held a range of leadership positions including vice chairman, contributing her leadership to make BlackRock one of the world’s most successful financial companies.

“Sue is a pioneer in the financial industry and we are excited to welcome her to Apple’s board of directors,” said Tim Cook, Apple’s CEO. “We believe her strong experience, especially in M&A and building a global business across both developed and emerging markets, will be extremely valuable as Apple continues to grow around the world.”

But Wagner’s appointment is still not mainstream. Of the Tech 100, largest US technology companies ranked by revenue, only 14.6 per cent of their directors were women, according to a research report by KornFerry titled Tech 100 Boards: Where are the women? from June 2013.

In case you thought we might be doing better in Canada, the Canadian Board Diversity Council’s 2013 annual survey reports only 15.6 per cent of directors on the Financial Post FP500 Canadian corporate boards are women.  Although their reports identify women’s board participation in many sectors, the CBDC doesn’t break out their data by technology sector.  In a 2013 report, the Information Technology Association of Canada (ITAC) said 16.5 per cent of the boards of the 10 largest public ICT companies in Canada are made up of women.

Another view of the women’s corporate leadership comes from Catalyst, whose data takes a look at the whole ladder of women’s participation in  Canadian companies, from employees through various levels of leadership and the Board. Here’s the picture of the data pyramid of women’s leadership across all business sectors in Canada: 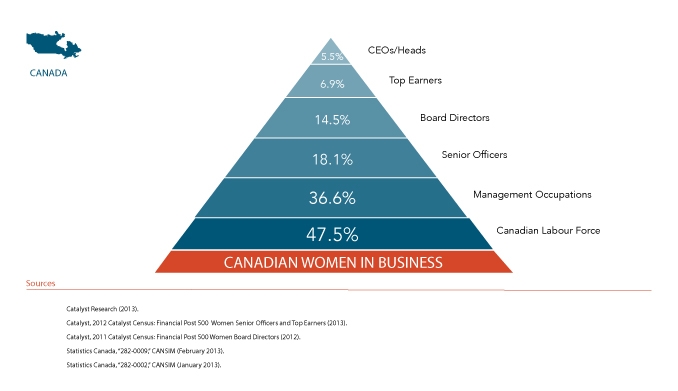 Meanwhile back at Apple, Art Levinson, Board chairman says: “We conducted an exhaustive search for someone who would further strengthen our board’s breadth of talent and background, and we are delighted to have identified such an outstanding individual. I’m confident that Sue is going to make an important and positive impact on our company.”

Expanding the breadth and depth of not just talent, but also experience, background and perspectives, is what’s really at issue in bringing more women onto boards.  Research supports that companies with more diverse boards are more successful on average.  Credit Suisse, in its report on gender diversity and corporate performance, analyzed 2,400 companies for six years starting in 2005 to find that companies with one or more women on their boards, performed higher on key measures including higher Return on Equity (16 per cent vs. 12 per cent) and higher Net Income growth (14 per cent vs. 10 per cent).

While one woman on the Apple board may not be a guarantee of future performance, it’s a step in the right direction in terms of bringing diversity and a broader consumer perspective to the business. “I have always admired Apple for its innovative products and dynamic leadership team, and I’m honored to be joining their board,” said Wagner.

And it’s also a step in the right direction for gender diversity in the technology sector given Apple’s stature.