A CIO at CES: The weird, the wacky, the wonderful – final gadget roundup

From my point of view: lots of very large (up to 110″) TV screens, curved screens, drones, concept cars and home appliances that are connected. Those are the items I expect at CES, so I tend to skip them. I like to look at gadgets that are unusual and have practical uses, rather than just cool technology. But there is an odd side of me. I enjoy looking at some of the weird gadgets. There is one more important aspect for the technology gadgets that I value, it must be easy to use. I get really frustrated with any technology that is difficult to use.

Let’s get back to my main impressions from CES. First I want to answer all the people who asked me what I bought. Nothing! The CES is a show of upcoming technologies, not a place to buy things. It is a place to learn about trends, Many of the technologies are prototypes or not available until later this year. Second, as I mentioned in my previous blog, it was the year of the sensors that had more features and were a lot cheaper than last year.

Now for the highlights and since we are in the award season, let’s look at my personal “awards.”

I’d like to start with the “least user friendly” award. It goes to the Timex Move x20. As I mentioned in my blog, it demands agility and patience to charge the watch. I like the watch and have been using it instead of the Pebble watch, I was wondering if the charging mechanism could be improved. So not being of a shy, introverted nature, I went to visit Timex at its CES booth and talked to the Timex folks. I shared my frustrations with the charging issue. They agreed that it is an issue and not likely to change. Not a good answer, especially with the growing number of watches shown at CES with the same features. I stopped counting after seeing such watches in 10 different booths. They were all similar to the Timex, but easier to charge.

The “cuteness” award goes to Edwin, a smart toy at $99. It is a duck that can tell an interactive story, sing songs, indicate when the water is warmer than the set temperature, and can also be a nightlight. Edwin comes with a display supporting over 100 colours and can play games in the water or on land. It can also create parent-specified alerts and runs on both Android and iOS.

Most Hard to Believe It Exists Award 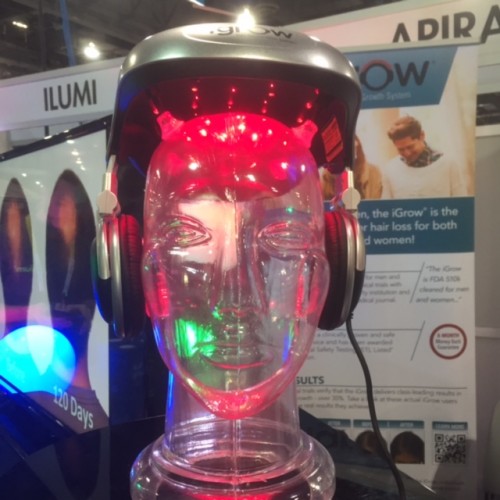 The “hard to believe” award goes to iGrow. It claims to be the best solution for hair loss for men and women. It advertises that it is the world’s most convenient and effective in-home hair growth system that strengthens hair follicles and generates cellular growth. How can you not want to find out more about it? So I visited the booth and saw a hockey helmet-looking thing that supposed to provide a low level laser therapy and if you wear it regularly for six weeks, you’re supposed to notice an improvement. It costs around $700 and does come with a six month money-back guarantee.

A Hammer Without a Nail Award 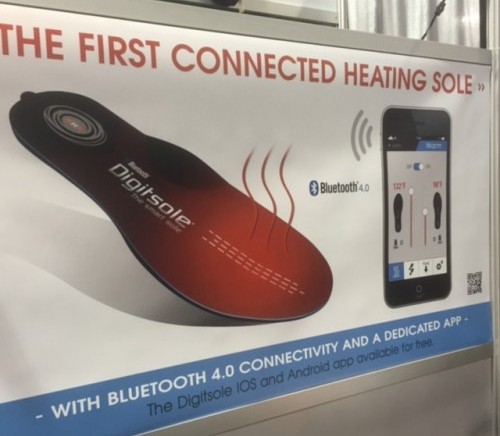 The “technology hammer looking for a nail” award goes to Digitsole, which is offering an insole that fits in the shoe and has a Bluetooth connection to your smartphone. It can warm your feet, according to the temperature you set on your smartphone, tracks the number of steps distance, calories burned, and altitude. The Digitsole can maintain 30 C for eight hours before it has to be recharged. The smartphone app that you can use to set and monitor your Digitsole is available on both Android and iOS. It sells for $199.

I Want it Now Award 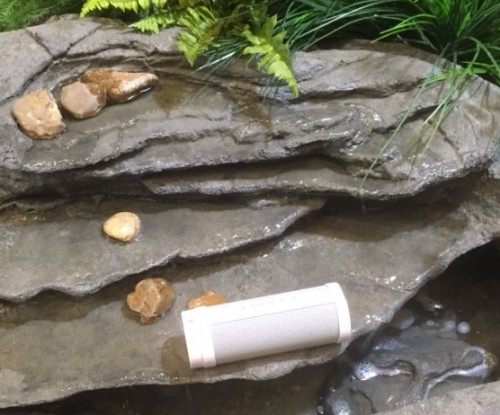 The “I want it now” award goes to TDK trek flex, a rugged Bluetooth speaker that’s about 10″x3″ and fills the room with great sound! It is shock proof, waterproof, easy to use, works horizontally and vertically and looks nice. It is bit pricey at $130 but the sound is well worth it. Just as with many of the items at CES, half the challenge is figuring out when it is available for purchase and where to buy it.

You Crossed a Line Award 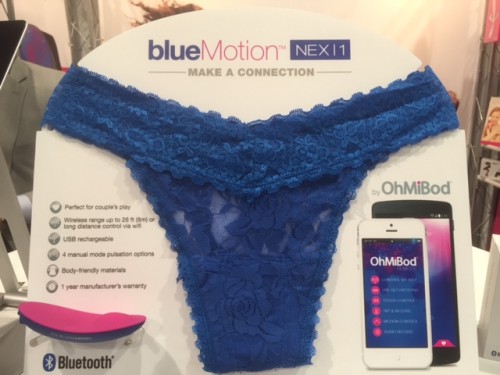 The award for the “technology that takes connecting too far,” AKA “I’m blushing” award goes to OhMiBod blueMotion gadget selling for $130. Let me try to describe it without getting an ‘X’ rating for this blog. It includes a vibrator that fits into the lady’s blue panty, which comes with the kit and there are corresponding devices for the man. These are controlled by the smartphone by tapping on controls to increase or slow down the speed. It has Bluetooth and WiFi capabilities so that the partners could be in different locations while they “use” the application. It claims to have the power of “tantalize and titillate” any time and anywhere. Can you imagine the two people using it being in the same business meeting? 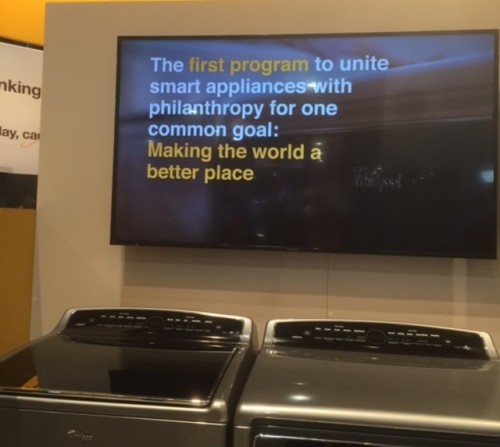 The “good intentions” award goes to Whirlpool, which is a big supporter for Habitat for Humanity. Since 1999, they have contributed more than $34 million in support of Habitat’s goals. It’s new washer and dryer have an option to donate money each time a load of wash is done. The money can be as little as 10 cents per wash. Whirlpool expects that these small donations will add up to a bigger donation for Habitat for Humanity. While the intention is good, it only supports Habitat and I’m not sure people really consider donating while doing their laundry. 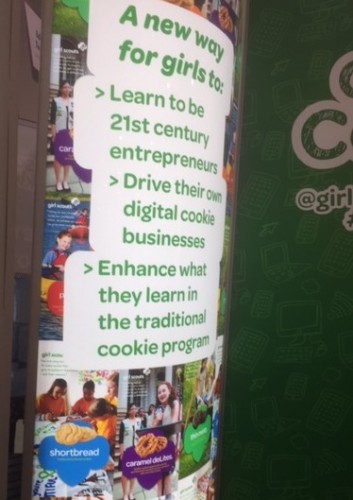 The “brand changing” award goes to the Girl Scouts for going digital. Yes, even the Girl Scouts were at CES. Their real (non-fattening ) cookies are going digital! Their chief digital cookie executive indicated that the digital sales will enhance not replace the existing sales channels. I was impressed by the Girl Scouts and their initiative to teach girls about doing business online as well as having a booth at the CES with young girl scouts being part of the staff at the booth. When I asked one of them whether it is tiring being at the booth all day, she looked at me with a big smile and said that all the people visiting will remember them and what they are doing! And she was right, I will remember.

There was so much technology at the CES 2015, some just for show, some useful, some great! I tried to cover those that I found interesting or bizarre. I’d be interested in hearing about your thoughts on the items I covered. Use the comments section below.

Previous article
Belts, buckles, and business cards: sensors are in everything at CES 2015
Next article
Internet of Things in 2015: Security threats continue to grow